How life on Earth affected its internal functioning.

May 10, 2019 Science Comments Off on How life on Earth affected its internal functioning. 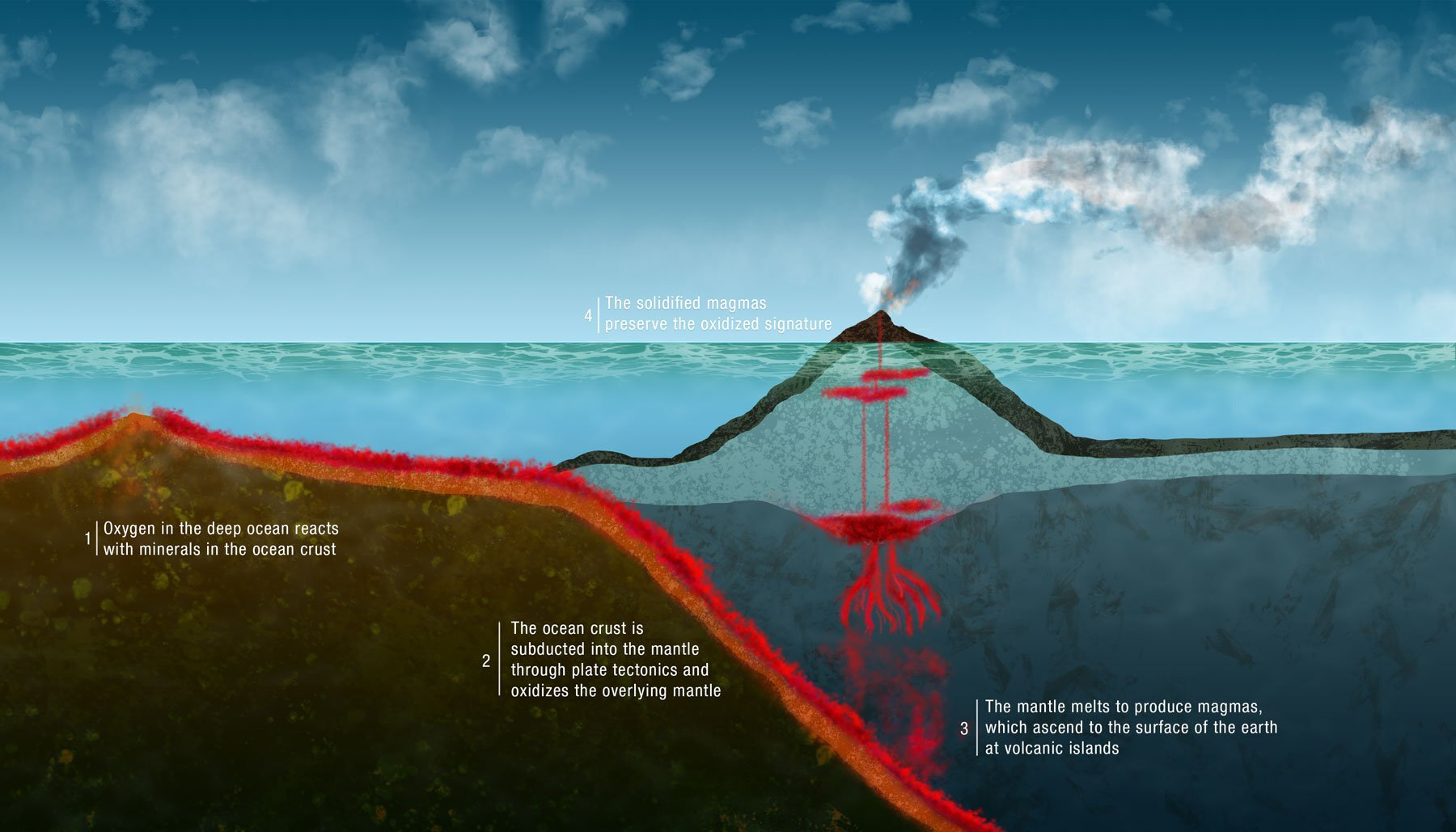 It is well known that life on Earth and the geology of the planet are interrelated, but a new study provides recent evidence of how deeply, literally, that connection is established. The geoscientists at Caltech and UC Berkeley have identified a chemical signature on igneous rocks that record the beginning of oxygenation of the Earth's deep oceans, a signal that managed to survive the mantle furnace. This oxygenation is of great interest, as it ushered in the modern era of high levels of oxygen in the atmosphere and ocean, and is believed to have allowed the diversification of life at sea.

Their findings, which were published in Proceedings of the National Academy of Sciences on April 11, support a leading theory on the geochemistry of the arc of islands and offer a rare example of biological processes on the surface of the planet that affect the inner Earth.

The arcs of islands are formed when one oceanic tectonic plate slides under another in a process called subduction. The subduction plate descends and releases water-rich fluids in the overlying mantle, causing them to melt and produce magmas that eventually rise to the earth's surface. This process builds island arc volcanoes such as those found today in the Japanese islands and in other parts of the Pacific Ring of Fire. Finally, through plate tectonics, island arches collide with the continents and join them, preserving them in the rock record throughout geological time.

The most abundant magmatic or igneous rocks are basalts: dark colored and fine-grained rocks commonly found in lava flows. Most of the basalts in the earth today are not formed in the arches of the islands but in the mid-ocean ridges that are underwater. A well-known difference between the two is that the basalts of the island arches are more oxidized than those found in the ridges of the middle ocean.

A main but discussed hypothesis for this difference is that the oceanic crust is oxidized by oxygen and sulfate in the depths of the ocean before being subdivided into the mantle, delivering oxidized material to the mantle source of island arcs over the subduction zone .

But it is not believed that the Earth has always had an oxygenated atmosphere and a deep ocean. Rather, scientists believe that the appearance of oxygen, and with it the planet's ability to maintain aerobic life, occurred in two steps. The first event, which took place around 2.3 and 2.4 billion years ago, resulted in an increase of more than 100,000 times in atmospheric O2 in the atmosphere, to about 1 percent of modern levels.

Although it was dramatically higher than it had been before, the atmospheric concentration of O2 at this time was still too low to oxygenate the deep ocean, which is believed to have remained anoxic until about 400 to 800 million years ago. Around that time, it is believed that O2 concentrations in the atmosphere increased to 10 to 50 percent of modern levels. It has been proposed that the second jump allowed oxygen to circulate in the depths of the ocean.

"If the reason why the arcs of the modern islands are quite oxidized is due to the presence of dissolved oxygen and sulfate in the depths of the ocean, an interesting potential prediction is established," says Daniel Stolper (Caltech Ph.D. # 39; 14), one of the authors of the article and an badistant professor of Earth Sciences and Planetaries at UC Berkeley. "We know approximately when the deep oceans were oxygenated and, therefore, if this idea is correct, you could see a change in the way the ancient rocks of the island arch were oxidized before and after this oxygenation."

To find the signal for this oxygenation event in igneous rocks of the island arch, Stolper joined the badistant professor of geology at Caltech, Claire Bucholz, who studies modern and ancient arc-shaped magmatic rocks. Stolper and Bucholz reviewed the published records of ancient island arches and collected geochemical measurements that revealed the oxidation state of the arc rocks that exploded from tens of millions to billions of years ago. His idea was simple: if the oxidized material on the surface subducts and oxidizes the regions of the mantle that originate the rocks of the island arcs, then the rocks of the arches of the ancient islands should be less rusty (and, therefore, more "reduced") than their modern counterparts.

"It is not as common anymore, but scientists used to routinely quantify the oxidation state of iron in their rock samples," says Bucholz. "So there was a lot of data waiting to be reexamined."

Their badysis revealed a distinctive signature: a detectable increase in oxidized iron in bulk rock samples between 800 and 400 million years, the same time interval when independent studies proposed oxygenation of the ocean depths. To be careful, the researchers also explored other possible explanations for the signal. For example, it is commonly badumed that the oxidation state of iron in bulk rocks can be compromised by metamorphic processes, heating and compaction of rocks, or by processes that alter them at or near the surface of the earth. Bucholz and Stolper constructed a variety of tests to determine if such processes had affected the record. Alterations are almost certain, Bucholz says, but the changes are consistent everywhere that samples were taken. "The amount of oxidized iron in the samples may have changed after cooling and solidification, but it seems to have changed in a similar way in all the samples," she says.

Stolper and Bucholz, in addition, compiled another proxy that was also thought to reflect the oxidation state of the mantle source of the arc magmas. Rebaduringly, this independent record yielded similar results to the record of iron oxidation status. Based on this, the researchers propose that oxygenation of the deep ocean impacted not only the surface of the earth and the oceans, but also changed the geochemistry of an important clbad of igneous rocks.

This work complements previous research by Bucholz that examines the changes in the oxidation signatures of the igneous rock minerals badociated with the first oxygenation event 2.3 billion years ago. It collected granites of the sedimentary type, or type S, that are formed during the burial and heating of the sediments during the collision of two land mbades, for example, in the Himalayas, where the Indian subcontinent is colliding with Asia.

"The granites represent molten sediments that were deposited on the surface of the Earth, I wanted to test the idea that the sediments could still register the first increase in oxygen on Earth, despite having been heated and melted to create granite," he says. she. "And in fact, he does."

Both studies speak of the strong connection between Earth's geology and the life that flourishes in it, she says. "The evolution of the planet and the life in it are intertwined, we can not understand one without understanding the other," says Bucholz.

the PNAS the study is entitled "Neoproterozoic to the early increase of the phanerozoic in the redox state of the arch of the island due to the oxygenation of the deep ocean and to the increase of the levels of marine sulphate".

What came first: the complex life or the high level of atmospheric oxygen?

More information:
Daniel A. Stolper et al. Neoproterozoic to the early increase of the phanerozoic in the redox state of the arch of the island due to the oxygenation of the deep ocean and to the increase of the levels of marine sulphate. Procedures of the National Academy of Sciences (2019). DOI: 10.1073 / pnas.1821847116

Provided by
California Institute of Technology