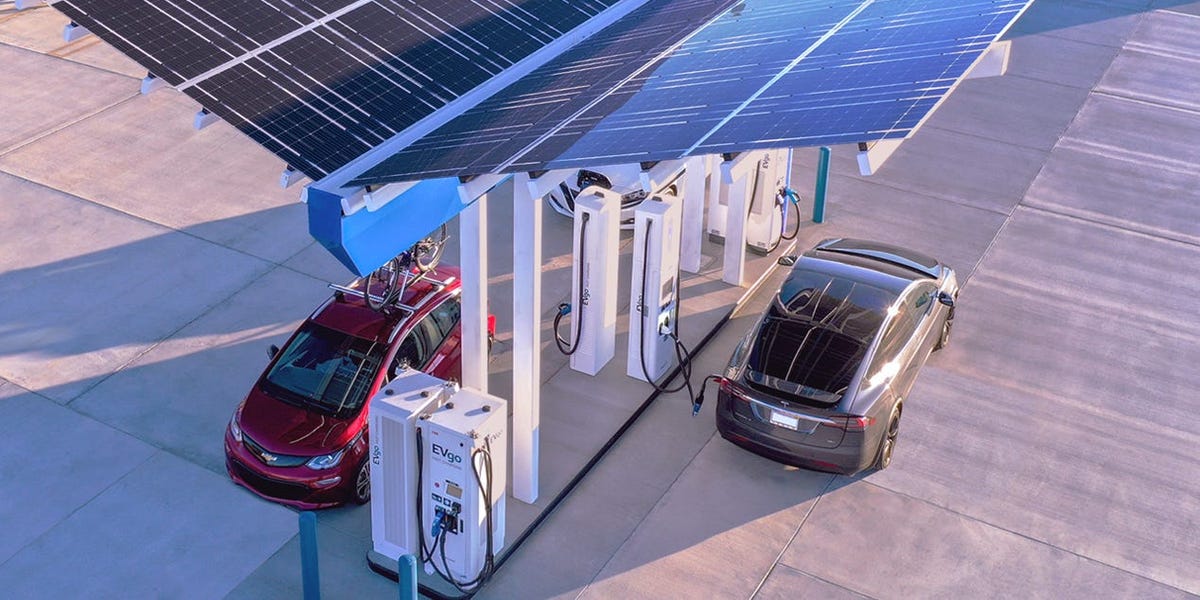 With plans to eliminate the country’s carbon footprint by 2050, Joe Biden could easily be the greenest president in American history. But achieving such a flashy goal will take a lot of work in much more mundane areas, like having enough places to charge a rapidly growing fleet of electric vehicles.

Even with 1.8 million battery-powered cars already on US roads, there are only about 100,000 charging outlets for them at about 41,000 public station locations. That disparity makes it easy to see how range anxiety – or the fear of running out of power without a nearby charging point – is one of the biggest hurdles for consumers considering a clean car.

President Biden has pledged to build 500,000 new outlets over the next decade, in an effort to reduce emissions from the highways that are currently the largest source of carbon emissions. To get there, and achieve an all-electric future, five experts and industry leaders say the country will need an aggressive infrastructure plan and a series of green policies to go with it.

The number of electric vehicles in the US may rise to 35 million by 2030, requiring more than 2 million public chargers, projects The Brattle Group, an economic consulting firm. With such a boom on the horizon, charging operators are excited about the prospect of a multi-million dollar federal investment in charging infrastructure that could give a boost to the transition to electric vehicles that is already underway.

“This industry is happening. The question is how much faster it can happen,” Jonathan Levy, commercial director of fast-charging company EVgo, said in an interview. “What we’re really excited about is that the Biden administration recognizes that this is going to happen around the world, and if the United States wants to lead, there will have to be more federal political support to help make that happen.”

But Biden’s plan, and ultimately any action by Congress, could take many forms. Industry leaders and policy experts are divided on the best way to make it happen.

A White House spokesman declined to comment on the administration’s plans.

How to get the ball rolling

Making things happen quickly, which is not the strong suit of the federal government, is a top priority for Drew Lipsher, chief strategy officer at collection company Volta. After all, electric vehicles accounted for less than 3% of all car sales in 2020.

“I think the most important thing the government can focus on to meet projected demand is speed,” he said in an interview. “The more difficult they make it, and the more the process slows things down, it will only hurt the transition to electric mobility.”

“[Tesla] made significant investments early on to establish that no matter where you were in the United States, you could travel with your Tesla vehicle without worrying about range or access to cargo, “he said.” Now the federal government is in a position to look at all electric transportation with the same lens. “

Nigro recommends that the Departments of Transportation and Energy work together to distribute subsidies to providers, potentially through existing channels such as the State Energy Program.

Rebates that incentivize companies to build chargers, or have customers buy them, are another option to stimulate activity quickly.

Anne Smart, vice president of public policy at ChargePoint, a charging company that sells plugs to businesses, fleets and for home use, is particularly excited about the expansion of reimbursements on the consumer side. These can be implemented faster than grants, have been shown to be effective at the state level, and allow the market to function as usual, he said. Customers can choose the charger provider they want and get a few thousand dollars off the label price.

However, according to Volta’s Lipsher, a rebate program to charge companies could hamper progress by incentivizing companies to wait months and years for a rebate to be approved before starting construction.

EVgo’s Levy, who has held positions in the Department of Energy and the Obama White House, says there are risks of building too many charging stations too fast. Charging infrastructure should stay a little ahead of EV ownership and demand, not drastically exceed it, he says.

To make his point, Levy quotes hockey legend Wayne Gretzky’s famous adage about skating where the puck is going to be, not where it’s been. For freight companies, “you want to skate right in front of the puck. If we skate way past the puck that we’re out of the arena, that’s a problem for the industry,” he said.

That’s because overbuilding can affect the economics of the freight business, he said, leading to large numbers of stations that are underutilized and unprofitable to operate.

It is a mistake that has been made in the past, with important consequences. As part of the Recovery Act of 2009, the Department of Energy allocated $ 100 million in grants to a company called Ecotality to build more than 10,000 charging stations. Four years later, Ecotality filed for bankruptcy. An audit from that year found that demand for electric vehicles had not grown as fast as anticipated and that most of the commercial charging stations that Ecotality had built were experiencing low usage.

To avoid similar pitfalls, government clean energy programs could allow funds to be used not only for capital investments but also for operating expenses to close the gap to profitability, Levy said.

Whichever funding model it chooses, experts say the government should be deliberate about where chargers go and what kind of technology is used. Fast chargers, for example, are not necessary on urban and suburban streets where people tend to park for hours. By contrast, the slower Level 2 plugs are not suitable for rural areas or highway rest stops where people only intend to spend 45 minutes.

Then there is the question of fairness.

Targeting major transportation improvements to minority communities is especially important given that they are the hardest hit by the country’s carbon emissions, Anne Shikany, an infrastructure policy expert at the Natural Resources Defense Council, told Insider. But the investment should not be made at the expense of community commitment.

“One thing we would like to see is a lot of consultation with the communities before the infrastructure comes in,” Shikany said. “Talking to the communities and making sure the material you want to provide is tailored to their needs is incredibly important.”

Cargo is just one piece of the puzzle

Cargo is just one piece of the puzzle in the country’s transition away from gas-powered cars. And the collection companies hope the new administration will go ahead with a host of other measures to boost demand for electric vehicles.

Biden has also pledged to convert the federal government’s entire fleet of some 650,000 vehicles to electricity, and has promised that all buses made in the US will run on batteries by 2030. Charging companies expect an expansion of The current zero-emission vehicle tax credit is also on the horizon.

Emotion aside, the impeachment firms Insider spoke to said they are also prepared to act on their own if the White House does not show up. The train left the station, they said, and the electric vehicle boom is happening with or without the backing of the federal government.

“Politics is also primarily a tailwind the way we see it,” Levy said. “The future of electric vehicles is now, and it is here, and it is happening regardless of anything else.”