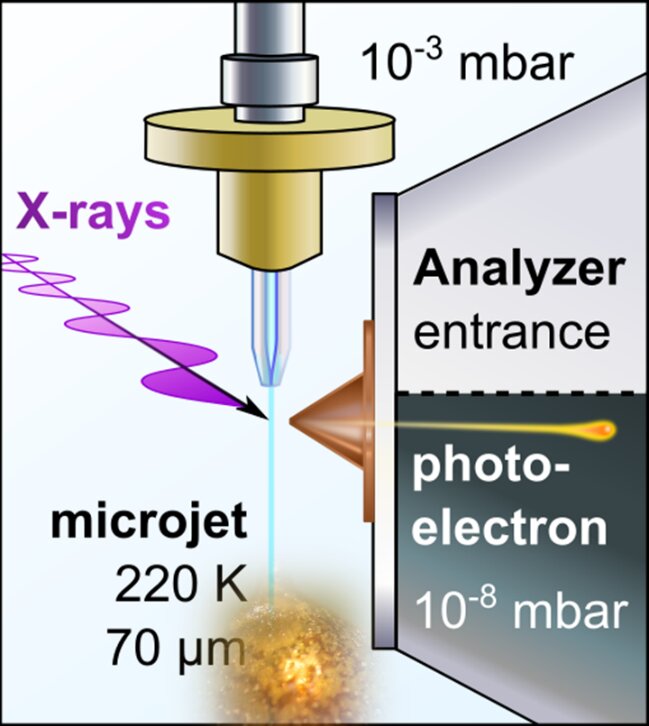 What it means to be a metal? How is a metal formed? These seem like text-book questions with a simple answer: the Metal is characterized by free electrons that give rise to a high electrical conductivity. But how, exactly, is a metallic conduction band formed originally localized electrons, and what is the corresponding microscopic image for the material in question?

In collaboration with scientists from the Czech Republic, the united states and Germany, the research team of Pavel Jungwirth, Institute of Organic Chemistry and Biochemistry of the Czech Academy of Sciences (IOCB Prague) has succeeded in mapping at the molecular level the electrolyte-to-metal transition in alkali metal—liquid ammonia solutions using a combination of photoelectron spectroscopy (PES) and electronic structure calculations. The results of his research have been published recently in Science.

Alkali metals dissolve in liquid ammonia represent the archetype of systems to explore the transition of blue electrolytes at low concentrations of bronze or gold-colored metal solution (with conductivity comparable to that of a copper wire) with high concentrations of electrons. At the same time, PES represents an ideal tool for the establishment of the electronic structure relevant to this transition. As an ultra-high vacuum technique, PES a long time it was considered incompatible with the volatility of the liquids until the technique of liquid microjets was developed for water and aqueous solutions. However, it was only in the year 2019 that the group of Pavel Jungwirth, in collaboration with colleagues from the University of Southern California, and at the bessy II synchrotron in Berlin performed the first successful PES measurements in a refrigerated polar liquid—pure liquid ammonia.

“This is what happens when you give a group of theory a bit of lab space to play”, says Pavel Jungwirth of the decision of the director of the Institute for the grant of a small laboratory.

This achievement opens the door to PES studies of alkali metal—liquid ammonia systems (as reported in the present document, Science), the map that the electrolyte-to-metal transition for the lithium, sodium and potassium dissolved in liquid ammonia by means of the PSE soft X-ray synchrotron radiation. In this way, the researchers captured for the first time, the photoelectron signal of excess electrons in liquid ammonia as a peak at around 2 eV binding energy. This peak then broadens asymmetrically towards higher binding energies with increasing alkali metal concentration, gradually forming a conduction band with a sharp Fermi edge accompanied by plasmon peaks, both of which are fingerprints of the nascent metallic behavior.

Along with the state-of-the-art electronic structure calculations, these measurements provide a detailed molecular imaging of the transition from a non-metal-to-metal, allowing researchers to better understand the onset of metallic behavior which is characterized by its properties such as high electrical conductivity.

“We hope that the present work in the metal-ammonia opens the way to achieve our more ‘explosive’ idea: the preparation of metallic water by very carefully mixing with alkali metals”, concludes Pavel Jungwirth.

Provided by
Institute of Organic Chemistry and Biochemistry of the CAS