How did the Dodgers and Astros end up at Game 7 of the World Series? 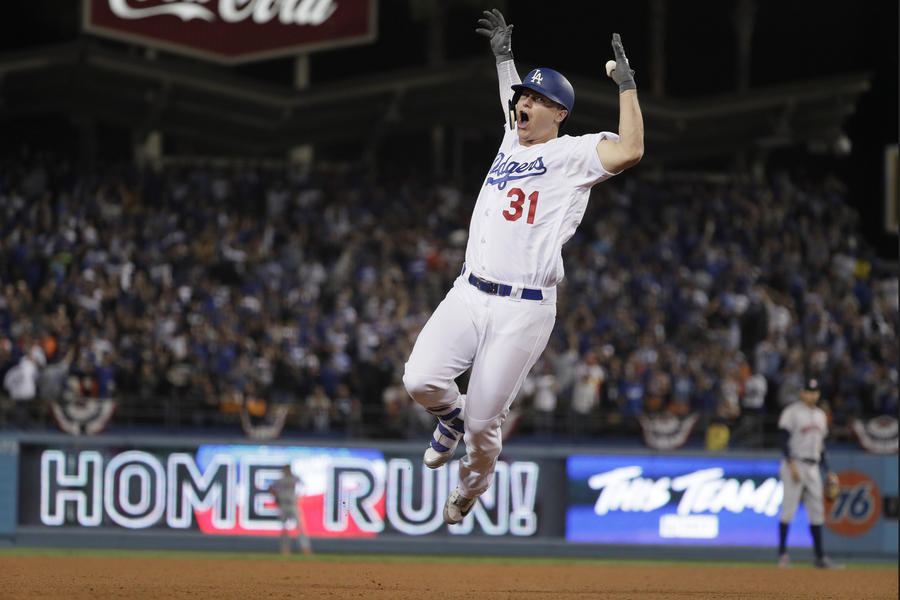 After six heart-pounding games between the Los Angeles Dodgers and the Houston Astros, the 2017 World Series stands at three games apiece. And Wednesday night, Dodgers Stadium will play host to its first World Series Game 7.

But how did we get here? Let’s take a trip through the events of the last eight days and relive some key moments.

Dodgers ace Clayton Kershaw put his bona fides on display in the opening game of the 2017 World Series.

Of the 21 outs recorded during the lefty’s seven-inning gem, more than half came via strikeout. What’s more, only two Houston batters were able to work an at-bat to full count against Kershaw. And eventually both Jose Altuve and George Springer struck out.

Kershaw became the first pitcher in World Series history to strike out 11 or more batters while yielding three or fewer hits without a walk.

The 11 strikeouts were the most by a Dodgers pitcher in the World Series since Don Drysdale fanned 11 batters in Game 4 of the 1965 Fall Clbadic.

Even with Kershaw’s performance, it took a star turn from Justin Turner to lift the Dodgers to victory.

Facing Dallas Keuchel in the sixth inning, Turner took the left-hander’s fourth straight fastball and drove the pitch 371 feet into the left-field stands for a two-out, two-run home run and a 3-1 Dodgers lead.

Turner’s home run in Game 2 of NLCS also came with two outs and snapped a 1-1 tie.

Tied at 5-5, Astros outfielder George Springer hit a two-run home run in the top of the 11th inning that proved to be the game-winning RBIs.

But it took Chris Devenski striking out Yasiel Puig in a nine-pitch at-bat, just after Charlie Culberson’s two-out solo home run brought the Dodgers within a run, before Houston secured the win.

Earlier in the game, a two-run home run in the bottom of the 6th inning from shortstop Corey Seager broke a 1-1 tie and put the Dodgers in a position to win.

Kenley Jansen blew a save by yielding a solo homer in the ninth. And Josh Fields gave up two more home runs in the 10th, only to have the Dodgers tie the game in the bottom of the 10th.

The Dodgers and Astros combined to hit eight home runs, the most ever in a World Series game. It bested the seven home runs that the Oakland A’s and San Francisco Giants combined for in Game 3 of the 1989 World Series.

The combined five home runs in the 10th and 11th innings meant that nearly a quarter of all World Series home runs in extra innings since 1914 came in Game 2.

Houston batters got to Dodgers starter Yu Darvish early and often in the second inning. Darvish gave up four runs and six hits, including a home run by Yuli Gurriel to lead off the inning.

The Dodgers were primed to climb back into the game after Houston’s Lance McCullers Jr. walked three batters on 19 pitches to open the third inning. But the Dodgers’ Corey Seager saw only two pitches before grounding into a double play, and Justin Turner grounded out on the fifth pitch he saw to end the inning.

Already 0-for-2 in Game 4, and stuck in an 0-for-13 stretch, Dodgers rookie Cody Bellinger had struggled in the World Series.

But the rookie hit doubles in the seventh and ninth innings that keyed the Dodgers’ 6-2 win.

After a sacrifice fly by Austin Barnes, Joc Pederson thundered a three-run homer to mute the 43,322 fans at Minute Maid Park.

In his first outing since blowing a save in Game 2, closer Kenley Jansen was not immaculate. He surrendered a solo home run to Astros third baseman Alex Bregman. It was only the Astros’ second hit of the game.

A pitchers’ duel heightened the tension. Alex Wood did not give up a hit until the sixth inning, when Astros outfielder George Springer hit a solo home run. Houston starter Charlie Morton suppressed the Dodgers until the seventh, when Bellinger recorded his first hit of the World Series and Logan Forsythe tied the game with an RBI single.

Morrow entered the game having pitched in 11 of the 12 games Los Angeles had played in the postseason.

Still, Los Angeles overcame a three-run deficit in the ninth inning. Yasiel Puig hit a two-run home run, which set a World Series record with the 22nd in the five games. And a Chris Taylor single tied the score 12-12.

Jansen worked around a double in the ninth, and after the Dodgers failed to score in the top of the 10th, got two quick outs. He then hit Astros catcher Brian McCann with a pitch, walked Springer and gave up a single to Alex Bregman that ended the evening by punching a cutter into left.

Over the course of Game 5, the Dodgers’ chances of winning fluctuated much like L.A.’s weather in the last week. FanGraphs, a baseball-focused website, calculates a team’s win expectancy, or chance of winning, using the game situation and historical data.

For the Dodgers, the chances of winning were as high as 89.2% in the fourth inning and as low as 3.2% in the ninth inning, according to FanGraphs.

Return of the Dodgers’ bullpen dominance

The Dodgers trailed early after George Springer crushed a Rich Hill fastball to right field for a home run in the top of the third.

But the Los Angeles bullpen came through when it mattered.

With two outs in the fith inning, Brandon Morrow came to the mound with the bases loaded. Morrow had appeared in the first five games of the series, and had given up four runs on six pitches in his last outing, in Game 5.

Morrow unleashed a 99-mph fastball to Houston third baseman Alex Bregman, who hit a goundball to Corey Seager at shortstop to end the inning.

The Dodgers’ bats awoke in the sixth inning. Chris Taylor hit a game-tying double, and Seager’s sacrifice fly gave the Dodgers the lead.

Kenta Maeda then protected the Dodgers’ one-run lead, getting Jose Altuve to ground out with runners on first and third to end the seventh inning.

In the bottom half of the inning, Joc Pederson lifted his third home run of the World Series into the left-field stands.

Closer Kenley Jansen locked things down, getting his second career six-out postseason save.