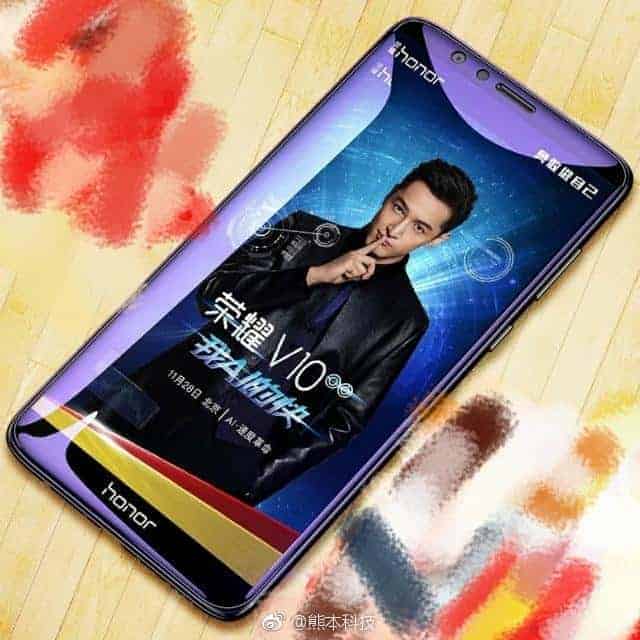 The alleged Honor V10 actually came to light today and showed a design that is different from the previous rumors suggested, well, a real-life picture of the phone has just come to light again. If you take a look at the image provided above, you will see the alleged Honor V10 phone, along with its rather thin bevels. Now, the upper and lower bezels of this phone are noticeably thicker than on the phone that came to light today, and this design actually looks much more believable, read on.

The frames are still quite thin, but they are thicker than they were in the previous image, although the phone looks much more like the device that TENAA (China's equivalent to the FCC) recently reported. In fact, it is likely that this is the final design of the next Honor V10 phone, which is scheduled to arrive on November 28, since Honor will present this phone that day in China, which the company has already confirmed. The company logo will be placed below the screen, while the fingerprint scanner will be located on the back of this phone. Apparently, the device will be made of metal and you will be able to find two cameras on the back of this phone. All physical keys of the device will be placed on the right side of this phone, which probably means that the SIM card tray will be included on the left. The glbad on the top of the Honor V10 screen will be curved, which will be easily noticed when looking at the provided image.

That said, TENAA revealed the Honor V10 specifications recently, well, most of them. The Honor V10 will feature a 5.93-inch Full HD + screen (2160 x 1080), along with 4GB / 6GB of RAM, and will be powered by the 64-bit and octa-core Kirin 970 SoC, Huawei's flagship processor. The 20 and 16 megapixel triggers will probably be included in the back, while the device will ship with a fast charge and a non-removable battery of 3,240 mAh. Android Nougat or Android Oreo will come preinstalled in the Honor V10, while you can find the skin Emotion UI (EMUI) from Huawei on top.