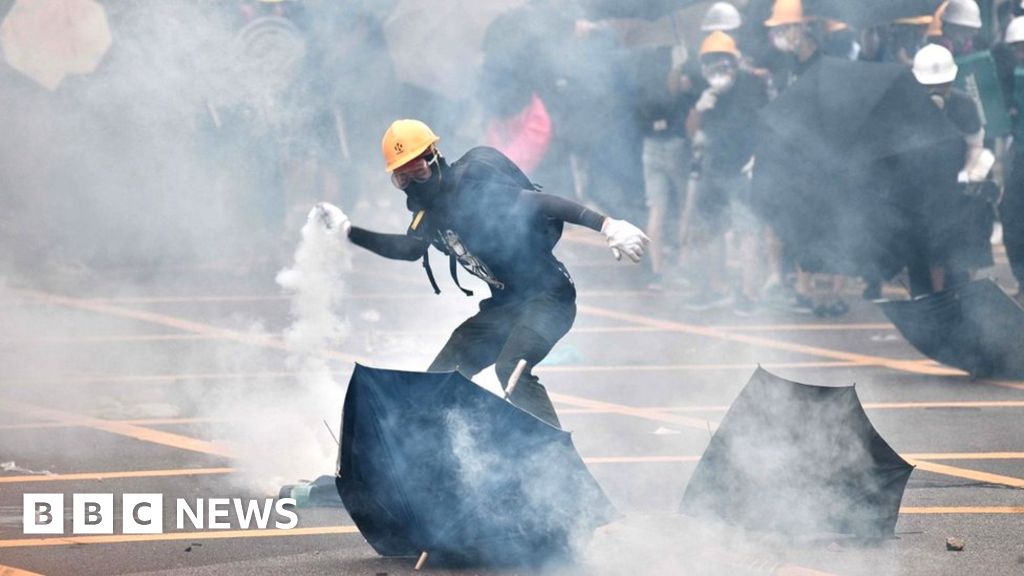 China has passed a controversial security law that gives it new powers over Hong Kong, deepening fears for the city’s freedoms, according to the BBC.

It is intended to criminalize secession, subversion, and collusion with foreign forces, but it will also effectively reduce protests and freedom of expression.

The move follows growing unrest and a growing pro-democracy movement.

Veteran activists have already said they will march on Wednesday, despite the risk of arrest under the new law.

But the pro-democracy organization Demosisto, led by one of Hong Kong’s most prominent activists, Joshua Wong, announced on Facebook on Tuesday that it will cease all operations. Mr. Wong had previously said that he was leaving the group.

China has not yet officially confirmed that the law has been passed, and no draft has been released in advance, meaning residents are still unclear about the steps they will need to take. The law could be implemented as early as Wednesday.

Hong Kong was returned to China from British control in 1997, but under a special agreement that guaranteed certain rights for 50 years.

UK Foreign Secretary Dominic Raab expressed “deep concern” over reports of the passage of the law and said: “This would be a serious step.”

The law has sparked protests in Hong Kong since it was announced by Beijing in May. China says it is necessary to deal with unrest and instability and rejects the criticism as interference in its affairs.

What does the new law do?

The BBC was informed that the law was unanimously approved at a session of the Standing Committee of the National People’s Congress in Beijing.

It is expected to be added to Hong Kong’s statute books later in the day, arriving a day before the 23rd anniversary of Britain’s move to China, a date usually marked by pro-democracy protests.

It would criminalize any act of secession, subversion of the central government, terrorism and collusion with foreign or external forces.

In addition, the city will have to establish its own national security commission to enforce the laws, with an adviser appointed by Beijing.

The Hong Kong chief executive will have the power to appoint judges to hear national security cases, a move that has raised fears about judicial independence.

Importantly, Beijing will have power over how the law should be interpreted. If the law conflicts with any Hong Kong law, the Beijing law takes precedence.

How is it going to change Hong Kong?

For many, the law undermines the freedoms that set Hong Kong apart from the rest of China and help define its character.

People in Hong Kong value civil liberties, such as freedom of expression, the right to protest, and a completely independent and robust judiciary, as allowed in its mini-constitution, the Basic Law, agreed when the sovereignty of the territory was returned to China in 1997.

She has said that Hong Kong’s freedoms, vitality and core values ​​will be preserved.

‘A tool to suppress political unrest’

Like similar laws on the Chinese mainland, it appears that it can be manipulated to meet the needs of the Communist Party, as needed, to crush almost any action deemed threatening.

Unlike other parts of China, Hong Kong has an independent judiciary. For this reason, the Party leadership was not going to leave the interpretation of this law to any old judge.

No. Those who will be able to preside over these matters will be hand-picked by Carrie Lam, the city leader who was effectively installed by Beijing.

So before the new security bill, what actions by activists, no matter how subversive, could not be addressed under existing laws? What were the “extremists” running away with to guarantee this new legislation?

Bomb manufacturing? No. Destroying buildings? No. Meeting with international NGOs to talk about the deterioration of the liberties of the city? Ahhhh maybe. Publicly advocate for Hong Kong independence? Almost sure

The more Beijing has tried, under Xi Jinping’s leadership, to control Hong Kong, the more it has brought residents into the pro-democratic camp.

But he is playing a long game. Sure, promises of surrender were made to the UK, but he wasn’t going to let some western attachment to freedom triumph over loyalty to the homeland. Not under your surveillance. Enter the security law.

He will be joined by Figo Chan, from the Civil Front for Human Rights, who urged people to take to the streets, saying: “We are aware of the risks of being prosecuted. But we insist on taking the initiative, as Hongkongers mean not to fear” .

Announcing that it would “dissolve and stop all meetings,” the Demosisto group said that the fight against “totalitarian oppression” would have to continue in a “more flexible” manner and on “different fronts.”

Joshua Wong said the law marked “the end of Hong Kong that the world knew before.”

The human rights group Amnesty International has described the law as “the greatest threat to human rights in the city’s recent history.”

Taiwan even warned its citizens on Tuesday of the risks of visiting Hong Kong.

But there was widespread international criticism even before the law was passed.

The European Parliament voted to bring China to the International Court of Justice in The Hague in case the law is imposed.

The UK said it would change its immigration rules and offer millions of people in Hong Kong “a route to citizenship” if China followed through with the legislation.

On Tuesday, China said it would respond to the removal with unspecified “countermeasures.”

On Tuesday, Susan Gianforte and Kristen Juras, running for lieutenant governor, attended an event with …