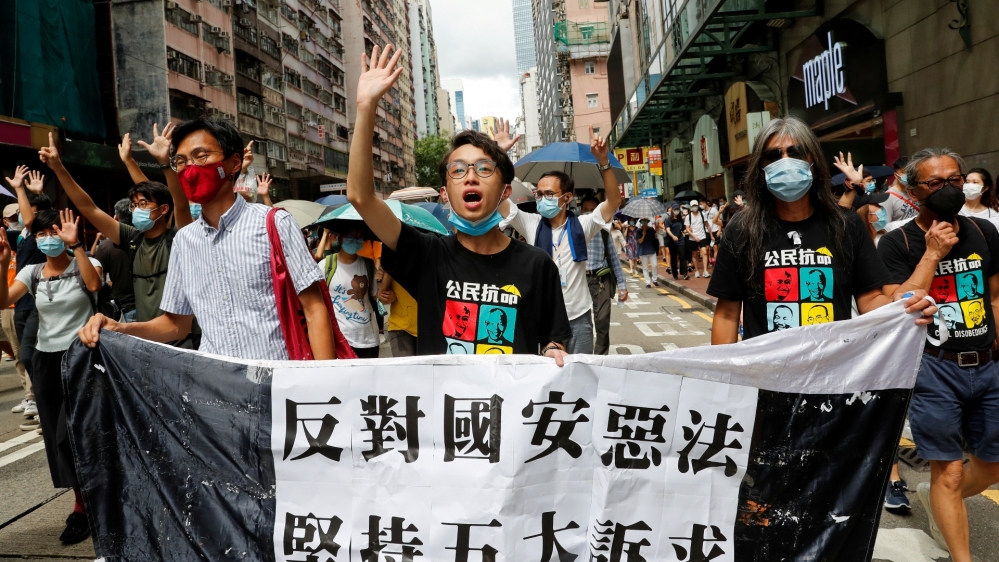 The people of Hong Kong are finding creative ways to express their dissent after Beijing covered the city with a new security law and the police began arresting people who were displaying now prohibited political slogans.

Faced with the sudden threat of prosecution for anything that may promote greater autonomy or independence for the restless city, residents are using puns and even subverting the Chinese Communist Party dogma to express their frustration.

On a bridge in the busy Causeway Bay business district, a key location for pro-democracy protests last year, traffic thunders with freshly painted graffiti declaring, “Get up, you who refuse to be a slave.”

The phrase is taken from the first line of the Chinese national anthem. And while the graffiti could have been written by a patriotic nationalist, it’s most likely a statement of dissent.

Social media and chat forums are full of suggestions on how to find safer ways to protest after Beijing on Tuesday imposed comprehensive legislation prohibiting subversion, secession, “terrorism” and foreign collusion.

In a semi-autonomous city accustomed to speaking its mind, people will find ways to evade the law, said Chan Kin-man, a veteran democracy activist who was previously jailed for his activism.

“In a public space, you could say nothing or use ‘officially approved’ language to protect yourself,” he told the AFP news agency.

“But hidden language is something that laws cannot prohibit.”

The local government said on Thursday that the popular protest slogan “Liberate Hong Kong, the revolution of our time” would now be considered illegal.

For some, the phrase represents genuine aspirations to separate Hong Kong from China, a red line for Beijing, but for many others, it is a more general cry for democracy and an expression of growing frustration with Chinese rule.

But the coded language allows people to keep the catchphrase alive.

A phrase that people have started to adopt online is “retrieve banana,” a similar traditional Chinese character set for Hong Kong and banana.

Others have opted for English slogans that look positive but are a clear dig in Beijing, for example Trump’s phrase “Make Hong Kong Great”.

The first arrest made under the new security law involved a deliberate language challenge.

During the protests a day after the law was enacted, the police announced that they had arrested a man with a flag reading “Hong Kong Independence,” posting a photo.

But eagle-eyed web detectives approached the flag and discovered that a man had written a small “No” before his much larger sentence.

The same phrase has gone viral online since then.

Notes with protest slogans were replaced by empty notes at a ‘yellow’ restaurant, a business that supports the pro-democracy movement, after the implementation of the new national security law in Hong Kong [Tyrone Siu/Reuters]

Blank paper and quotes from Mao

Multiple pro-democracy restaurants and shops across the city have removed their “Lennon Wall” screens expressing support for the pro-democracy movement after police warned some that they could violate national security law.

The walls are often made up of colorful sticky notes with protest slogans.

A cafe replaced its wall with blank notes.

“The essential is invisible to the eyes,” the store wrote on its Facebook, citing the popular children’s book Le Petit Prince.

Another symbol of defiance that has replaced some protest works across the city is the blank white pages.

The gesture represents the inability to speak and also “white terror”, a Chinese phrase used to describe political persecution.

“Suppression catalyzes people to defend themselves,” said Chan, who is also a professor of sociology.

He compared the situation to the way people in Mainland China reveal dissent or anger towards the government with a wink and a wink.

“The people of Hong Kong will definitely respond more actively, it’s just that it could happen in a gray area.”

A slogan that went viral this week was a quote from Chinese leader Mao Zedong. It said: “Those who repress student movements will not come to a good end.”