High-density housing in Salt Lake County did not hurt the value of single-family homes, report says 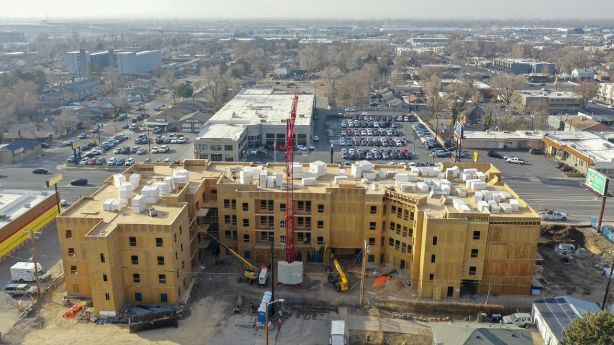 SALT LAKE CITY – An explosion of new, high-density housing throughout Salt Lake County over the past decade did not result in a reduction in property values ​​of single-family homes; in fact, it even resulted in a slight increase in value, according to a report released Monday.

The findings were the result of a study conducted by the University of Utah’s Kem C. Gardner Institute for Policy that sought to find how massive high-density housing projects impacted home values ​​during the 2010s. Higher density was seen as “a politically controversial issue” in city councils due to fears of how it may negatively affect existing home values.

“From our analysis, what we found, in particular, is that apartments have had a positive impact on the value of single-family homes,” said Dejan Eskic, principal investigator for the Gardner Policy Institute and lead author of the study.

Among the report’s key findings is that Salt Lake County homes located within a half mile of new apartment complexes saw an average 10% annual increase in median value compared to 8.6% for older homes. away from projects.

The report also indicated that homes within a half-mile radius of new apartments also had an average value per square foot of 8.8% higher. That’s despite the fact that homes in that category were, on average, 11.1% smaller and seven years older than those more than half a mile away.

“This implies an additional 1.4 percentage points in the annual appreciation of the price of the homes closest to the new apartment buildings,” the report states. “Similar results are seen in most of the county, and the likely driver is that new apartment construction brings new demand and new dollars to a community and rebuilds an older property, bringing more vibrancy and ‘excitement’ to the area. “.

The researchers also found that the only real drop in housing near apartments built earlier in the decade; however, researchers determined that the housing crisis that unfolded at the end of the previous decade was to blame for that.

Eskic explained that the project began by looking at accelerating prices because home values ​​across the county have continued to rise since about 2012. Since housing trends were similar across the county during this time, it enabled the team to research to analyze what caused some rates to perform better. What others.

The team compared the value of single-family homes in Salt Lake County from 2010 to 2019 with data on new apartments built between 2010 and 2018. This allowed to see both short-term and long-term impacts. The data omitted downtown Salt Lake City and a strip of land near the University of Utah; Eskic said this was due to looking more at the suburban parts of the county. It left the team with 9,600 apartments to analyze even by removing those sections.

They also divided the investigation into four quadrants. Of the four, the highest value occurred in “west” Salt Lake County. That includes places like Rose Park, West Valley City, Kearns, Taylorsville, and Magna. The researchers found that values ​​increased 13.7% annually for homes within a half-mile radius of new apartments in those communities compared to 10.5% for homes further away.

The largest discrepancy was reported in the northeast part of the county, which is known as the “Early Suburbs.” That’s an area that includes Sugar House, South Salt Lake, Millcreek, Holladay, and Murray. The newspaper said it was probably because “some of the biggest and most expensive homes are located in the Sugar House and Holladay areas.” Still, homes in the region closest to new apartments saw higher value increases on average.

Eskic explained a section of single-family homes near State Street and I-215 in the area that includes some of the outliers in the data. He said it is unclear why this was the case, although it is possibly due to its proximity to important traffic.

“It’s the only thing that stood out,” he said, “whereas in the rest of the county there weren’t as many single-family homes located near major arteries.”

What the findings mean for future growth

The researchers wrote that their findings almost mirrored previous academic literature on the subject in different parts of the country over the past decades. That is, there is no substantial adverse impact as a result of high-density housing projects.

“Public perception of high-density housing remains a sticking point in growing communities in Utah and the country. While many stereotypes and generalizations about negative impacts are raised in public settings, high-density development actually it does not seem to depress home values, “the researchers wrote.

In analyzing current development, Salt Lake County Mayor Jenny Wilson described most of the county as almost “wall-to-wall” in development, with the exception of the canyons and the county’s western bank, the last of which is the site of the current and future home.

It has left county officials looking for new ways to add homes, as the demand from people looking to move to the county still far outstrips the supply of homes.

“I think we have had to refine our practices and be more evidence-based,” he said, adding that he provides community leaders with stronger evidence on one aspect of high-density housing that they can provide to voters.

“Again, times have changed. With so little land, we have to think about these options,” he continued. “I am happy that the data helps us eliminate something, this may not be a problem.”

Wilson spoke at a virtual roundtable hosted by the Gardner Policy Institute after the report was released Monday afternoon. It was a small event where some of the county’s top leaders and top housing and development experts discussed the report’s findings.

She said the results also show that people want a wider range of home styles than the previous stereotypical house with a white picket fence. That doesn’t mean newer homes like that won’t be built in the future, but even more higher-density projects could be on the way.

Dan Lofgren, CEO of developer Cowboy Partners, agreed with Wilson in that regard. He said the study could also move the needle for further development in the future.

He added that he believes that while it will not completely solve affordable housing problems, “it will accommodate affordability.” Whereas, the lack of housing density could make housing less affordable.

Some experts say the study provides evidence for a concern, but does not address the entire problem completely.

Matt Dahl, assistant city manager for Midvale City, said there are still important conversations that need to happen when it comes to future development. That starts with the other impacts residents near the new apartments could see.

“Our challenges are that it is difficult for residents to feel that the value of their home is appreciating 1.4 (percentage points) faster than people living in a different neighborhood, but they feel it when there is more traffic or parking on the road, even if that parking and traffic are well below the capacity of the affected street, “he said.” The experience of change in these neighborhoods is important and should be taken into account as we seek to develop our policy. “

That is why he said that it is important that cities and developers are able to show residents the benefits of new development early on.

Meanwhile, some see the study as a game changer for future housing development, especially since the state’s population is expected to double in the coming decades. Michael Gallegos, Salt Lake County Director of Housing and Community Development, said the study potentially helps end a discussion about higher-density housing; that could clear a roadblock in a monumental housing task.

“With the cost of housing, the shortage of 35,000 units across the state, that’s a lot we have to answer to,” Gallegos said. “It’s going to take some time, so I think (the study) takes the argument off the table and we can start moving forward.”