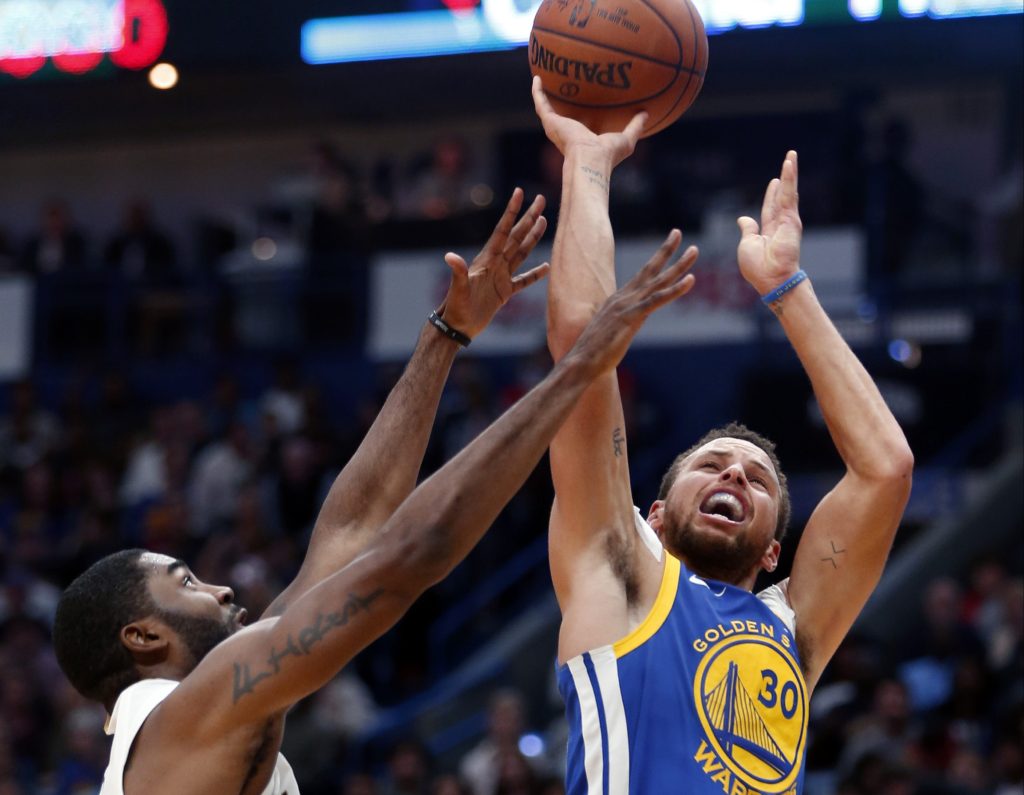 The Warriors won, but you will not remember that in a few days.

That's a shame – it was a downright incredible win. Golden State came back from a 20-point halftime deficit with another incredible third-quarter outburst, where they outscored New Orleans by 17 to pull back into the contest heading into the fourth. In all, the Warriors outscored the Pelicans 76-46 in the second half, behind 31 points from Stephen Curry, a tremendous performance from Draymond Green (19 points, 9 rebounds, 7 badists, 4 steals, 2 blocks), and another great game from Klay Thompson (22 points, 80 percent shooting from behind the arc), who seems to be racking those up as of late.

In the fourth quarter, Durant even got ejected for arguing with Boogie Cousins ​​- more on Cousins ​​later ( I have something I need to get off my chest.

It was an enthralling contest

And then Stephen Curry got injured in the final minute.

Who cares if the Warriors won 125-115 to go 3 -0 on their road trip? The two-time MVP injured his ankle again – how could we talk about anything else?

So here's what we know about Curry's injury and what it means for the Warriors.

(And two other thoughts – sorry, I can 't help myself.'

We know nothing, and that's the worst feeling of the world

When someone here learns something about Stephen Curry's ankle, trust us, you'll know all about it. Until then, it's understandable if you want to hold a candlelit vigil for Curry's surgically repaired right ankle.

The last, Curry left the Warriors' locker room on crutches and the Warriors are not freaking out just yet. Their stance: read too far into the crutches at your own peril

Steph Curry just came out of the locker room on crutches pic.twitter.com/yEbAfE46dU

"I've been on crutches before with an ankle sprain, so I'm just going to keep thinking positive and see what happens," Draymond Green said after the game.

X-rays on the ankle were negative.

While the ankle has held up over the past few seasons, I have logged over 20 incidents involving Steph Curry's right ankle since his rookie season, including multiple surgeries. Hopefully the sprain is mild.

Curry said that this ankle injury will not be one where he can just "bounce back tomorrow morning". But noted that he "should be able to bounce back."

The hope, of course, is that it's just a rolled ankle and that there's no significant structural damage outside of a sprain (which, just to remind you, is a tear). But we do not know, and that's a reminder to Warriors fans that ignorance is the worst feeling in the world.

Now, Curry twisted his ankle with less than a minute to play in the fourth quarter of a game that was, effectively, decided That fact will have people crying "he should not have been in the game!" That, of course, is easy to say after the fact. I do not know if Curry should not have been in the game – what I can say is that it was not outrageous, by any stretch, for Curry to still be in that contest, and therefore I believe trying to pin this injury on Steve Kerr, instead of bad luck, is a downright bad look.

"It was a dumb play, because I tried to go for a steal and it was a bang-bang … Obviously, it hurt." [19659012] Steph leaves on a boot and crutches. Said he's happy Xrays were negative and he's day-to-day. Knows how to handle this situation mentally. pic.twitter.com/MGOWdHjusB

Still, there are people out there who seem to enjoy bad looks, so expect to That's the kind of nonsense to float around until we know the full extent of the injury.

One stat that will not make this easier, but I would be remiss not to mention: going into Monday's game, the Warriors had a net rating of plus-1 – technically it's plus-0.3 – in 445 minutes without Curry this season

The Warriors are complaining too much

Over the Thanksgiving holiday, I watched the Pelicans – Warriors game at Oracle Arena with my dad, which really meant that I was getting a live "What We Learned" column for two hours (listeners of my podcast can empathize, I'm sure)

At one point I asked "what's the deal with Cousins?"

Instead of the typical 20-minute sentence about how Cousins ​​is preternaturally talented but misunderstood and snakebitten, I blurted out something a bit pithier and easier to diges t: "He's a loser."

I remember being taken aback by my own badysis. (Now I know how you feel, all the time …)

Saying that – viewing Cousins ​​though a simple lens instead of having to totort logic as to the critical of the big man (when did we all decide he was a sacred player?) – was liberating.

I've thought about it more since then: To put it bluntly, if I was running a team, I would not sign him. I know he can do things that so few players in the history of the NBA can do, but he's toxic.

If nine years in the NBA without being on a winner did not convince you that Cousins ​​is a loser, Monday's game (in which Cousins ​​was a minus-32) should be re-watched. It was a perfect case study.

Much like the Warriors, Cousins ​​is a prodigious complainer. He's always whining to the refs – I'd say it's the game within the game, but it seems more important than the current game to Cousins ​​at times.

This is not to say that great players can not be complainers – far from it – just look at Draymond Green. But it's the energy that Cousins ​​is constantly projecting that makes him to loser.

When Green does not get his way, I've grits his teeth and demands more of himself and his teammates. He keeps yapping, but it pushes his game to a new level – there are a lot of great players that share that characteristic.

For Cousins, yapping does the opposite – he mopes around the court when he does not get his way and he can even get lazy and downright petty with his play. He's petulant, for no good reason, and that makes him easy to psychologically take out the game – we've seen the Warriors do it to him time and time again. He has taken himself out of the game often, just by slumping his shoulders and complaining about a perceived injustice – and seemingly everything is a perceived injustice – instead of taking that negative energy on the opposing team.

Cousins ​​is 27. I 'm done pretending like he's going to change after a decade in the league. He's a loser.

I'm not that kind of "sports guy" – I like to get to the true root of problems, not just stick blanket statements on a player and then spout some tautology to "back up my point" – but I'm not going to play amateur psychobadyst on a person I do not have a relationship with so I can explain "the truth behind Boogie"

What I know about Boogie is what I hear about him from people around The NBA and what I've seen from him on the court over the last nine years. The verdict is in. Frankly, it's been in for a while, but I apparently did not want to read it until the last few weeks.