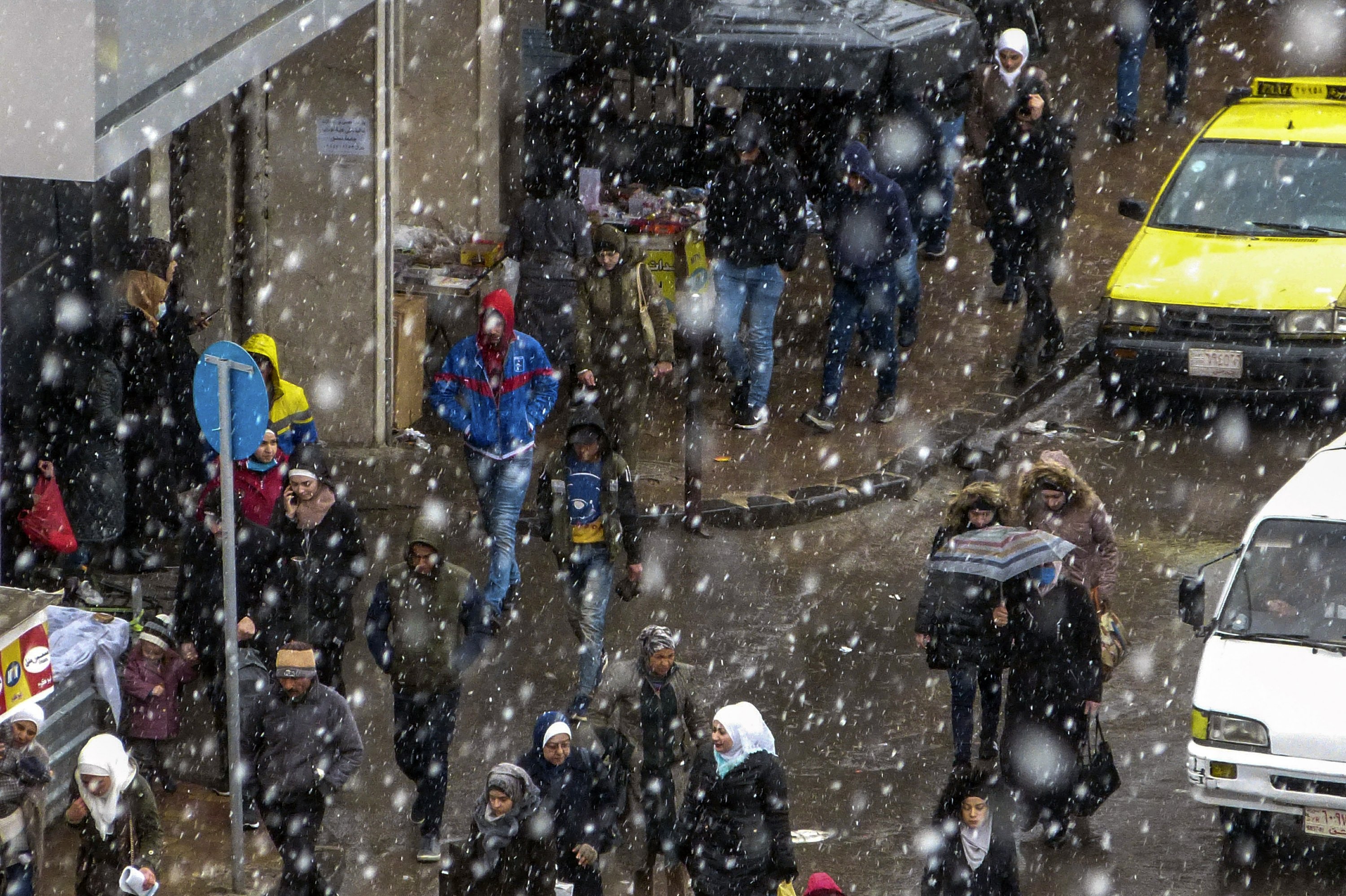 BEIRUT (AP) – Snow covered parts of Syria, Lebanon, Jordan and Israel on Wednesday, covering areas it hadn’t reached in years, disrupting traffic and postponing COVID-19 vaccination drives and even exams at some universities.

It snowed for the first time in years in Marjayoun, in southern Lebanon, and in Bayda, in northeast Libya.

Hurricane force winds cut off electricity in vast parts of Lebanon, forcing many Lebanese, already used to power outages, to depend on generators for longer hours. Rescue teams pulled four motorists out of their snow-covered cars, the National News Agency said.

The first snowfall of this winter in the Syrian capital Damascus did not prevent the Premier League soccer tournament from taking place, as Army Sports Club and Al-Karamah clashed despite snow covering the pitch, reported the Syrian daily Al-Watan.

In the mountains of the Syrian province of Sweida, the snow reached 15 cm (6 inches), according to the official state news agency SANA. Roads were blocked in some provinces. In the central province of Hama, bulldozers removed snow to open roads while vehicles skidded on ice, causing traffic disruptions.

The University of Damascus canceled the midterm exams scheduled for Wednesday and Thursday at all its branches in Syria due to extreme weather conditions. The country’s ports remained open. Subsequently, the local authorities in Sweida, Quneitra, Daraa and Tartous provinces suspended school on Thursday due to the storm and heavy snowfall.

In neighboring Lebanon, Storm Joyce struck Tuesday night with hurricane-force winds that recorded between 85 km / h (52 mph) and 100 km / h (62 mph). The storm is expected to get stronger on Thursday.

Breaking a heat wave, the storm brought heavy rains, a sharp drop in temperatures and the heaviest snowfall in Lebanon this year. The snow is expected to cover areas of altitudes as low as 400 meters, according to the meteorological department. Almost a dozen roads in eastern and northern Lebanon were closed to traffic due to snow. A beachside club and restaurant plunged into the water as 13-foot (4-meter) high waves hit the shore.

The Israel Meteorological Service forecast heavy thunderstorms and cold temperatures across much of the country, with snowfall expected at higher altitudes later Wednesday, including in Jerusalem. On Wednesday night, the Israeli police closed the main road between Tel Aviv and Jerusalem due to snow.

In Jordan, the COVID-19 vaccination campaign was suspended due to severe weather conditions. Schools and universities also postpone classes. Jordanian Prime Minister Bishr al-Khasawneh announced that Thursday will be an official holiday for both the public and private sectors due to the snowstorm.

Osama al-Tarifi, director of the operating room for the Arabia Weather site, said snow has reached 20 cm (8 inches) in the Ajloun Mountains in northern Jordan, where snowfall has not stopped since Tuesday night. Heavy snow is expected in the capital Amman on Wednesday.

In Libya, snow covered the mountains in the country’s northeast as snowfall continued since Tuesday, covering forests and roads in some areas of the North African country.

Residents of the Jabal al-Akhdar area in the far northeast of Libya took their children out for fun, some making snowmen and others starting snowball fights.

“I was actually surprised by how many families came here to take pictures to remember the snow,” said Ali al-Shairi, an amateur photographer from the eastern city of Bayda, known for recurring snow in Libya, but I have not seen none for a couple of years.

In neighboring Egypt, heavy rains and windy weather prevailed on Wednesday and were expected to last through Thursday, the country’s meteorological agency said. Authorities in the South Sinai province, which includes resorts, canceled tourist activities, including safaris and cruises to weather the storm.