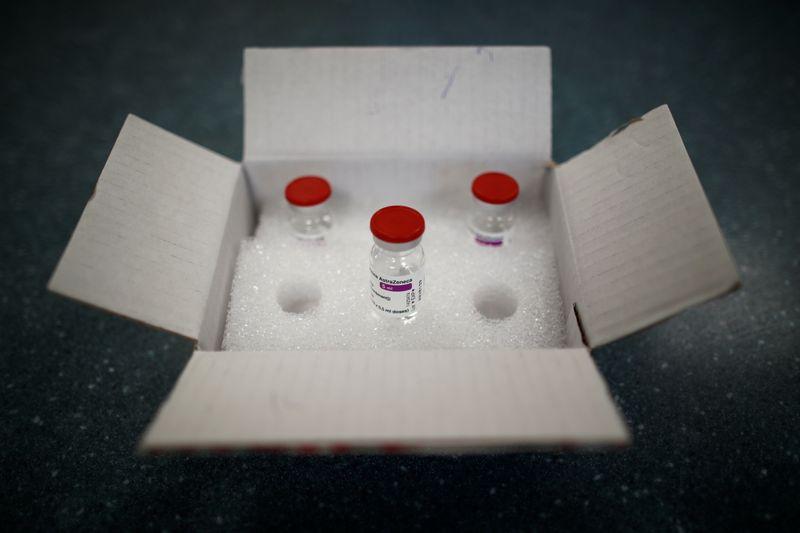 AMSTERDAM (Reuters) – Global health experts came under increasing pressure to clear up questions about the safety of AstraZeneca’s COVID-19 injection, as Sweden and Latvia joined countries suspending its use in a new launch hit. of the vaccine in Europe.

The European Medicines Agency (EMA) said it was investigating reports of 30 cases of unusual blood disorders among the 5 million recipients of the AstraZeneca vaccine. In total, 45 million COVID injections have been administered throughout the region.

The EU regulator will release its findings on Thursday, but its director, Emer Cooke, said she saw no reason to change her recommendation for AstraZeneca, one of the four vaccines it has approved for use.

“The benefits continue to outweigh the risks, but this is a serious concern and needs a serious and detailed scientific evaluation,” Cooke told a news conference.

A committee of experts from the World Health Organization (WHO) was reviewing the cases and was expected to issue a statement later in the day, a spokesman said.

The EU’s largest members, Germany, France and Italy, suspended use of the AstraZeneca vaccine on Monday pending the outcome of investigations into unusual cases of a rare cerebral thrombosis in people who had received it.

The addition of Sweden and Latvia on Tuesday brought to 13 the number of EU countries to act since the first reports emerged of thromboembolism affecting people after receiving the AstraZeneca injection.

The WHO and EMA had previously joined AstraZeneca to say there is no proven link, but some experts said episodes of blood clots, bleeding and low platelet counts in younger people seemed to indicate a causal connection to the injection. by AstraZeneca.

“The benefits of vaccination significantly outweigh the risks, especially for the elderly,” said Karl Lauterbach, health spokesman for the Social Democratic Party of Germany.

“But it could be the case that the risks of the vaccine are higher for certain groups of patients, such as young women,” Lauterbach, an epidemiologist whose party is part of the Berlin coalition, told Deutschlandfunk radio in an interview.

Other epidemiologists note that similar cases have not been found in unusual numbers in Britain, which started using AstraZeneca before and has administered more than 10 million doses.

“A very likely explanation for at least some of the observed bleeding disorders is the result of COVID-19 rather than the vaccine,” said Stephen Evans, professor of pharmacoepidemiology at the London School of Hygiene and Tropical Medicine.

“There are published articles that make it clear that these problems definitely occur in COVID-19 and there is no doubt that all vaccines in use prevent this disease. Therefore, the balance of risks and benefits of the AstraZeneca vaccine clearly remains in favor of its benefits. “

Charts: Launch of vaccines in the EU by brand.

In the largest EU states, including Germany, France, Italy, the Netherlands and Spain, AstraZeneca has accounted for between 13% and 15% of injections administered since launch began almost three months ago, and Pfizer- BioNTech represents the majority, according to official data.

As one of the cheapest to develop, the AstraZeneca injection will become the mainstay of vaccination programs in much of the developing world.

Governments say they acted on the AstraZeneca shot as a precaution: out of 1.6 million people in Germany who received the vaccine, seven became ill with a very rare cerebral vein thrombosis, of which three died.

In a detailed analysis of its findings, Germany’s vaccine watchdog, the Paul Ehrlich Institute, said that six of the cases were in young or middle-aged women, a statistically significantly higher number than normally expected.

Nicola Magrini, director general of Italy’s drug authority AIFA, told La Repubblica newspaper that the AstraZeneca injection was safe and its benefit / risk ratio was “largely positive.” There have been eight deaths and four cases of serious side effects in Italy after vaccines, he added.

A third wave of infection in Europe, fueled by more infectious viral variants, threatens to worsen a pandemic that has claimed 575,000 lives in the European Union and further delay recovery from a pandemic economic recession.

Deutsche Bank on Tuesday slashed its 2021 economic growth forecasts for the euro area by one full percentage point, citing the spillover of activity restrictions linked to the ongoing pandemic.

Coronavirus infections are increasing exponentially in Germany, said an expert at the Robert Koch Institute for Infectious Diseases, putting plans to lift its lockdown at risk. France is considering a possible third national blockade.

Vaccination campaigns had gotten off to a slow start due to supply shortages, but the European Commission said Tuesday that it expects to receive more than 200 million doses of vaccine from Pfizer and BioNTech in the second quarter, putting the EU on way of meeting your goals. .

The EU aims to vaccinate at least 255 million people, or 70% of its adult population, by the end of the summer. The bloc has administered 11 injections so far for every 100 residents, while Israel, the world leader in vaccination, has administered 108 doses, according to Our World in Data.