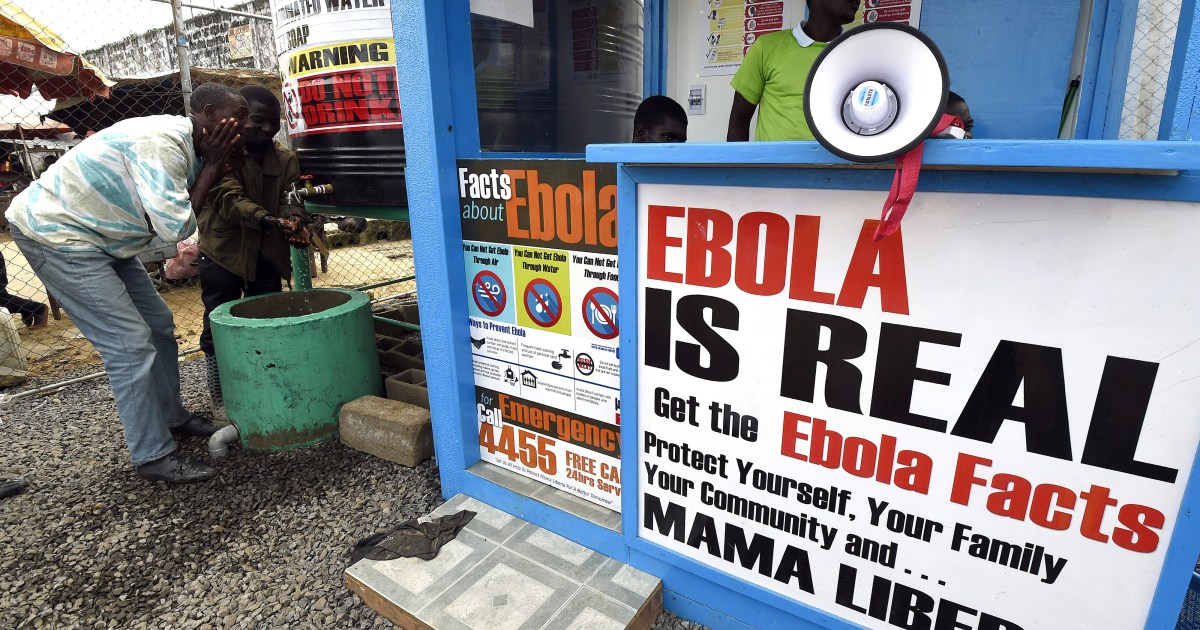 Gouecke, Guinea – Guinean authorities are in a race against time to limit the spread of an Ebola outbreak after several infections of the deadly disease were detected in the far southern region of the country last week.

The West African country declared an Ebola epidemic on February 14, two weeks after patients attended the funeral of a nurse in the town of Gouecke and later showed symptoms of the disease, including fever, diarrhea and vomiting.

Among the confirmed and suspected cases, the nurse, five of her relatives and a traditional healer whom she had consulted, five have died and two are currently being treated in isolation.

Despite the ban on gatherings of more than five people, including weddings and weekly markets, Gouecke residents seemed skeptical of government directives and the resurgence of a disease, which killed some 2,500 Guineans during a previous epidemic that struck West Africa between 2014 and 2016..

“We are not afraid and we are not worried,” said Paul Lamah, who was among residents who defied the ban and attended the weekly Gouecke market on Saturday.

“We know that God is with us. If the authorities want to lie to get money from their partners [aid organisations], they shouldn’t say that. But as far as we’re concerned, Ebola doesn’t exist. “

Echoing his sentiments, Fatoumata Diabate, a red oil seller from N’Zerekore, said that the containment measures announced by the government pose a threat to people already struggling to survive.

“Our husbands finished their studies but couldn’t find a job. We are responsible for our families, that’s why we come to sell our products, to find something to eat, “said Diabate at the market.

“We have to stop getting tired of this story of the Ebola outbreak. Also, we do not believe in this disease. These are just rumors because we have never seen a patient or a person die from this disease. “

In this context, the Guinean authorities, in association with international experts, are trying to establish the full scale of the outbreak.

The efforts include tracking people who have potentially been in contact with Ebola patients to monitor their health and stop the chain of transmission. Security forces have also set up checkpoints to measure temperature and isolate those who appear to be ill.

Neighboring countries are also on high alert to prevent a repeat of the previous outbreak that killed more than 11,300 people in Guinea, Sierra Leone and Liberia.

Sierra Leonean authorities deployed workers to entry points across its border with Guinea to assist border patrols and medical personnel, while Liberia increased its threat level and “increased surveillance and prevention activities.”

An Ebola resurgence could paralyze the already strained health systems of countries in the region at a time when they are also battling the coronavirus pandemic.

Health experts emphasize that getting good and clear information on health education is key at the beginning of an Ebola response, but some residents at Gouecke argued that seemingly confusing messages have influenced people’s reluctance to follow Ebola directives. The authorities.

“Why do they want to stop the market when the kids are still in school, three or four sitting on the same bench all week?” Said Foromo, a Gouecke resident.

A prefectural official who spoke on condition of anonymity told Al Jazeera that authorities considered sending security forces to enforce the ban, but ultimately decided not to.

The source said a major factor in the decision was fear of escalating tensions and possible clashes between security forces and market goers, something that had happened in 2014.

This was corroborated by a gendarmerie commander who said that the security forces received no order to enforce the ban.

“Community involvement is particularly vital,” said Anja Wolz, an Ebola emergency coordinator who oversees the response of Doctors Without Borders, also known as Doctors Without Borders (MSF). “It is necessary to invest time and energy in speaking and listening to the communities in the affected areas. You need to tailor the response based on what they say, and you need them to adapt to the risks of Ebola. It has to be a two-way conversation. “

Listening to and interacting with locals is also key to the success of implementing a successful vaccination campaign to help combat the hemorrhagic fever epidemic, say experts, citing the current existence of Ebola vaccines as one of the main differences with the last outbreak.

The expected arrival in the country of about 11,000 doses of the vaccine developed by Merck was delayed due to bad weather on Sunday, and now vaccines will start on Tuesday instead of Monday.

But even then, authorities fear that the local population will not sign up for the vaccination program.

“People don’t want to believe [in Ebola] and associate the disease with something else. Nobody intends to get vaccinated, ”a prefectural official told local media.

“Citizens do not want to know anything about us and this worries us about vaccination.”

Health Minister Remy Lamah, a native of Gouecke, arrived in his hometown on Saturday to convince people of the merits of taking the vaccine, the source said.

“It all comes back to community engagement,” said MSF’s Wolz. “We have seen this many times in the past. If a community feels involved, listened to and empowered, then the response to Ebola will likely work out well, with or without vaccines. But if a community feels marginalized, unheard, and nervous or suspicious, then a response to Ebola is likely to face multiple difficulties, with or without vaccines.