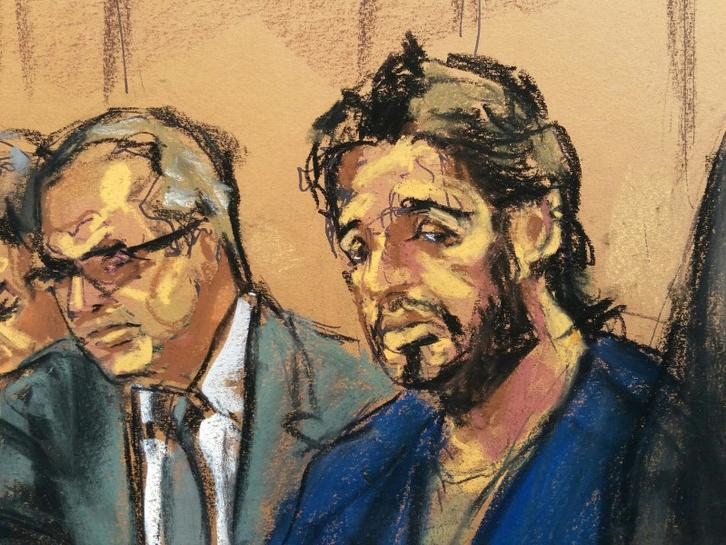 NEW YORK (Reuters) – A Turkish-Iranian gold dealer who testifies for US prosecutors in a criminal trial involving sanctions against Iran said on Thursday he was expelled from a New York federal prison after another inmate threatened kill him for cooperating with authorities.

PHOTO OF THE FILE: Turkish gold merchant Reza Zarrab is shown in this sketch of the courtroom with attorney Marc Agnifilo (L) while appearing in federal court in Manhattan in New York, USA. US, April 24, 2017. REUTERS / Jane Rosenberg

"He said he had been instructed to kill because I was cooperating," shopkeeper Reza Zarrab told jurors in a Manhattan court. He did not identify the person or say when the threat was made. The US Bureau of Prisons UU He did not respond immediately to a request for comments.

Zarrab said that after the meeting, he was transferred from Brooklyn, the Metropolitan Detention Center of New York to the custody of the Federal Bureau of Investigation.

The account came almost to the end of Zarrab's testimony, which began last Wednesday and ended on Thursday afternoon.

Zarrab, a Turkish and Iranian national, pleaded guilty in October to charges that he planned to help Iran evade US sanctions. UU

Zarrab is testifying before US prosecutors against an executive of the Turkish state majority Halkbank, accused of participating in the plan with Zarrab.

The executive, Mehmet Hakan Atilla, has pleaded not guilty and the bank has said that all of its transactions complied with international regulations.

U.S. Prosecutors have charged nine people in the case of conspiring to help Iran evade the sanctions. Only Zarrab, 34, and Atilla, 47, have been arrested by US authorities. UU

Early on Thursday, an Atilla lawyer, Cathy Fleming, sought through an interrogation to undermine Zarrab's credibility. Zarrab conceded under his interrogation that he had lied repeatedly in the course of business, including Atilla.

However, when Fleming asked Zarrab about a letter he signed with former Iranian President Mahmoud Ahmadinejad pledging to help in the "economic jihad", Zarrab denied making such a promise. He said he had not read Farsi and that he had signed the letter without knowing what it meant.

Zarrab also denied having told his uncle in a telephone call from prison "that in this country you must admit something you have not done to free yourself". A summary of that call was included in a court appearance at Atilla's lawyers earlier this week.

The case has strained ties between the United States and Turkey, both members of the NATO military alliance. President Recep Tayyip Erdogan has presented the trial as an attempt to undermine his country and its economy.