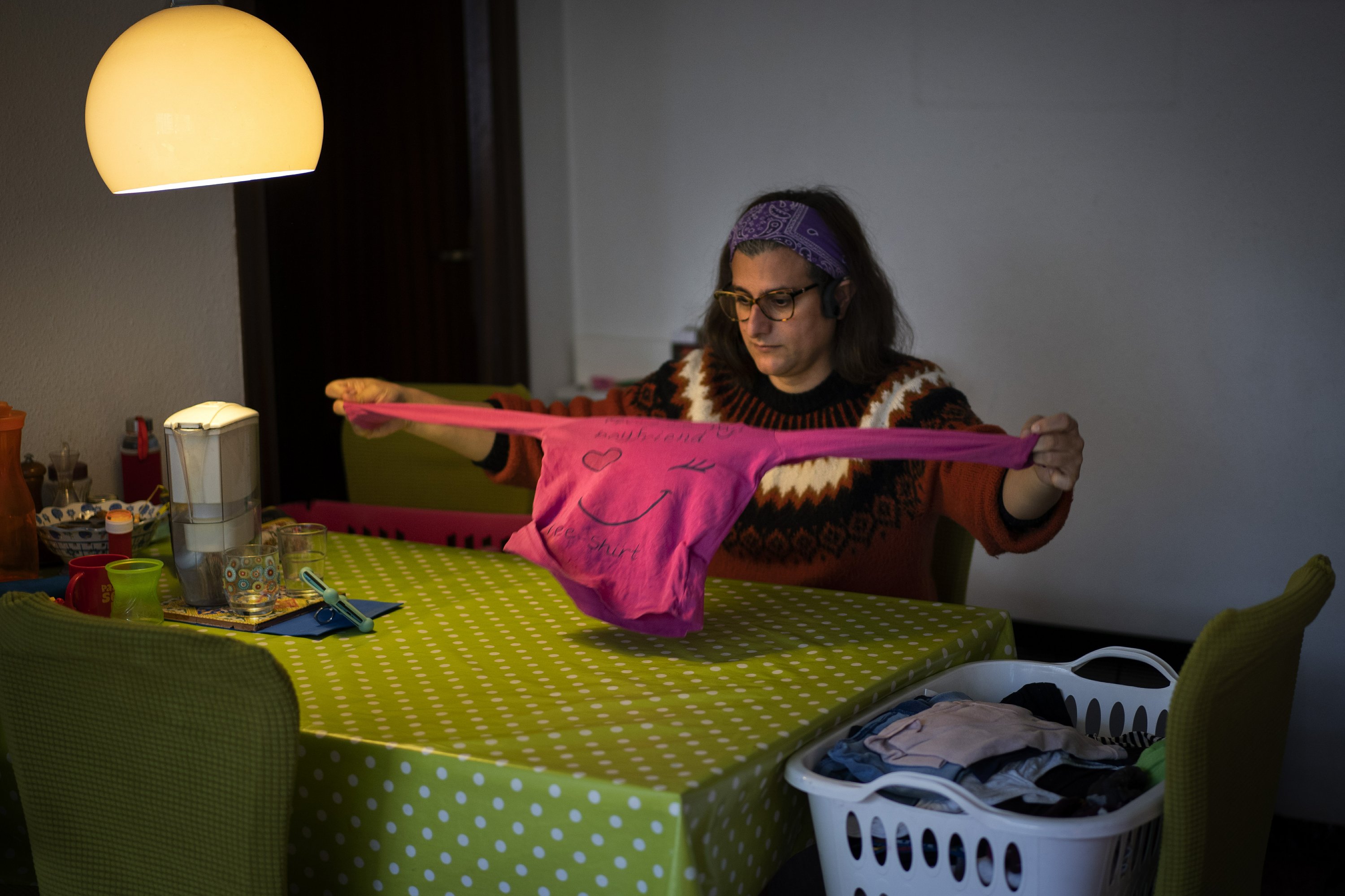 MADRID (AP) – Victòria Martínez continues to sign official documents with the name that she, her partner and her two daughters left four years ago. Barring surprises, she hopes the Spanish government will recognize her as Victòria in May, closing a chapter of family patience for transgender people around the world.

Changing her legal identity in a civil registry in Barcelona will allow Martínez to update her passport and driving license and carry a health card that correctly proves that she is a woman. But the process, which the pandemic prolonged, has been, in his words, “humiliating”, requiring a psychiatric diagnosis, reports from three doctors and the approval of a court.

“Did you want to be stigmatized for being labeled crazy? Did I want to voluntarily request a psychiatric report that says so, for a judge to decide if I can be what I already am? Martinez, 44, remembers wondering, “It has all been emotionally draining.”

A new law proposed by the far-left party in Spain’s coalition government would make it easier for residents to change gender for official purposes. A bill sponsored by the Minister of Equality, Irene Montero, aims to make gender self-determination – without the need for diagnosis, medical treatment or a judge – the norm, with eligibility starting at age 16. Almost 20 countries, eight of them in the European Union, already have similar laws.

Factions of the Catholic Church and the far right have focused their opposition to the bill on the fact that it would also allow children under 16 to circumvent parental objections and seek the help of a judge to access treatment. for gender dysphoria, the medical term for psychology. anguish that results from a conflict between an individual’s identity and the sex assigned at birth.

Less expected has been the fierce resistance of some feminists and the Spanish government led by the socialists.

“I am fundamentally concerned about the idea that if you can choose gender without more than will or desire, that could put at risk the identity criteria of 47 million Spaniards,” said the Vice President of the Government, Carmen Calvo, a veteran socialist and women’s rights. lawyer said last week.

Opponents argue that allowing people to choose their gender would eventually lead to “erasing” women from the public sphere: if more Spaniards registered males at birth then switched to females, they say, it would skew national statistics and create more competition among women for everything from jobs to sports trophies.

The split in Spain reflects a debate between a branch of feminist theorists and LGBTQ rights movements around the world. At one extreme, activists often referred to disparagingly as TERFs (Transsexual Radical Feminists) posit that advancing transgender rights could undermine efforts to eradicate sexism and misogyny by denying the existence of sexes biological.

The State Federation of Lesbian, Gay, Transgender and Bisexual People says that if passed in its current form, the law would help end discrimination against transgender people and lead Spain to the European forefront in protecting LGBTQ rights. .

Nonetheless, Montero’s bill has sparked unusual fury on online platforms, where critics voice alarm over provisions that would assign public toilets and prisons based on “registered gender.” Confluencia Feminista, an alliance of dozens of women’s rights organizations, has also spoken out against any change to the existing law in Spain.

The concern of Alexandra Paniagua, one of the activists of the new platform, revolves around the idea that by eliminating the opinions of doctors and judges, state-subsidized hormones and gender reassignment surgery would be more available, in ultimately “promoting” more dysphoria among young people.

“More people will see easier access to invasive treatment, especially girls who have been told that their bodies are less valuable in our society,” he said.

But the president of the Trans Platform Federation, Mar Cambrollé, argues that some of the fears cited as reasons for maintaining existing obstacles are based on outdated ideas that reduce boys and girls, men and women to a handful of socially prescribed characteristics and roles.

“Transphobic attitudes piss me off,” Cambrollé said. “As a woman, I have been discriminated against for being a woman in a world made by men for men, but also by cis (gender) people who build it thinking of other cis people.”

Finding a compromise early seems like an insurmountable task judging by the virulence of the online debate. Cambrollé has sued Lidia Falcón, 85, founder of the Feminist Party of Spain, for repeatedly saying that transgender and homosexual people promote pedophilia; Prosecutors are investigating Falcón’s statements as a possible hate crime.

Angela Rodríguez, Montero’s advisor on LGBTQ issues, said the timing of the bill has increased tension, and that International Women’s Day is approaching on March 8.

“There is a dispute over the hegemony of the message in the feminist movement,” Rodríguez said during a recent panel discussion.

What for many is a theoretical debate is painfully real for Martínez, who has closed most of his social media accounts. She says the constant talk feels too “personal” and “wicked, generalizing about what a trans person is.”

“Unfortunately, to this day, it’s easier for people to look at you when you walk down the street and they can reconcile a certain type of face with a pair of boobs,” said Martinez, who wears round-rimmed glasses and her hair in a bob to smooth your sharp facial contours.

To declare herself transgender, first with herself and then with her partner, Martínez needed to develop a type of confidence that was not part of growing up as a child in 1980s Spain. There were suicide attempts before she began living as Victòria, and does not consider himself brave.

However, Martinez was hesitant to take hormones and update his vital record. She fought hard to be proud of the woman she is, with a deep voice and a way of carrying herself that stands out. Didn’t you want to break out of traditional gender molds, including expectations that transgender women should embody stereotypical femininity?

In the end, she decided it would be easier to navigate the world with a more socially compliant appearance and an identity card that confirms that she is female, even if that meant bowing to existing legal requirements and the notions of people who still think binary. . terms.