Gas to Gaza? The pipeline that could provide a lifeline 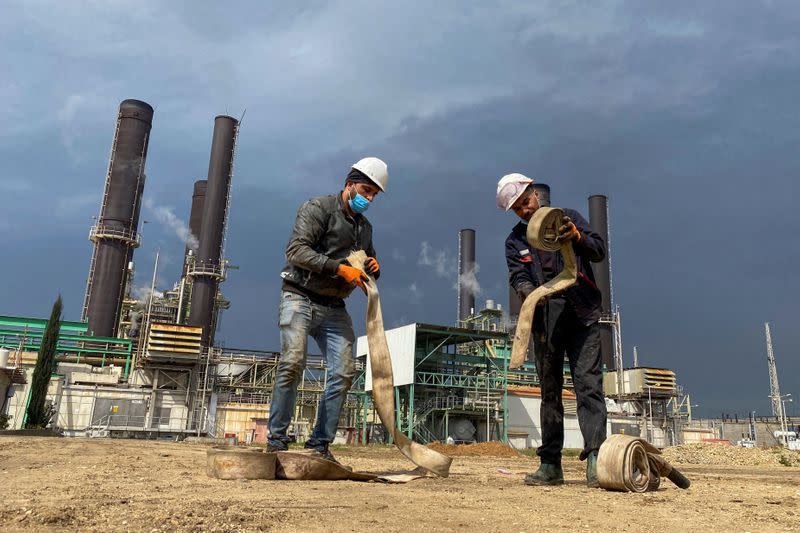 By Ari Rabinovitch and Nidal al-Mughrabi

JERUSALEM (Reuters) – Talks about a gas pipeline that would cross political fault lines and deliver reliable power to the impoverished Gaza Strip have moved from abstract to concrete in recent weeks, three officials with knowledge of the process told Reuters.

For years, the project was a distant prospect due to the Israeli-Palestinian conflict: Peace talks between the two sides were interrupted in 2014 and never resumed, amid mutual suspicions and outbreaks of violence.

But Israeli, Palestinian, Qatari and European interests have converged in recent weeks with the goal of gas flowing into Gaza in 2023, officials say.

The plan would allow natural gas from the Chevron-operated Leviathan deepwater field in the eastern Mediterranean to flow through an existing gas pipeline to Israel, and from there to Gaza via a new proposed extension.

Under the agreement, which has yet to be finalized, the Israeli side of the planned gas pipeline would be funded by Qatar and the stretch in Gaza paid for by the European Union, the officials told Reuters.

If successful, the pipeline project would provide a constant source of energy to the Gaza Strip for the first time in years, ending the ongoing blackouts that have helped cripple the economy of the blockaded Palestinian enclave.

“We are talking about Gaza having 24 hours of electricity, which provides a basis for significant economic growth and a contributor to peace and stability,” said Ariel Ezrahi, energy director for the Quartet Office, a group that promotes peace efforts among the Palestinians. and Israelis reporting to the United States, the United Nations, the European Union and Russia.

“Recent events have been a breakthrough,” said Ezrahi, who chairs the Gas for Gaza working group that has been funded by the Dutch government since 2015.

The Quartet’s office projects that Palestinians initially purchase around 200 million cubic meters (BCM) of gas per year, perhaps increasing to 1 BCM as the plant expands and other consumers join.

Last week, the European Union pledged an initial 5 million euros to finance the Gaza portion of the gas pipeline, which will run about 4 km and cost about 20 million euros.

Qatari envoy to the Gaza Strip, Mohammed Al-Emadi, told Gaza-based news agency SAWA last week that his country would finance the Israeli segment of the gas pipeline, which authorities say will run about 45 kilometers and cost around 70 million euros.

Palestinian and Israeli officials told Reuters that Qatar is willing to pay for the pipeline in Israel. Emadi’s office and the Qatari government press office did not respond to Reuters inquiries.

When asked about the Gaza pipeline, Chevron said it hoped “to support Israel’s strategy to develop its energy resources for the benefit of the country and the region” but did not comment “on matters of a commercial nature.”

Gaza, home to two million Palestinians, is a 360-square-kilometer coastal enclave that sits between Egypt’s Sinai peninsula and Tel Aviv.

It has no access to the outside world except through Israel, which controls 90% of its land and sea borders, and Egypt, which has a narrow land border to the south.

Both countries have maintained a strict lockdown for years, citing security concerns about the militant Islamist group Hamas, which took control of Gaza in 2007.

Currently, Gaza’s only power plant produces electricity for about 12 hours a day using diesel, a more expensive and polluting fuel.

The gas pipeline will allow the plant to double, perhaps quadruple, generation capacity. The Quartet’s office estimates that it will add more than $ 1 billion to Palestinian gross domestic product.

While a cheaper and more reliable source of energy could ease the difficult economic situation of Gazans, thereby contributing to stability in the region, few expect it to be a panacea.

In fact, the power plant at the end of the proposed pipeline has already proven vulnerable to politics.

In 2006 it was bombed by Israel after Hamas militants from Gaza captured an Israeli soldier in a cross-border incursion.

And over the past decade, a bitter dispute between Hamas and its main domestic rival, President Mahmoud Abbas, has seen the two sides accuse each other of aggravating the crisis of power.

Palestine Electric Company (PEC) vice president Walid Salman said he hoped a deal could be reached within weeks, allowing electricity costs to drop 60% and generation to double to a maximum of 140 megawatts.

He said they have been talking to Delek about a 5-year gas deal.

In Israel, Energy Minister Yuval Steinitz said the project was being carried out “in full coordination with us.”

That includes Israel’s state-owned defense establishment and national gas lines, whose chief executive said plans for a 24-inch pipeline that can carry “significant amounts of gas” are in place.

They are awaiting a final agreement, perhaps in the next few weeks, to begin construction.