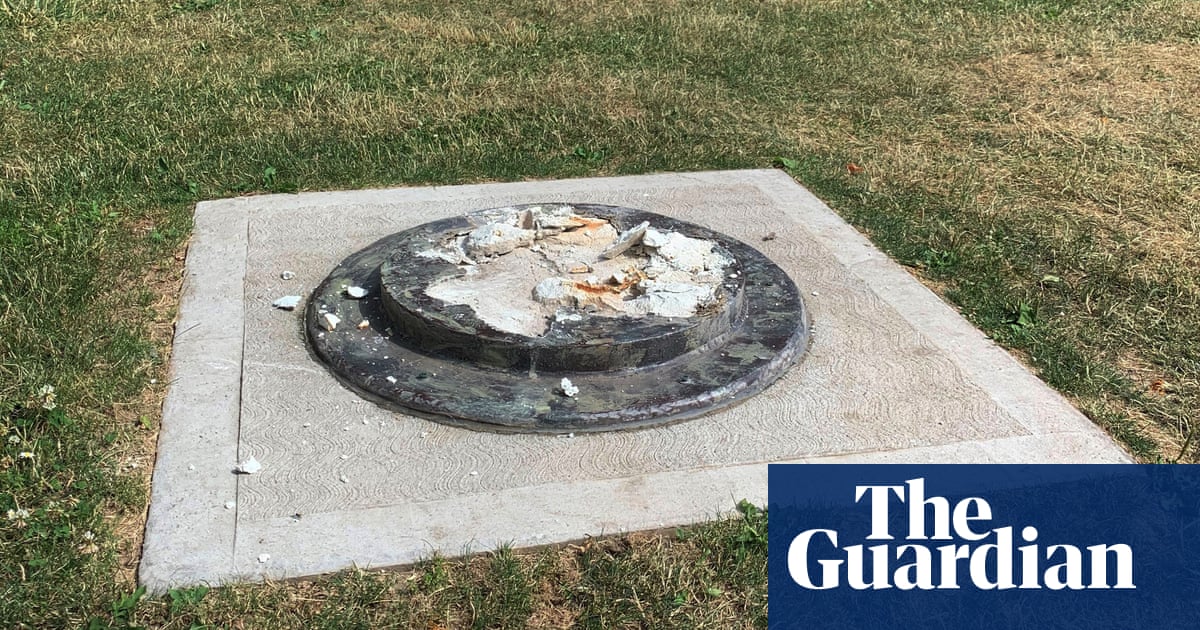 A statue of the great abolitionist Frederick Douglass was ripped from its base in Rochester, New York on Sunday, 168 years after the city was the scene of one of his best speeches, What for the Slave is the Fourth of July?

The statue was located at Maplewood Park, a site on the underground railroad, the network through which Douglass and Harriet Tubman escaped slaves, and others helped transport enslaved people in the southern states to freedom in the north.

One of 13 statues that were placed around Rochester in 2018, the 200th anniversary of Douglass’s birth, the monument was found next to a river gorge, about 50 feet from its pedestal, police said. The base and a finger were damaged.

Carvin Eison, who worked on the project that brought the statues to the city, told the Democrat & Chronicle newspaper: “It is particularly painful that it happened at this time … It is really sad because here in Rochester the statue of Frederick Douglass has always been a face of good. “

The statue would be replaced, he said.

Since the murder of George Floyd, an African-American man, in Minneapolis on May 25 has sparked protests across the country against police brutality and structural racism, statues of Confederate leaders and others with outdated views on race have been object of protests, vandalism and removal.

Donald Trump took the lead in a counter-movement, defending the Confederate heritage and, over the weekend of July 4, calling for the creation of his own sculpture park, or “National Garden of American Heroes,” in defiance to the supposed “extreme left fascism”.

Although the perpetrators of the Rochester removal remain unknown, in a tweet Monday morning, Trump said he showed “these anarchists have no limits!” and linked to a piece on the far right Breitbart News.

Douglass’s views on such monuments have focused on Washington DC, where a statue of Abraham Lincoln and a previously enslaved man has been the subject of calls for its removal.

In an 1876 letter recently discovered by a historian, Douglas writes: “The Negro here, though rising, is still on his knees and naked. What I want to see before I die is a monument that represents the black, not on his knees like a four-legged animal, but upright like a man. “

He also says that the Lincoln statue is “admirable” and adds: “The simple act of breaking the chains of blacks was the act of Abraham Lincoln and is beautifully expressed in this monument.”

Speaking to WROC about the vandalism in Rochester, Eison asked: “Is this some form of retaliation for the national fever on Confederate monuments at this time? Very disappointing, it’s more than disappointing. “

In 2018, two students were arrested for destroying another Douglass statue in the city.

Douglass escaped slavery in Maryland in 1838 and eventually made Rochester his home, although he also lived in Washington. He died in 1895 and is buried at Mount Hope Cemetery in Rochester.

He gave his speech on July 4 and slavery on July 5, 1852, two years after the passage of the Fugitive Slave Act and when the nation slipped into disunity and, in 1861, civil war.

Douglass was a fierce activist who in 1855, in another Rochester speech, said, “I would unite with anyone to do the right thing and with no one to do the wrong thing.”

But his 1852 speech is a powerful reprimand for the white majority in the United States, and then celebrates the 76th anniversary of independence from Britain.

But he goes on to say to his white audience, “The blessings for which you rejoice today are not enjoyed in common. The rich heritage of justice, freedom, prosperity and independence, bequeathed by your parents, is shared by you, not me. The sunlight that brought you life and healing brought me streaks and death.

“This fourth of July is yoursno mine. Your can rejoice me you must cry Dragging a man chained to the great illuminated temple of freedom and asking him to join you in joyous hymns, it was inhuman mockery and sacrilegious irony.

For a slave, Douglass says, the annual celebration of United States independence is “a day that reveals to him, more than every other day of the year, the great injustice and cruelty of which he is the constant victim.”