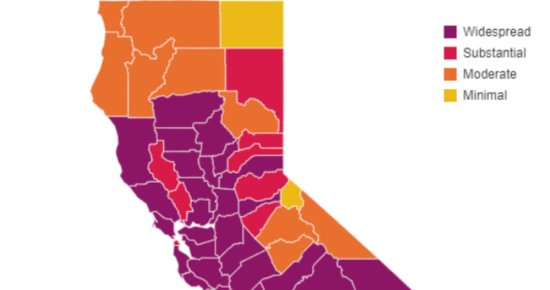 California’s new four-tiered, color-coded system is based on how prevalent COVID-19 is in each county and the community has spread. | Image via Humboldt County Joint Information Center.

Under California’s new four-tiered, color-coded system for managing the COVID-19 pandemic, Humboldt is one of only nine counties to be classified in the orange-green category of moderate spread of coronavirus Indicates. Just two counties – sparsely populated Modoc and Alpine – fall into the yellow tier, with minimal prevalence.

There is a substantial or widespread spread of the virus to the rest of the state, and at a meeting of observers on Tuesday, Humboldt County Health Officer Drs. Teresa Frankovich said that as long as we continue to do relatively well here in Humboldt County, this will not happen. It should take us a lot to push from Orange to Red, triggering more restrictions on local businesses.

“Our case rate is something we really need to look into,” Frankovich said. Taking advantage of eight new cases per day, or 60 per week, could push us into the next level, and we are close to that mark recently. In fact, our rate of new COVID-19 cases between August 17 and August 23 was enough to keep us in the red, Frankovich told observers.

On Friday Gov. The “blueprint for a secure economy”, unveiled by Gavin Newsom, divides each county into four levels based on two criteria: the seven-day COVID-19 case rate and the seven-day trial positivity rate. (Both measures have an interval time of seven days.)

For now, we remain in the middle category – or, as Second District Supervisor Estelle Fennell put it (in a possible tribute to SE Hinton) Foreigner), While the Governor’s map of California is “a sea of ​​purple”, here in Humboldt “we are of gold.” And I would like us to remain gold. ”

Frankovich said the state’s new tier approach to regulations is good news for Humboldt because it allows businesses some degree of local control to expand and conduct contracts, rather than going directly from open to closed. For example, in our current level, restaurants can provide indoor food to 50 percent capacity or 200 people (whichever is less), and if we were to rise to the red “enough” level, restaurants would get 25 percent. Will need to reduce capacity or 100 people.

Fourth District Supervisor Virginia Bass said she is hearing about people’s weddings and other mass ceremonies in violation of state and local health orders.

“This is a very big issue,” Frankovich clarified, adding that social celebrations have proved to be a major driver of local transition. “Recently there was a gathering of about 40 people and we have many cases related to this,” he said. “If I could make a plea on one thing to live in your domestic unit.” And if you collect, make sure it is in groups of no more than four to six. “And safer than outside,” he said.

Observers also discussed the new state’s guidance for youth sports. Frankovich said the county’s Joint Information Center has received 15 applications from groups expected to play some organized youth sports. Ten have been approved and JIC employees are working on the other five.

First District Supervisor Rex Bohn said that under the guidelines, requiring children to be at least six feet away, it looked like the only two sports they could possibly play were tennis and golf. “If you want to be six feet apart, stealing another base is really easy,” he said.

Frankovich agreed but said that youth groups can always do strength training and practice. The guidance says that children should not share equipment, adding, “It would be nice to throw balls.” The county is seeking further guidance from the state regarding employee regulations.

Third District Supervisor Mike Wilson suggested that children use the Calvinball approach more. “The rules of the game are just constructions built over time,” he said. “We don’t even know where they came from. … It’s time to adapt. It’s the creativity that is needed to manage it in our society.”

Personnel from the county’s Emergency Operations Center, including Frankovich and Honsall, are now providing COVID-19 updates every other week, so the next will be at the September 15 meeting.