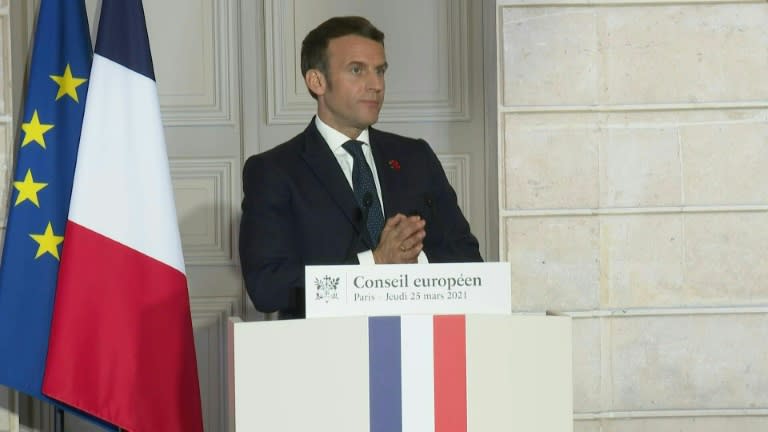 The French government on Friday warned of increased police checks to enforce travel restrictions in place in Paris and several other regions as coronavirus cases continue to rise across the country.

Controls at train stations, airports and highway toll booths “will increase from today,” the prime minister’s office said, calling the situation “critical” with the arrival of a third wave of infections.

The move came after France placed three more departments on a limited lockdown, with around 20 million people, including those in the Paris region, being banned from traveling more than 10 kilometers (six miles) from your home, except for essential reasons.

There is also a nightly curfew across the country starting at 7:00 pm.

Daily cases in France have almost doubled since the beginning of the month, reaching more than 45,000 on Thursday, and the number of people in intensive care now stands at 4,766, not far from the peak during the second wave in November.

In Paris, the pressure on hospitals is even greater, with the cancellation of most non-essential surgeries to free up beds amid the rapid spread of the most contagious British variant, which now causes the majority of infections across the country.

Authorities said on Friday that 304 people had died from Covid in the past 24 hours, bringing the total to 93,709.

French President Emmanuel Macron has been criticized for going against the advice of scientific experts and his health minister in late January, when he decided not to impose a national blockade.

“These next few weeks will be difficult. We will take effective action at the right time and, in my opinion, there are no taboos,” Macron said Thursday night.

“I have no mea culpa to issue, no regrets or a sense of failure,” he added in defense of his decision to keep the country in a semi-open state at the end of January.

– Won’t you slow down the epidemic? –

Schools across the country remain open, although individual classes in high-risk departments will now close if only one student tests positive, rather than the previous three.

“That will necessarily mean more school closings in the coming days,” Education Minister Jean-Michel Blanquer said on Friday, saying that the total closure of schools to curb the virus is a “last resort.”

The number of new coronavirus cases in children under 15 years of age has dramatically accelerated over the past week, the health authority of Sante Publique France said on Friday.

France’s vaccination campaign has also been slow amid chronic dose shortages, with only about 10 percent of the population having received at least one dose.

But on Friday alone, more than 400,000 doses were administered, Health Minister Olivier Veran tweeted, and the government promised to open dozens of mass vaccination “supersites” in April.

Prime Minister Jean Castex has called France’s efforts to avoid a painful nationwide lockdown a “third way” in its fight against Covid, but many medical experts feel the restrictions are not harsh enough.

“I understand the strategy of wanting to take gradual measures, but with the situation we find ourselves in, I’m not sure they are going to stop the epidemic,” said Solen Kerneis, an infectious disease specialist at Bichat hospital in northern Paris. he told AFP.

The main health watchdog recommended offering the jabs to dentists and veterinarians on Friday in a modest expansion of eligibility criteria, with the focus so far on vaccinating those over 75, medical personnel and those with impaired disease. existing health.