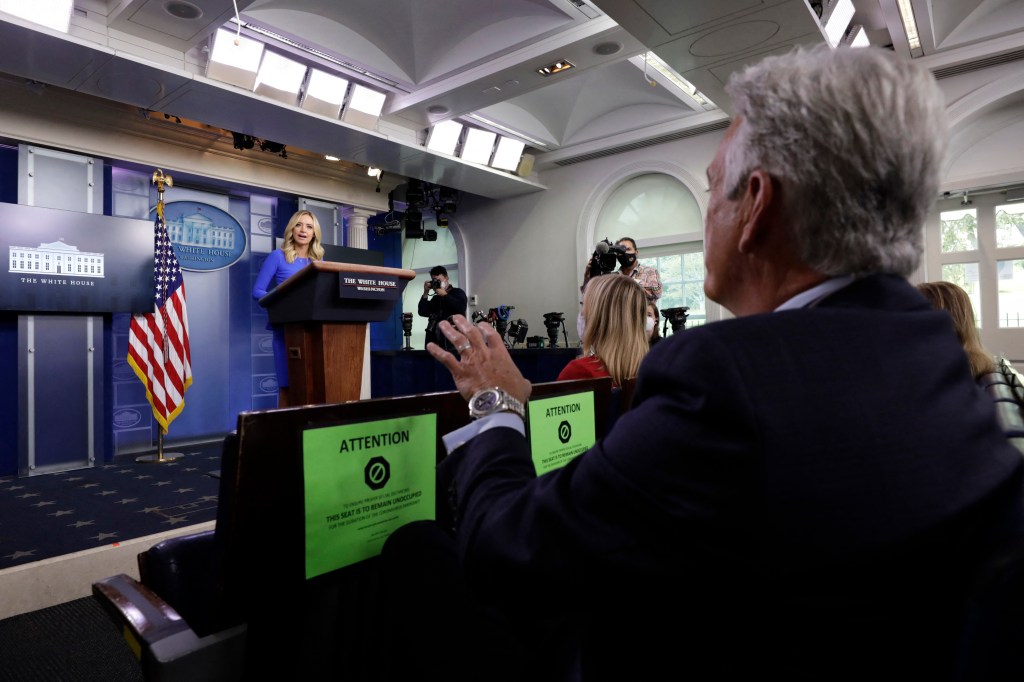 In a live shot of the White House lawn, Roberts said, “To all of you on Twitter who are pushing me to ask that question – I don’t care”. “Because this is a question that clearly needs to be asked, and clearly, the president’s Republican colleagues are a mile away from here, looking for an answer to this as well. So stop deflecting, Stop blaming the media. I’m tired of it. ”

A dull @johnrobertsFox He says he accuses the media of tweeting people on Twitter in a debate about President Trump’s comments (and has since) been asking about white supremacist groups.pic.twitter.com/UW3mBh5Mri

Earlier, at a briefing, Roberts asked McInnney, “I would like to ask you for a definitive and stated statement without being vague or deflected.” As a person speaking for the president, the president condemns white supremacy and groups that embody it in all their forms. ”

McInnie said, “It has been answered. Yesterday by the President himself. The day before, the Speaker asked the Self President on the debate stage. He said ‘sure’ three times. Yesterday, asked him point blank.” Gaya, ‘Do you condemn white supremacy,’ and he said ‘I have always condemned any form of him.’ ‘

She goes through other citations where she said the president has “condemned white supremacy more than any other president in modern history.”

But Roberts pressured him to make a declarative statement that the president condemned white supremacy. “I just did,” he insisted, though he never made such a statement.

He then accused Roberts of “opposing a plot and a narrative”.

Roberts continued to pressure Trump to make a declarative statement, instead of reading Trump’s previous citations.

In a debate on Tuesday, moderator Chris Wallace asked Trump if he would refute white supremacists. When Trump asked for a specific group, Joe Biden referred to the Proud Boys, the group with the most perfect hatred. Trump told him to “step back and stand,” but later claimed that he did not know who they were.

Later, Roberts stated on Fox News that it was “all very surprising” why the White House wouldn’t just make a declarative statement. “If the president didn’t know who Proud Boy was and he just threw names, if he didn’t know who they were, why did he malign them. Why didn’t he say, ‘I don’t know who they are. What? You can give me a little more information about them. ”

The topic was also raised by Paula Reid of CBS News, asking for statements from the FBI and the Department of Homeland Security that racially violent extremism-induced “is one of the most dangerous threats in America”

“The White House agrees with that assessment, and what is it doing to counter this threat?” Reid asked.

McInnie said that Trump has said he wants to prosecute the KRK as terrorists, and should be more of a national hate crime than lynching. “There is no strong indication that you can advocate prosecuting a white supremacist.”

Reid, however, stated that Trump’s record was mixed, noting that he had equaled or said that he “did not want to accept it or address it.”

The press secretary said, “She kept pressing the mechanic until you needed to finish me off.” It is quite funny that the media gets nervous about interrupting during the debate and then adopting the same strategy themselves. This is the White House briefing. You ask a question and you give me time to answer it. ”