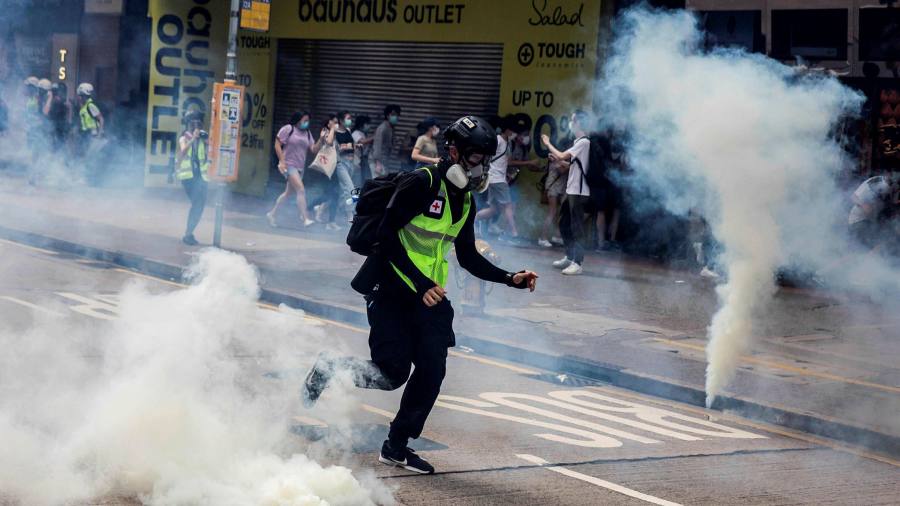 Shares in Hong Kong fell a day after widespread demonstrations returned to the streets, as investors scrambled to figure out the implications of China’s move to impose a national security law on the city.

The Asian financial hub”s benchmark Hang Seng index dropped as much as 1.8 per cent on Monday morning after police fired tear gas and arrested about 180 people among the thousands who marched on Sunday to protest against the new law.

The index recovered some of those losses later in the day to trade 0.2 per cent lower, but will investors cool on Hong Kong as China takes closer control?

The US has slammed China’s plan for Hong Kong as a ‘death knell’ for autonomy, while Chris Patten, its last British governor, says the G7 must stand up for the territory’s freedom. China’s move to rein in Hong Kong is just the start, says a New York Times analysis. (FT, NYT)

Citi investment bank boss predicts resurgence of offices The benefits to banks of having their staff work from home will “erode over time”, Paco Ybarra warned as he made the case for offices hollowed out by the coronavirus pandemic. (FT)

Companies ditch commercial paper to lock in longer-term debt Commercial paper you’ve lost sti fizz. Dozens of blue-chip companies including Coca-Cola and PepsiCo, which have long relied on the market to raise cash, are paying off tens of billions of dollars of borrowing in favour of new longer-term facilities. (FT)

Richard Grenell to step down as US ambassador to Germany The move follows a contentious tenure in which relations soured between the Trump administration and Berlin over everything from Iran and trade to climate change and defence. (FT)

US retailers lay bare cost of being deemed ‘non-essential’ Sales have surged at those allowed to stay open in the coronavirus pandemic but collapsed at department stores, clothing chains and other outlets forced to fall back on their online operations. (FT)

Australia unleashes ‘Neighbours’ to counter China influence
Australia will beam Neighbours, MasterChef and other popular television shows into seven Pacific island nations in a soft power push is designed to counteract Chinese influence in a region Canberra considers its own backyard. (FT)

Virus obstructs helicopter deal Sweeping global travel restrictions have hindered the awarding of an $800m South Korea marine helicopter contract being fought over by UK and US manufacturers. (FT)

EU divisions laid bare over recovery Bank deposits are surging across Europe as people respond to the coronavirus pandemic by saving more, fuelling fears among economists that consumers will not come to the rescue of the continent’s shrinking economy. (FT)

Netanyahu in court Benjamin Netanyahu, Israel’s longest serving prime minister, arrived in court on Sunday for the start of his corruption trial, setting the stage for a long battle between the rightwing populist and the country’s besieged legal system. (FT)

VW ruling A German court is set to deliver a landmark ruling on Monday in a case where a Volkswagen minivan owner is seeking damages because VW sold vehicles with manipulated diesel engines. (FT)

SpaceX prepare for first astronaut launch Elon Musk’s SpaceX will carry two astronauts into orbit on Wednesday in the first such launch for a private company. If successful, it will remove Nasa’s reliance on Russia to transport crew to the International Space Station following retirement of the space shuttle almost a decade ago. (WSJ)

What else we’re reading

Just one in 10 fund managers expect V-shaped recovery V, U, W, L — just a handful of the letter-shaped recoveries that investors have put forward as possible paths for the US economy, once the worst of the coronavirus crisis is over. Fed chiefs are going out in masks to gauge public fear as part of their jobs, writes Rana Foroohar in Swamp Notes. (FT)

Vietnam”s Patient 91 Among Vietnam’s modest number of coronavirus cases, one is commanding utmost attention from media, doctors and the public: a 43-year-old British pilot known as Patient 91. More than two months after his Covid-19 diagnosis, the unnamed man is on life support and Vietnamese doctors are taking extraordinary measures to keep him alive. (FT)

‘Never waste a crisis’: inside Saudi Arabia’s shopping spree The $325bn Public Investment Fund have spent billions on overseas deals this year even as the kingdom’s economy struggles. (FT)

Losing it in lockdown From MPs swearing at a dropped connection in a Zoom meeting to the health secretary, losing his temper on the radio, the coronavirus crisis is testing those who usually deliver half-schooled performances. Pilita Clark says the pandemic is both a recipe for anger and a reason to keep one’s temper in check. (FT)

Can a former Disney executive Kevin Mayer transform TikTok? Homer Simpson, Darth Vader and Captain America have a shared back-story: they were all brought to Disney by Kevin Mayer. Now the square-jawed, all-American media executive is preparing for his own epic adventure. (FT)

Joseph Andrés”s Lunch with the FT The Washington DC-based chef and philanthropist’ve delivered millions of lockdown meals to essential workers, homeless shelters and elderly people, and is pushing for the US government to expand aid to Covid-19 victims. But, I tells Edward Luce, the crisis can be a force for good. (FT)

Biden”s China stance A recent campaign advert by Joe Biden”s presidential campaign criticised Donald Trump for treating China too softly over the Covid-19 outbreak. The comments have unnerved progressives who fear that, if elected, Mr Biden will take a tough stance on Beijing. (The Atlantic)

Aviation industry to prepare for sweeping changes Our flying experience will be radically different as the industry warns of rising prices and long queues. (FT)

Pandemic morale After weeks of confinement at home, people’s resilience is being further tested by not knowing whether they will be permitted to return to their old lives. Camilla Cavendish is now more disoriented than when the restrictions were introduced. (FT)

Video of the day

DC Lockdown Diary The FT’s Kiran Stacey examinations, the prospect of another round of lockdown drills after the director of the Centers for Disease Control and Prevention (CDC) warned that a second wave of coronavirus infections could hit the US this autumn.