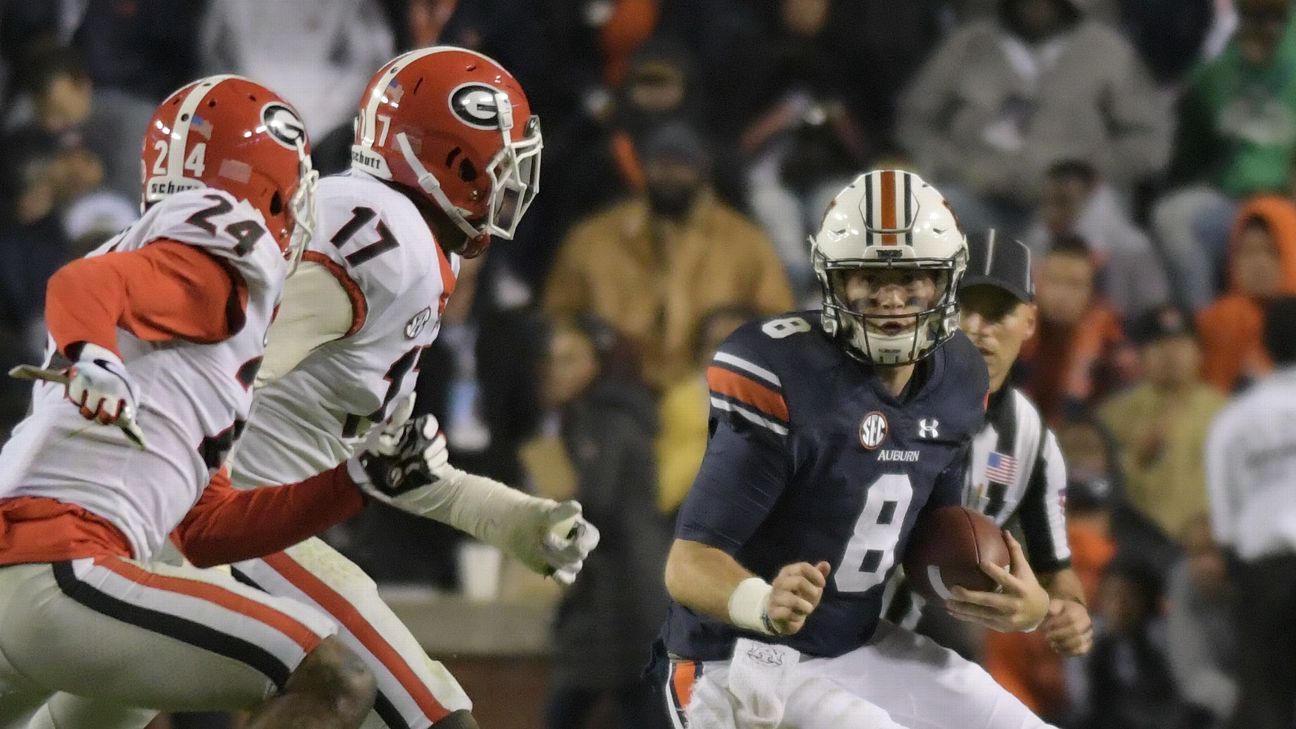 The last time Auburn and Georgia met, it was not even close, as the Tigers defeated the then-No. 1 rated Bulldogs for more than three touchdowns.

But this game will not be at Jordan-Hare Stadium. It will be in Atlanta, in a neutral field, with three weeks to study each clip and learn from the previous confrontation.

Will it have a different result? We'll see.

To prepare for the SEC Championship Game on Saturday afternoon, here's a look at some important players and confrontations to watch:

Auburn: If Kerryon Johnson's shoulder does not allow him to play on Saturday, the Tigers are in trouble. It is too important for what they do offensively, not only by accumulating yards on the ground, but by releasing individual coverage in the pbading game. The junior has been an absolute scoring machine with 19 total touchdowns in addition to his 1,276 yards on the ground.

Georgia: The Bulldogs can not get another underperformance in Nick Chubb's season and hope to win this rematch. His 27 rushing yards against Auburn three weeks ago was the worst total in a single game since October last season, and he condemned the offense from the start. Field quarterback Jake Fromm has been spectacular for a true freshman, but you can not expect him to carry the team without the help of Chubb and the running game.

Players under the radar to watch [19659002] Auburn: Jeff Holland is a well-known in the SEC – he is the second in the conference in catches with nine – but he is not yet on the national radar. That could change with another solid performance against Georgia. The outside linebacker has shown a nose for football this season with four forced fumbles, in addition to the numbers on his jacket. He has the potential to make Chubb and Fromm's day miserable.

Georgia: Do not look now, but Javon Wims could become Fromm's favorite target. The 6-foot-4 senior catcher has 11 receptions in his last two games, which is more than he had in the first four games of the season. With Auburn probably filling the line of scrimmage, Fromm will need Wims to make plays in the pbading game.

Auburn: Pay attention to what happens in the first down for the Auburn offense. It is the key to everything. Gus Malzahn's offense has been on a roll lately, but the only sure way to stop it is not to allow positive yards on the first try. If you can not and are allowed to have third and short situations where you can not predict running or pbading, you are fine.

Georgia: Something strange happened the last time these teams met: Fromm set himself on fire, completing three consecutive pbades when the Bulldogs marched down the field for the first touchdown of the game, and then walked away of him almost completely. Fromm did not attempt a pbad on the first or second attempt in three of his next four units, and at that time Auburn was in control. So do not be surprised if that changes and Georgia tries to pitch to open the running game, not the other way around.

Where they are vulnerable

Auburn: Beating two No. 1 teams in a three-week stretch was impressive, but it came at a cost. Suddenly, injuries are a concern for the Tigers. Johnson seemed to be suffering a lot as he left the field late against Alabama, and his shoulder will be worth watching during pre-match warm-ups. The same could be said for his backup, since Kam Martin rang his bell in the fourth quarter of the Iron Bowl. With the leading rider of last season, Kamryn Pettway still marginalized, Auburn is in a tenuous position as a runner.

After surviving the growing pains and adversities of the great quarterbacks, Jarrett Stidham has arrived, at the best possible moment. History

Georgia: For the first eight games of the season, Georgia's offensive line was a strength. And it was a pleasant surprise, too, considering how badly the unit played a year ago. But then Auburn pbaded and the group stepped back in time, giving up too much pressure. Holland & Co. practically lived in the backfield of Georgia three weeks ago. For the Bulldogs to have the chance to take revenge on the Tigers, that can not happen again.

Let's forget the players for a moment here. The real match will be coaches in this game. Malzahn has been on fire lately, leading an aggressive and offensive offense that was far from what we saw earlier this season against Clemson and LSU. With so much at stake, it will be interesting to see if he keeps his foot on the accelerator. And then there's Kirby Smart, who went in the opposite direction. The aggressive coach who said he wanted his team to be the hunter and not the hunted suddenly played to not lose against Auburn three weeks ago, and it cost him. The best hope for Georgia is if Smart rediscovers that hard, prison-free approach that feels so good to him earlier this season.

Maybe Alabama can survive without winning the SEC title and still make the University Football Qualifiers. We'll have to see what happens with Wisconsin and Oklahoma. But one thing is certain: neither Auburn nor Georgia can say the same thing. Losing, and you're out of the playoff hunt. Win, and that's it. It's that easy.