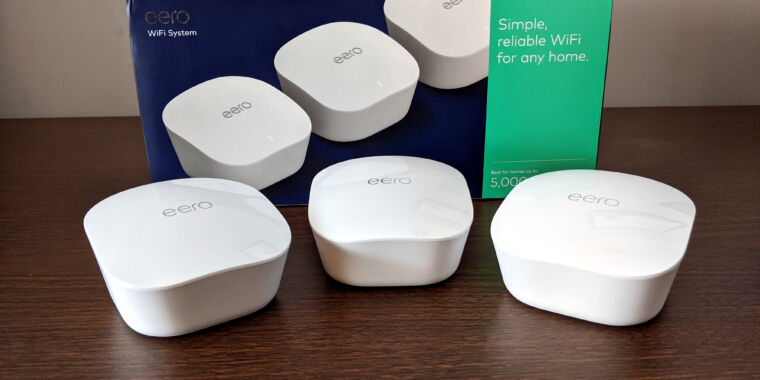 Tech blog Zatz Not Funny broke the news this weekend that the Wi-Fi 6-capable Eero hardware is on the FCC for testing and verification. Details on the new hardware are sketches for the moment – Ero has requested confidentiality for most interesting data through March 10, 2021.

We know that three devices are listed under test – an Ero Pro, Ero Gateway and Eero Extender. All three are Wi-Fi 6 (802.11ax) -featured parts. The Eero Pro is a tri-band design (one 2.4GHz radio and two 5GHz radios), similar to the current Eero Pro; The Gateway and Extender are dual-band designs differentiated by a wired Ethernet port – the Gateway has two, and the Extender has none.

Ars has reached Eero, with no response as of press time. We all know for sure what limited nonconfidential data is available from RF testing at the FCC-RF’s site – Arrow’s site itself still says, “802.11ax (also known as Wi-Fi 6) Known) There is no deadline set for support. ”

Although very little part of the FCC filing is publicly available, the Pro has a photo for device-label placement and a diagram for the Gateway and Extender showing us the underside of the devices. In all likelihood, the Pro will strongly resemble one of the current generation Pro or Amazon Ero devices; The dual-band gateway and extender models share a single diagram, which looks smaller and more skewed than the Pro.

Although the underscription diagram for Gateway and Extender is somewhat shaped like a second-generation beacon design, the plug-ins shown to us do not appear – so it does not seem likely that they will be wall-wart designs like the beacons or Like the Eero competitor Plum. We expect the new generation of devices with external power supplies will likely be of desktop-style design.

It is unclear whether the new generation of Eero tools will continue to support Thread – both Thread and ZigBee are extensions of the underlying 802.15.4 wireless protocol. FCC filings specifically mention the name ZigBee, but since both protocols operate on the same spectrum, they will not require separate filing.

Likewise, we don’t have solid information about the interoperability of new Wi-Fi 6-capable Eero devices with two older, Wi-Fi 5 generations – but based on the history of Ero, we doubt the company won. Has not done T support mix and match as desired.

If we get additional information from contacts on Eero then we will update here.