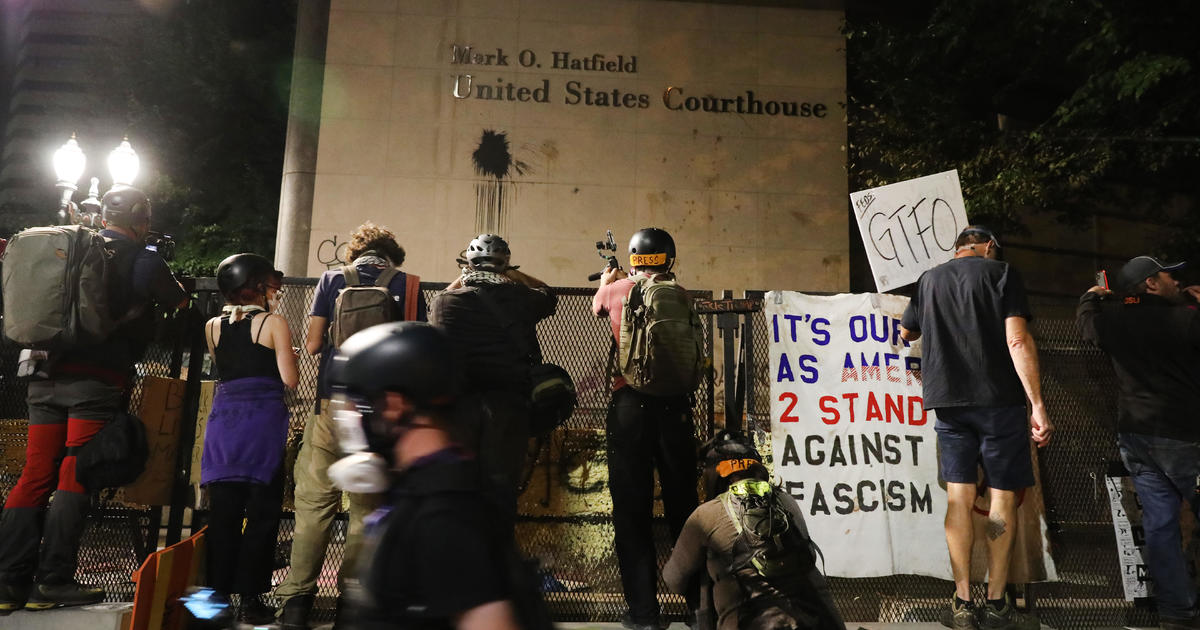 Washington The governor said Wednesday that the Trump administration and Oregon governors have agreed to withdraw federal agents from Downland Portland following violent clashes between law and order and protesters. But the White House and the Department of Homeland Security said federal law enforcement would leave the city after the federal law came into force – which officials were sent to protect – has closed.

Oregon Governor Kate Brown, a Democrat, calls for removal Federal law enforcement This comes after discussions with Vice President Mike Pence and other officials of the Trump administration from the Department of Homeland Security.

“Following my repeated requests, the federal government has agreed in recent weeks to stage a phased withdrawal of federal officers stationed at the Mark Hatfield United States Courthouse,” she said in a statement. “These federal officials have acted as an occupying force, denied accountability and brought violence and conflict to our community.”

Customs and border security and immigration and customs enforcement officials will begin leaving downtown Portland on Thursday, she said. They will also clean the courtyard and remove graffiti.

“The Oregon State Police’s local Oregon officers will provide free speech and security of the exterior of the courtyard with the federal speech service,” Brown said. “A limited detachment of federal officials, which serves as the building of the security year, will remain and remain focused on the interior of the US courthouse.”

Acting Homeland Security Secretary Chad Wolf said in a separate statement that he and Brown reached a joint plan to end violent activity in Portland directed at federal assets and law enforcement officials.

“This plan is possible due to the valiant efforts of DHS law enforcement officers protecting federal property in Portland for the past two months,” Wolf said. “The department will continue to maintain our current, augmented federal law enforcement personnel in Portland until we are assured that the Hartfield Federal Courthouse and other federal assets will no longer be attacked and that the seat of justice in Portland will be protected.”

Still, the evacuation details have been muddied, as White House spokeswoman Sarah Matthews said in a statement that “as the President and Secretary Wolf make clear, federal law enforcement officials will not leave until The seat of justice in Portland is not safe. “

Pence’s press secretary Devin O’Malley said the vice president told Brown that federal law enforcement would remain in Portland this week, until the violence directed toward them and the courthouse closed.

“The Vice President clearly stated that law and order should be restored in Portland,” O’Malley said in a statement. “Vice President Pence has welcomed Governor Brown’s decision to deploy the Oregon State Police in Portland and believes federal, state and local law enforcement can end violence directed at federal assets and law enforcement officers and the city’s streets. But can restore peace. “

The Trump administration highlighted the presence of US law enforcement around the courtyard in Portland earlier this month after experiencing nearly 40 nights of protests in the city in response to the death of George Floyd in Minneapolis in late May.

As the number of federal officials in Portland grew, state and local officials condemned their presence, saying officials were escalating tensions with protesters. On several occasions, federal officials guarding the courthouse used tear gas and other tactics to disperse the protesters, while the Trump administration said the protesters damaged projectiles at officers, set off firecrackers in the courtyards and Indiscriminately used lasers.

The deployment of federal law enforcement from the Department of Homeland Security was dubbed “Operation Hardworking Gallant” and included more than 100 officers of the Federal Security Service, Immigration and Customs Enforcement and Customs and Border Protection.

President Trump has defended the administration’s response to the unrest in Portland and launched a separate initiative through the judicial department to send officers to other U.S. cities in violent crime despite objections from its leaders Facing an uptake.

The president told reporters at the White House on Wednesday that the courtyard in Portland is “very well protected” and that officials “are not leaving until they have secured their city.”

“If they don’t secure their city soon, we have no choice, we’re going to go into it and clean it up,” he said. “We will do it very easily. We are ready to do it.”

Sara Cook contributed to this report.