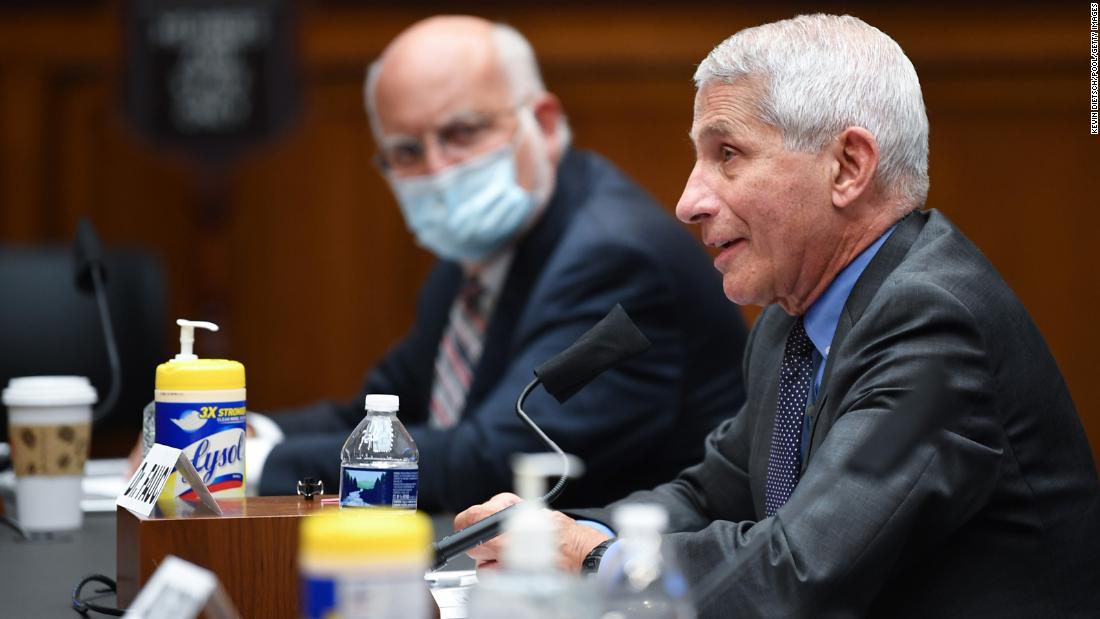 The Health, Education, Labor and Pensions panel hearing comes as multiple states struggle to contain the virus as case counts continue to rise across the country and states begin to reopen. The United States reported more than 40,000 new cases of Covid-19 on Friday, its biggest daily jump to date.

More than half of all states are seeing an increase in cases, and Florida, Texas and Arizona are being particularly affected. Texas has begun reducing its reopening, and Florida’s beaches have closed for the upcoming holiday weekend.
Fauci and Redfield testified before lawmakers last week, when Fauci said “we are going to do more tests, not less,” in response to President Donald Trump’s recent claim that he asked his administration to slow down the speed of testing during the pandemic.
Senators have been weighing another stimulus package in recent weeks as unemployment figures remain worrying and economic difficulties stemming from the pandemic persist. Republicans remain divided on the size and scale of the upcoming stimulus bill, and while it has been debated for months, the next phase of economic relief is still weeks away. But now there is general agreement that something must be done, something that was not always the case.
In the last round of Capitol Hill aid, Congress increased unemployment checks by $ 600 per week and added 13 weeks of pay, beyond what the states offer. The additional money will expire on July 31 without congressional action, but the 13-week extension will remain in effect until the end of the year. A second round of stimulus payments is on the negotiating table in Washington, but some of the 160 million Americans who raised money the first time may be left out, according to a more specific approach that the administration is pushing.

Republicans have focused on the last week of July to reach an agreement on the next round of stimulus legislation. Senate Majority Leader Mitch McConnell has been steadfast on that schedule for weeks and the administration is on board.

CNN’s Phil Mattingly and Katie Lobosco contributed to this report.