Ever wonder what the Gulf of Texas looks like from space? NASA has you covered. 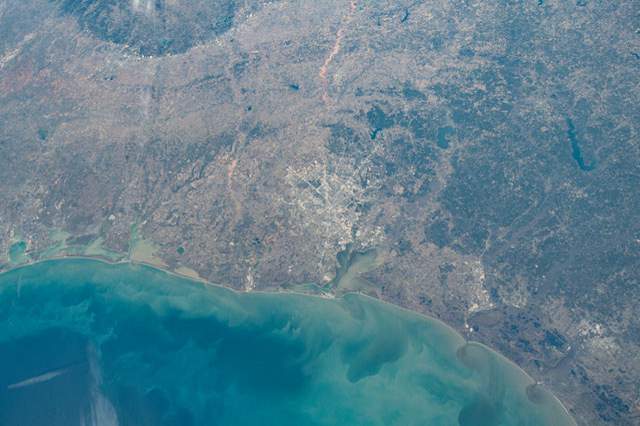 Have you ever wondered what the Gulf of Texas looks like from afar … or more specifically, from space?

Look no further as NASA has you covered.

A NASA astronaut aboard the International Space Station snapped this photo of the Texas Gulf Coast and shared it on social media on March 24.

What you see is much the same as what astronauts see, without the aid of cameras, telescopes, or other tools from the station windows.

According to a NASA press release, the photo focuses on Houston, home of NASA’s Johnson Space Center, where astronauts live and train.

If you’re from Texas, or just a big fan, you can see the Texas coastline along with narrow barrier islands that create protective bays between the Gulf of Mexico and the mainland.

According to NASA, the photo was taken on December 25, 2020, Christmas Day, with a Nikon D5 digital camera that uses a 24-millimeter lens and is provided by the ISS crew’s Earth Observations Facility. and the Earth Sciences and Remote Sensing Unit, Johnson. Space center.

You can even see parts of the Hill Country in the image, according to NASA.

“The region marks changes in topography, geology, ecology and climate, from flat, humid coastal wetlands to rocky hills with forests, dark green in the image,” NASA said. “The area is regionally known as the Texas Hill Country.”

The image was digitally cropped and enhanced to improve image contrast and lens artifacts were removed, according to NASA.

The astronaut was a member of the Expedition 64 crew.

You can view other photos taken by astronauts and cosmonauts by visiting the Earth Astronaut Photography Portal.

Space Curious: the origin story of the International Space Station

American astronaut launching next month may spend a year in space

NASA makes everything clear: Earth safe from an asteroid for 100 years