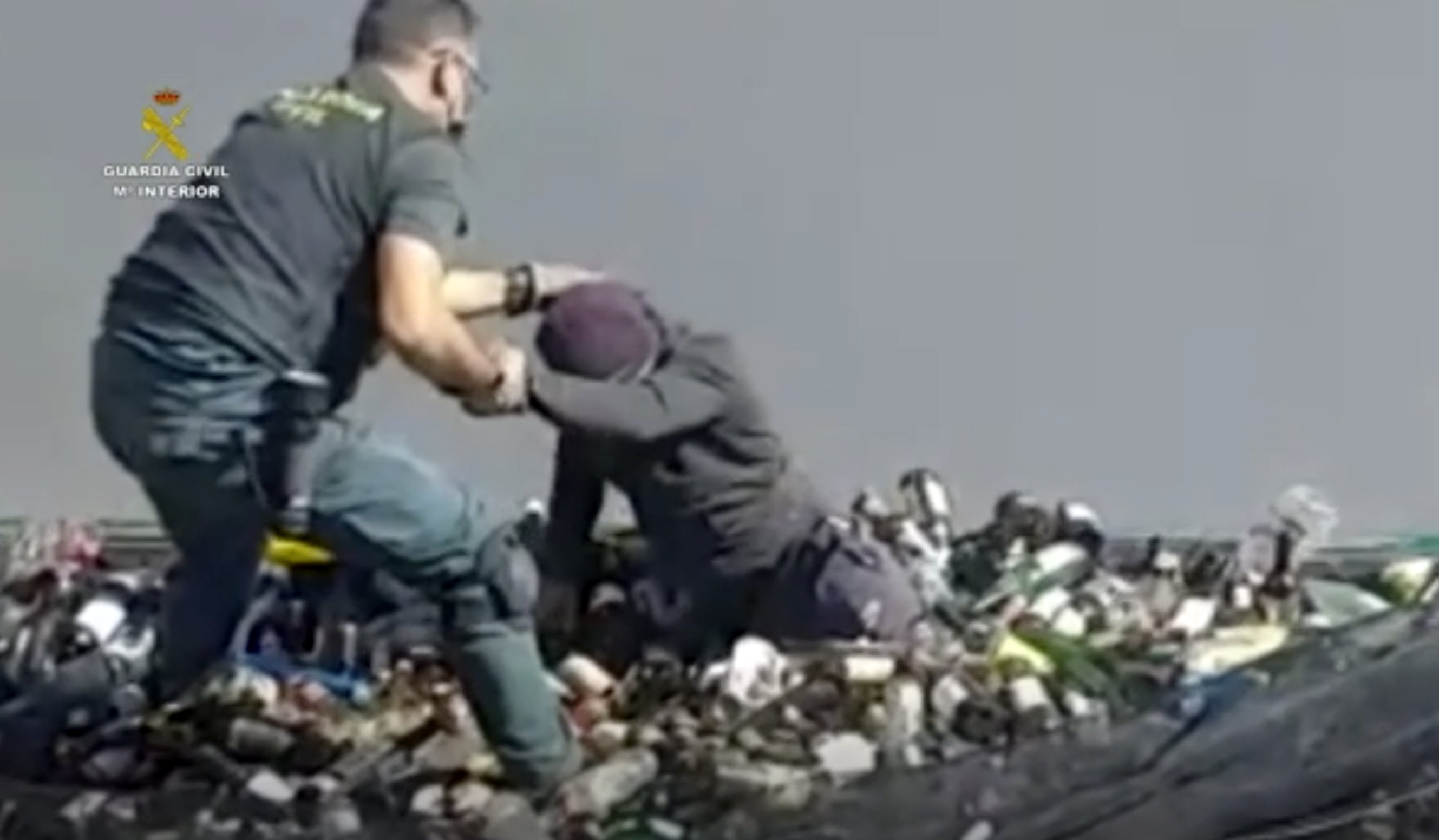 MADRID (AP) – Something seemed wrong to the guard inspecting sealed bags of toxic ash in the port of Melilla, one of Spain’s two small territories in North Africa. He then pulled out a knife, opened the bag, and found a motionless leg, confirming his suspicion that a person was inside.

He lifted and dropped his leg several times, without reaction. A few moments passed. Suddenly the leg jerked back and a young man emerged from the ashes, scared and disoriented, but alive.

The haunting scene in a video released Monday by the Spanish Civil Guard highlighted the great dangers faced by migrants and asylum seekers. in their desperate attempts to reach Europe.

The survivor was among 41 people who were found hiding amid the cargo in the Melilla port area on Friday, attempting to sneak aboard a ship that would take them across the Mediterranean Sea to mainland Spain.

Four of them were discovered buried in recycling bins under glass bottles, some broken with sharp edges.

Surrounded by Morocco, the small enclaves of Melilla and nearby Ceuta have been a target for many African immigrants for years. But the two territories are outside the Schengen area of ​​free mobility in much of Europe, so many of them are trapped in their effort to reach European soil.

The port of Melilla, where trucks and containers begin a journey to Spain that can last up to seven hours, offers many ways to escape. Some try to enter the fenced area of ​​the port by swimming there or hiding under vehicles, jumping on them when they slow down or stop at the port gates.

Others attempt to climb the fences and perimeter walls, sometimes falling and sustaining serious injuries.

With the help of search dogs and microphones to detect heartbeats, police often find people hiding in the middle of cargo, from containers to concrete mixers. This year alone, the Civil Guard said that it has identified 1,781 migrants who cross the security perimeter of the port of Melilla; last year, the figure was 11,700.

“We will never get used to it,” said Juan Antonio Martín, spokesman for the Civil Guard in Melilla.

Because the border between the North African territories of Spain and Morocco has been closed since the pandemic began in March, it is more difficult for migrants to enter. According to the Spanish Ministry of the Interior, nearly 1,500 people crossed into Melilla illegally last year, up from more than 5,800 in 2019.

But those who tried to leave Melilla last week were already in the enclave, Martín said. They were unable to take passenger ferries or flights to reach the mainland, either because they had no travel documents or because they illegally entered Spain in the first place.

Their nationality was not disclosed, but the spokesperson said most were of Moroccan origin.

While Morocco’s closure of the land border with Ceuta and Melilla came in the immediate aftermath of years of heightened border security, which had already led to a large drop in illegal crossings, Spain’s Canary Islands in the Atlantic Ocean have been become the main landing point. for people fleeing from North and West Africa to Europe.

Last year some 23,000 people arrived in the archipelago, most of them taken from the waters by the Spanish Maritime Rescue Service, and more than 500 died or disappeared in the attempt.

And there, too, rescuers sometimes faced the unthinkable. In December, the Spanish newspaper El País reported how a 14-year-old Nigerian spent two weeks at the helm of an oil tanker before being found by a patrol boat near the port of Las Palmas, on the island of Gran Canaria.