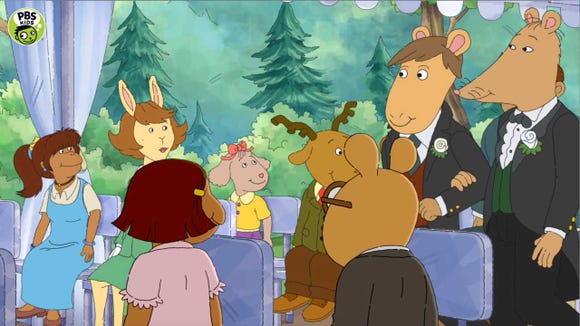 The "Arthur" program of PBS organizes a gay wedding in an episode called "Mr. Ratburn and The Special Someone". (Photo: WGBH and PBS KIDS)

The television channel did not broadcast the episode of May 13, titled "Mr. Ratburn and the Special Someone", according to multiple reports. Programming Director Mike McKenzie told NBC News that PBS alerted stations before "possible concerns of the viewer about the content of the program" and after watching the episode, several APT staff members decided to broadcast a replay on their station. place.

"The vast majority of parents will not have heard about the content, whether or not they agree," McKenzie said in a statement to NBC News and AL.com. "Because of this, we felt it would be a breach of confidence to broadcast the episode."

In the episode, Arthur and his friends listen to their longtime teacher, Mr. Ratburn, talk about their upcoming wedding. After much speculation about who she will marry, the children discover at the wedding that she is marrying Patrick, a new chocolatier in the city.

All children are delighted that their teacher is "with someone who is nice, kind, fun" and encourages Mr. Ratburn, except for a joke about the dancing skills of the newlyweds. The word "gay" is never mentioned.

"Parents have relied on Alabama Public Television for more than 50 years to provide programs for children that entertain, educate and inspire," McKenzie said in his statement. "Most importantly, although we strongly encourage parents to watch TV with their children and talk about what they learned later, parents are confident that their children can see APT without their supervision. We also know that children who are younger than the target audience of & # 39; Arthur & # 39; they also watch the program. "