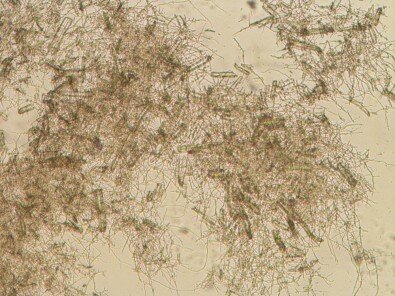 Researchers at the Brazilian Center for Research in Energy and Materials (CNPEM) have genetically produced a fungus that produces a cocktail of enzymes that break down carbohydrates in biomass, such as sugarcane waste (tops and leaves) and Industrially in fermented sugar for sugar. Efficient conversion to biofuels.

One of the main challenges is the development of low-cost enzyme cocktails in the production of second-generation ethanol.

Second generation biofuels are manufactured from a variety of non-edible biomass, including agricultural residues, wood chips, and waste cooking oil. The CNPEM research group’s process paves the way for the optimized use of sugarcane residues for the production of biofuels.

The fungus Trichoderma reesei is one of the most prolific producers of plant cell wall degrading enzymes and is widely used in the biotechnology industry. To increase its productivity as a biochemical for the enzyme cocktail in question, researchers introduced six genetic modifications to RUT-C30, a publicly available strain of fungi. He patented the process and reported it in an article published in the magazine Biotechnology for Biofuels.

“The fungus was biologically modified to maximize the production of these enzymes of interest. Using the CRISPR / Cas9 gene-editing technique, we used transcription factors to regulate the expression of genes associated with enzymes. Modified, removed diseases that caused problems with stability stability. Enzyme cocktails, and key enzymes are fungal deficient in nature. As a result, we find Fungus to be a cheap and abundant feedstroke, agroindustrial waste in Brazil. Were able to allow the production of enzymes in large quantities, ”Mario T. Murakami, director of the Scientific CNPEM’s Biorenewables Laboratory (LNBR), told Agresia FAPSEP.

According to the National Food Supply Company (CONAB), some 633 million tons of sugarcane are harvested annually in Brazil, generating 70 million metric tons of sugarcane waste (dry mass) annually. This waste is intended for fuel ethanol production.

Murakami stressed that practically all enzymes used in Brazil to decompose biomass are imported from some foreign producers who keep the technology under trade secret protection. In this context, the imported enzyme cocktail can represent as much as 50% of the production cost of a biofuel.

“Under the traditional paradigm, decades of study were needed to develop a competitive enzyme cocktail production platform,” he said. “Furthermore, cocktails cannot be obtained only from publicly available strains by synthetic biology techniques because producers used various methods to grow them, such as adaptive growth, exposing fungi to chemical reagents To do and select genomic stimuli. The most interesting phenotype. Now, however, thanks to advanced gene editing tools such as CRISPR / Cas9, we have been able to establish a competitive platform with some rational modifications in two and a half years. ”

Bioprocesses developed by CNPEM researchers produced 80 grams of enzymes per liter, the most experimentally supported titer by far, from low-cost sugar-based feedstock. Has been reported for racy. This is more than twice the concentration previously reported in scientific literature for fungi (37 grams per liter).

“An interesting aspect of this research is that it was not limited to the lab,” Murakami said. “We tested biotechnology in a semi-industrial production environment, scaling it up for a pilot plant to assess its economic suitability.”

Although the platform was adapted for the production of cellulosic ethanol from sugarcane residues, he said that it could break down other types of biomass, and that elevated sugars be used to produce other biorenewables such as plastics and intermediate chemicals Can.

The process had practical results (in terms of industrial application) under extensive research conducted by LNBR to develop enzymes capable of breaking down carbohydrates. Another study supported by FAPESP and published in Nature Chemical BiologyResearchers revealed seven novel enzyme classes present above all in fungi and bacteria.

The novel enzyme belongs to the glycoside hydrolase (GH) family. According to Murakami, these enzymes have significant potential for applications not only in the field of biofuels, but also in the pharmaceutical, food processing and textile sectors. Enzymes will induce novel industrial processes by the liver in various ways in which nature decomposes polysaccharides (carbohydrates made from many simple sugars).

These enzymes break down beta-glucans, some of the most abundant polysaccharides found in the cell walls of grains, bacteria, and fungi, and a large proportion of the world’s available biomass, indicating the potential use of enzymes in food preservatives and textiles Huh. In the case of biofuels, the important property is their ability to digest material rich in vegetable fibers.

“We are out to study the diversity of nature in degrading polysaccharides and how this knowledge can be applied in various industries,” Murakami said. “In addition to the discovery of novel enzymes, another important aspect of this research is the similarity network approach we use to produce a systematic and in-depth knowledge of this enzyme family. The approach allowed us to start from scratch and in a relatively short period of time Enabled. Reached in the most studied family of active enzymes on beta-1,3-glucans, with available information on specificity and mechanism of action. ”

The main criterion for classifying enzymes is usually phylogeny, that is, the evolutionary history of the molecule, while CNPEM researchers focus on functionality.

“Thanks to advances in DNA sequencing techniques, we now have many known genetic sequences and a well-established ability to study and characterize molecules and enzymes in terms of their functionality. As a result, we have developed a similarity network method Refined. And for the first time use it to study enzymes active on polysaccharides, “Murakami said.

Using the similarity network approach, the group classified seven subfamilies of enzymes based on functionality. Characterizing at least one member of each subfamily, the researchers systematically accessed a diversity of molecular strategies to degrade beta-glucans comprised of thousands of members of the enzyme family.

Phylogenetic analysis focuses on DNA regions that have been conserved over time, while classification based on functionality is based on non-unknown regions associated with functional differentiation. “It gave us efficiency and enabled us to group more than 1,000 sequences into only seven subgroups or classes with the same function,” Muraswamy said.

Because the approach was novel, the researchers conducted several other studies to double-check and verify the classification method. From seven groups of enzymes capable of reducing polysaccharides, they derived 24 completely novel structures, including various substrate-enzyme complexes, believed to be important in providing information to help understand the action mechanisms involved.

The study included functional and structural analyzes to understand how these enzymes act on related carbohydrates. Murakami said, “Polysaccharides come in dozens of configurations and are capable of a variety of chemical bonds.” “We really wanted to observe which chemical bonds and architectures are identified by each enzyme. For this reason, it is a combination of structural and functional data supported by analysis using spectroscopy, spectroscopy, mutation and diffraction experiments Was to be a multi-disciplinary study. Atomic structure. ”

In the “News and Views” section of the same Nature Chemical Biology, Professor Paul Walton, President of Bioinorganic Chemistry at the University of York in the United Kingdom, studied the “biochemical ‘tour day force’ for its innovative approach to evaluating glycoside hydrolase and praised its” tremendous insights “, which the researchers said Was “able to express and separate examples from each class [of enzymes] To test whether the differences in sequence between classes are reflected in their structures and activities ”.