‘Eject or kill’: Dozens of cars vandalized in an Israeli Arab city 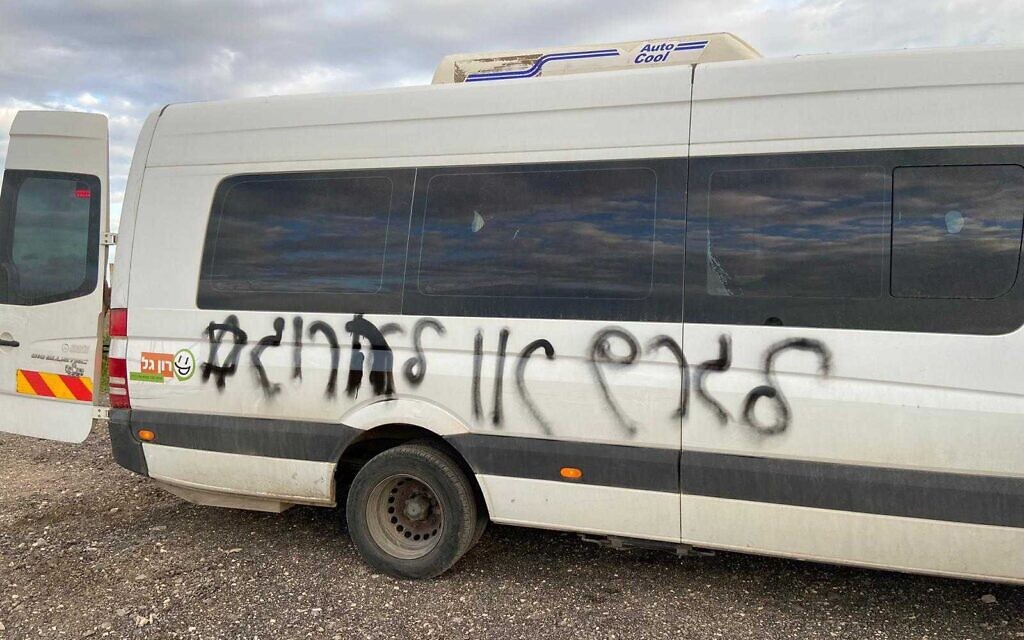 Dozens of cars had their tires punctured and several vehicles had graffiti painted in an alleged hate crime in the central city of Kafr Qasim on Wednesday night.

One of the vehicles from the Arab town was sprayed with the slogan “expel or kill” while another was applied a Star of David.

Police said they opened an investigation into the attack.

Anti-Arab vandalism by Jewish extremists has become a common occurrence in the West Bank, but is rarer within Israel.

Incidents of vandalism and attacks against Palestinians and Israeli security forces in the West Bank are commonly referred to as “price” attacks, and the perpetrators claim they are retaliation for Palestinian violence or government policies deemed hostile to the settler movement.

Arrests of the perpetrators have been extremely rare and human rights groups regret that the convictions are even more unusual, and that most charges in such cases were dropped.

Many of those Jewish terror suspects were represented by Itamar Ben Gvir, the far-right politician elected to the Knesset in Tuesday’s elections.

In response to the overnight attack, Meretz party chief Nitzan Horowitz made a direct connection between the vandalism and Ben Gvir’s party election with the help of Prime Minister Benjamin Netanyahu, who worked urgently to form a merger that would ensure that he crossed the electoral threshold and helped the prime minister form a coalition.

“Dozens of vehicles were painted and punctured. So that? Why? Blind hate, sick racism. And those who back him are the favorite partners of the corrupt, “said Horowitz, referring to Netanyahu, who is on trial for alleged corruption.

Settler violence towards Palestinians has skyrocketed in recent months following the death of 16-year-old settler Ahuvia Sandak in December during a police chase. The car Sandak was traveling in crashed after he and several others allegedly threw stones at the Palestinians.

On Sunday, a 17-year-old boy in Jerusalem was charged with reckless manslaughter for allegedly assaulting an Arab minibus driver who, while trying to flee, proceeded to ram and kill a protester.

The suspect was accused of throwing stones at the minibus driven by Ibrahim Hamed and opening the vehicle door while others shouted “Arab, Arab” and “we will kill him.” While trying to flee the assault, Hamed crashed his vehicle into Itamar Ben Abu, 47, and killed him.

Last Friday, a Palestinian village near Jerusalem was vandalized in an alleged hate crime attack.

Residents of Beit Iksa found two damaged vehicles and a Hebrew slogan graffiti on a nearby wall. The graffiti on the wall read “Greetings from Ahuvia”, with a Star of David next to it.

Earlier this month, a group of around 10 masked people, allegedly settlers, beat and threw stones at a Palestinian family in the West Bank in an attack that the family captured on video.

A member of the Alyan family after an attack allegedly perpetrated by masked settlers, south of the West Bank city of Hebron, March 13, 2021 (B’Tselem)

In February, a 17-year-old Israeli settler was charged with attacks on Palestinian homes and property. The defendant threw a stun grenade at two houses while the families slept inside, police say.

Along with seven others involved, the defendant also threw stones at four houses and vehicles, causing damage. As a result of the attack, a 61-year-old Palestinian was wounded in the forehead by broken glass, while his 17-year-old daughter suffered a severe attack of anxiety, dizziness and confusion.