Eight-Mile Fraz of Ice Age Animals in the Amazon Rainforest 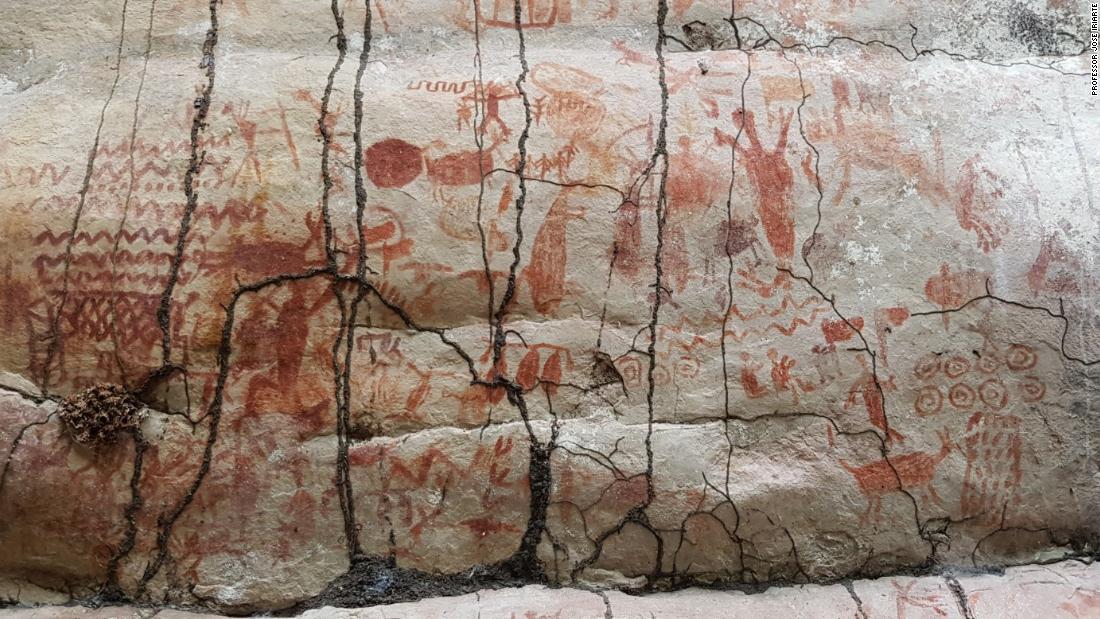 written by By Jack Guy, c.n.n.

Thousands of rock art paintings depicting heavy ice age creatures such as mastodons have been revealed by researchers in the Amazon rainforest.

According to a press release by researchers from Britain’s University of Exeter, the painting was probably made 11,800–12,600 years ago.

The paintings are set in three different rock shelters, the largest of which, known as Cerro Azul, has 12 panels and thousands of individual paintings.

Located in Serrania La Lindosa in modern-day Colombia, rock art shows how the area’s earliest human inhabitants would have teamed up with the Ice Age megafauna, which featured giant kites, mastodons, camels, horses, and three in pictures Ungulates toe with tights.

“These are truly incredible images, created by beginners to live in western Amazonia,” said Mark Robinson, an archaeologist at the University of Exeter.

“Pictures have a vivid and exciting glimpse Life of these communities. It is unbelievable for us to think between whom they lived, and hunted, the giant vegetarian, some who were the size of a small car. “

The red paintings, using pigments extracted from peeled ocher, constitute one of the largest collections of rock art in South America.

At the time the paintings were made, the Amazon was changing from the patchwork of savannas, tropical forests and thorny shrubs that we know today.

Experts say that the artists may have used the fire to lift it out of the rock and create a flat surface. While the paintings are exposed to the elements, they are protected by rock overhanging, meaning they are in better condition than other rock art found in the Amazon.

Some of them were painted so high on the rock that “special ladders drawn from forest resources would be needed”, according to the press release.

The people who painted the pictures were hunters, who ate palm fruit and tree fruit, as well as fishing in the nearby river for piranhas and crocodiles. Bones and plants also show that they ate snakes, frogs, armadillos, and rodents, including paka and capybara.

Researchers on the project are working to find out how humans first settled in the Amazon region, and how their presence affected biodiversity.

Jose Eriart, a professor of archeology at Exeter, told CNN that the findings are an early stage in a project that will last five years.

One of the immediate objectives, he said, is to document all rock art in the area and depict other animals.

“These rock paintings are a fantastic proof of how humans rebuilt the land, and how they hunted, farmed and raised fish,” Iriart said in a press release.

“It is likely that art was a powerful part of the culture and a way for people to become socially connected. The pictures show how people lived in the vast, now extinct animals between which they hunted. . “

Eritre was influenced by the realism of the paintings, which originated during a rare window in which early humans lived with megafauna.

“The level of observation of the organism was incredible,” he said.

A new TV series on Britain’s Channel 4, “Jungle Mystery: Lost Kings of the Amazon”, features rock painting, and the findings are also described in an article in a magazine called Quaternary International.

Robinson and Eriart worked on the project with Medellin in Bogotá, Javier Escitino in Colombia and Javier Acituno of Gaspar Morcot-Rios, Medellin, Colombia.

Communities in the local area were aware of rock painting, and researchers helped document them in the wake of a 2016 peace deal between the Colombian government and the FARC guerrilla group, which went disarmed after 52 years of conflict. Researchers worked on the site in 2017 and 2018.