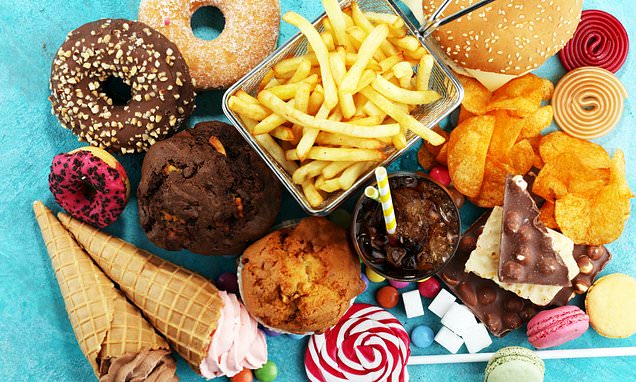 Having a single serving of ultra-processed foods including chips, candy, chocolate and hamburgers can increase your risk of dying from heart disease by 9%, a study shows.

Researchers at New York University used data from a study of 3,003 middle-aged adults to examine the role of processed foods in cardiovascular disease.

The team found that higher consumption of ultra-processed foods is associated with an increased risk of heart disease and worsens the more you eat.

“Our findings add to a growing body of evidence suggesting the cardiovascular benefits of limiting ultra-processed foods,” said Filippa Juul, lead author of the study.

Drinking low-calorie sodas and other “healthy” brand name snacks, including cereals and protein bars, was also associated with an increased risk of heart disease.

Some ultra-processed foods are unexpected, including “healthy” branded products.

Many fast food products would be included in the list, but the authors did not name any brands.

When foods are processed, they can remove good nutrients and other natural benefits, while adding non-beneficial nutrients and food additives.

The consumption of ultra-processed foods is linked to a number of health conditions and problems.

“The consumption of ultra-processed foods constitutes more than half of the daily calories in the average American diet and they are consumed increasingly around the world.

“Since poor diet is a major modifiable risk factor for heart disease, it represents a critical target in prevention efforts,” Juul said, adding that ultra-processed foods include many that are marketed as healthy.

This includes foods like protein bars, breakfast cereals, and most industrially produced breads.

“Population-wide strategies are needed, such as taxes on sugary drinks and other ultra-processed foods, and recommendations on levels of processing in national dietary guidelines,” Juul warned.

That is if governments want to reduce the intake of ultra-processed foods and, in turn, help people lead a healthier lifestyle.

“Of course, we must also implement policies that increase the availability, accessibility and affordability of nutritious and minimally processed foods, especially in disadvantaged populations,” added the author.

“On a clinical level, there is a need for a greater commitment to individualized nutritional counseling to adopt sustainable heart-healthy diets.”

The researchers used data from the Framingham Offspring Study to examine the role ultra-processed foods play in cardiovascular disease (CVD).

After excluding participants with pre-existing CVD or missing data, the study included 3,003 middle-aged adults with a mean age of 53.5 years.

More than half of the participants were women, 33.1% had received 16 or more years of education, and two-thirds were smokers or former smokers.

Overall, 5.8% had diabetes and 19% had high blood pressure, with the prevalence of both higher among those who eat a lot of ultra-processed foods.

Diet was assessed by mail using a food questionnaire in which participants reported the frequency of consumption of certain foods in the previous year, with options ranging from less than one serving per month to six servings per day.

The US Department of Agriculture Nutrient Database was used to calculate nutrient intake from reported dietary intakes and classified foods into five categories.

WHAT IS A CARDIAC ARREST?

Cardiac arrest occurs when the heart suddenly stops pumping blood through the body, usually due to a problem with the electrical signals in the organ.

This causes the brain to lack oxygen, causing patients to not breathe and lose consciousness.

Cardiac arrests are different from heart attacks, the latter occurring when the blood supply to the heart muscle is cut off due to a clot in one of the coronary arteries.

Common causes include heart attacks, heart disease, and inflammation of the heart muscle.

Drug overdose and loss of a large amount of blood can also be the causes.

Giving an electric shock through the chest wall via a defibrillator can reactivate the heart.

Meanwhile, CPR can keep oxygen circulating through the body.

The researchers looked at incidences of strokes, heart disease, and other related problems that appear suddenly and slowly over time.

During an average of 18 years of follow-up, a total of 648 cardiac events occurred, including 251 cases of sudden cardiovascular disease and 163 cases of sudden coronary disease among those involved in the study.

There were 713 deaths during the follow-up period, including 108 deaths from cardiovascular disease.

The findings have been published in the Journal of the American College of Cardiology.

OBESITY: ADULTS WITH A BMI OVER 30 ARE OBESE

Obesity is defined as an adult who has a BMI of 30 or more.

The BMI of a healthy person, calculated by dividing the weight in kg by the height in meters and the answer by the height again, is between 18.5 and 24.9.

Among children, obesity is defined at the 95th percentile.

The percentiles compare young people with others their own age.

For example, if a three-month-old baby is in the 40th percentile for weight, that means that 40 percent of three-month-olds weigh the same or less than that baby.

The condition costs the NHS around £ 6.1 billion, out of its approximate budget of £ 124.7 billion, each year.

This is because obesity increases a person’s risk for a number of life-threatening conditions.

Such conditions include type 2 diabetes, which can cause kidney disease, blindness, and even limb amputations.

Research suggests that at least one in six hospital beds in the UK is occupied by a patient with diabetes.

Obesity also increases the risk of heart disease, which kills 315,000 people each year in the UK, making it the leading cause of death.

Carrying dangerous amounts of weight has also been linked to 12 different cancers.

This includes the breast, which affects one in eight women at some point in their lives.

Among children, research suggests that 70 percent of obese youth have high blood pressure or high cholesterol, putting them at risk for heart disease.

And if children are overweight, their obesity in adulthood is often more severe.

One in five children start school in the UK overweight or obese, increasing to one in three by the time they turn 10.