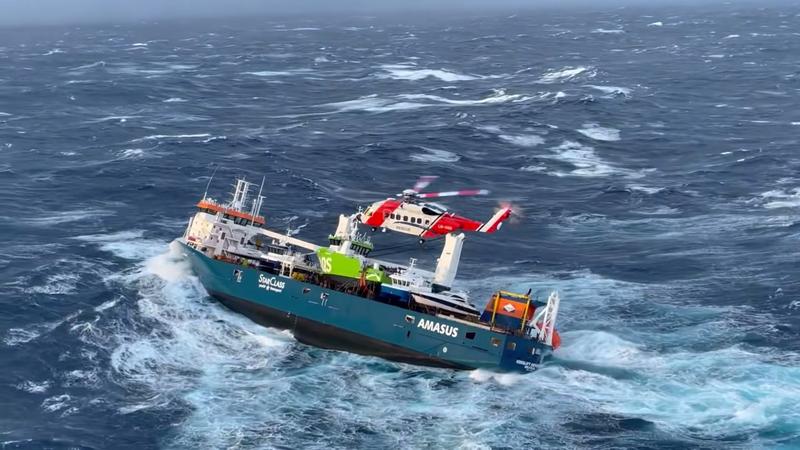 OSLO (Reuters) – Emergency response teams raced on Tuesday to prevent a Dutch freighter adrift in the North Sea from sinking and causing an oil spill off the coast of Norway after the crew had to be evacuated in stormy weather.

Images released by Norway’s Rescue Coordination Center showed some of the 12 crew members jumping into the sea late Monday from the mis-cataloged Eemslift Hendrika before being rescued by helicopter. Others were hauled directly from the deck.

All were brought to safety, but the ship has continued to sail towards land. It is currently about 74 km (40 miles) off the Norwegian coast.

The wind is expected to gradually shift the ship to a course parallel to the coast, giving more time for the salvage operation, Hans Petter Mortensholm of the Norwegian Coastal Administration told Reuters.

“Our calculations now indicate a window of opportunity to act, which will last until shortly after noon on Wednesday,” he said. “The risk of contamination is our main concern.”

The Hendrika has about 350 tons of heavy oil and 50 tons of diesel in its tanks, the Coastal Administration said.

Smit Salvage, a subsidiary of Dutch maritime services company Boskalis, told Reuters it had been hired to try to save the ship and was mobilizing a team to send it to Norway later on Tuesday.

If safety allowed, Smit would seek to have his own crew aboard the Hendrika and connect the vessel to a so-called anchor-handling tug, a powerful ship built to move platforms for the oil industry.

“Getting it to a tow line and a quieter place, that’s the goal,” said Smit Salvage spokesman Martijn Schuttevaer.

A Norwegian coast guard boat is on standby in the area and could also be used for towing, the Coast Administration said.

Built in 2015 and registered in the Netherlands, the 111.6-meter (366-foot) Eemslift Hendrika is a yacht transport vessel that carries smaller boats on its deck, according to Monaco-based Starclass Yacht Transport, which markets ship services.

One of the smaller boats moored to the deck fell over in the storm, the Coastal Administration said.

Reporting by Terje Solsvik in Oslo and Anthony Deutsch in Amsterdam; Edited by David Goodman, Gareth Jones and David Evans