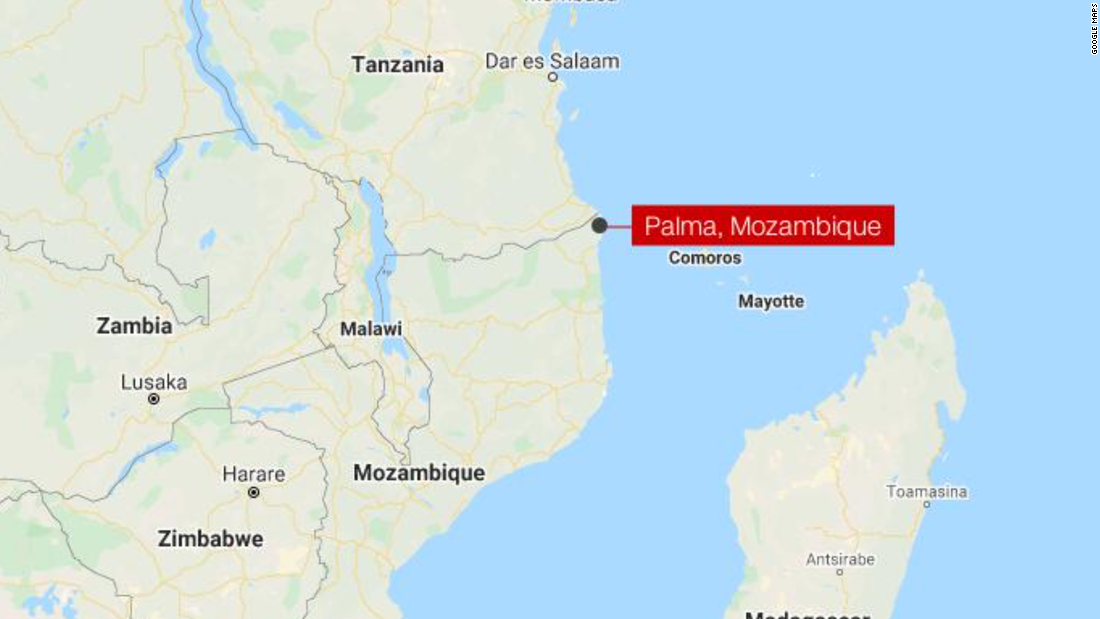 Witnesses reported seeing bodies in the streets after insurgents, believed to be affiliated with the Islamic State terror group, attacked Palma from three directions, Human Rights Watch said on Saturday.

The city is close to a large liquefied natural gas project run by the French company Total. The attack came hours after the Mozambican government and Total announced the resumption of operations at the vast Afungi project, north of Palma, where works had been suspended since January after a series of insurgent attacks.

Thursday’s video obtained by CNN shows helicopters, flown by government-deployed military contractors, hovering over a hotel in an apparent effort to secure an escape corridor for dozens of people who had fled there while the attack unfolded.

Among the people visible in the video of the hotel complex, at least 20 appeared to be foreign workers.

In another video obtained by CNN, a Mozambican who was also trapped in the Palma hotel called the situation “critical”, saying “we don’t have food, we only have water.”

“Helicopters are circling the area of ​​the Amarula Hotel to make sure the roads are clear to get to the beach, but as you can hear, we don’t know if this will be possible. The situation is critical. We have food. We only have water.” . Helicopters could be heard in the background as he spoke.

The Portuguese Foreign Ministry confirmed that one of its citizens was injured in a rescue operation in the region, the Portuguese news agency LUSA reported this Saturday.

A journalist working with CNN in Mozambique said that at least some of those trapped were able to reach the city of Pemba in a convoy on Friday.

Dewa Mavhinga, director of Human Rights Watch (HRW) for South Africa, said that the militants had “shot at civilians in their homes and in the streets of Palma, while trying to flee for their lives.”

HRW said it contacted several civilians by phone before communications with the city were cut off on Thursday.

He quoted a witness as saying that “people were running and shouting ‘Al-Shabaab is here … It is Al-Shabaab … They are killing everyone.’

The insurgents are known locally as “Shabaab” but have no ties to the Somali group of the same name. The group’s full name is Ahl al-Sunnah wa al Jamma’ah (ASWJ), and last year it formally joined the Islamic State’s self-proclaimed Central African Province. Earlier this month, the United States designated the group as a terrorist organization under the name “ISIS-Mozambique.”

Two hotel workers told HRW that gunmen had shot at people and buildings, including the hotel.

An audio recording received by CNN from someone at the hotel on Thursday also included heavy gunfire.

Mozambique’s Defense Ministry said on Thursday that an army operation was underway to restore security in Palma, but has not provided further updates.

It is unknown if the insurgents still control the city. On Friday, a senior security source with direct knowledge of the events told CNN that militants in Mozambique were likely still operating in the area.

The source said that fierce fighting between the insurgents and Mozambique forces and police raged on for hours, with private contractors providing helicopter gunships to drive the insurgent forces out of the city center.

Insurgents attacked military and police installations and stormed two banks in the city overnight on Wednesday and set them on fire, the source said.

Jasmine Opperman, a security analyst who writes a weekly summary of the events in Cabo Delgado, said the attack had demonstrated “meticulous planning” on the part of the insurgents.

Even before the assault on Palma, the city was inaccessible by road due to insecurity along the route to the south, leading to food shortages in the area.

Alexandre Raymakers, Senior Africa Analyst at Verisk Maplecroft, told CNN that the Palma assault was a “major setback for the government, especially after Total’s announcement, and seriously questions its ability to secure LNG projects vital to financial prosperity. long-term of the country. ” . “

Raymakers said that “Total’s decision to resume construction depended on Maputo guaranteeing a 25-kilometer security perimeter around the Afungi peninsula, which would include Palma.”

In August last year, ASWJ organized a large-scale assault on the port of Mocimboa da Praia and continues to occupy the area despite government efforts to retake it.

ASWJ has made much of Mozambique’s northernmost province, Cabo Delgado, inaccessible and unsafe, as its attacks have grown in scope and sophistication since 2017.

Raymakers says that “ASWJ’s combat capability, command and control, and overall confidence have grown tremendously in the last year.”

Clashes between the group and government forces have left more than 1,500 civilians dead and more than 600,000 displaced, according to HRW.