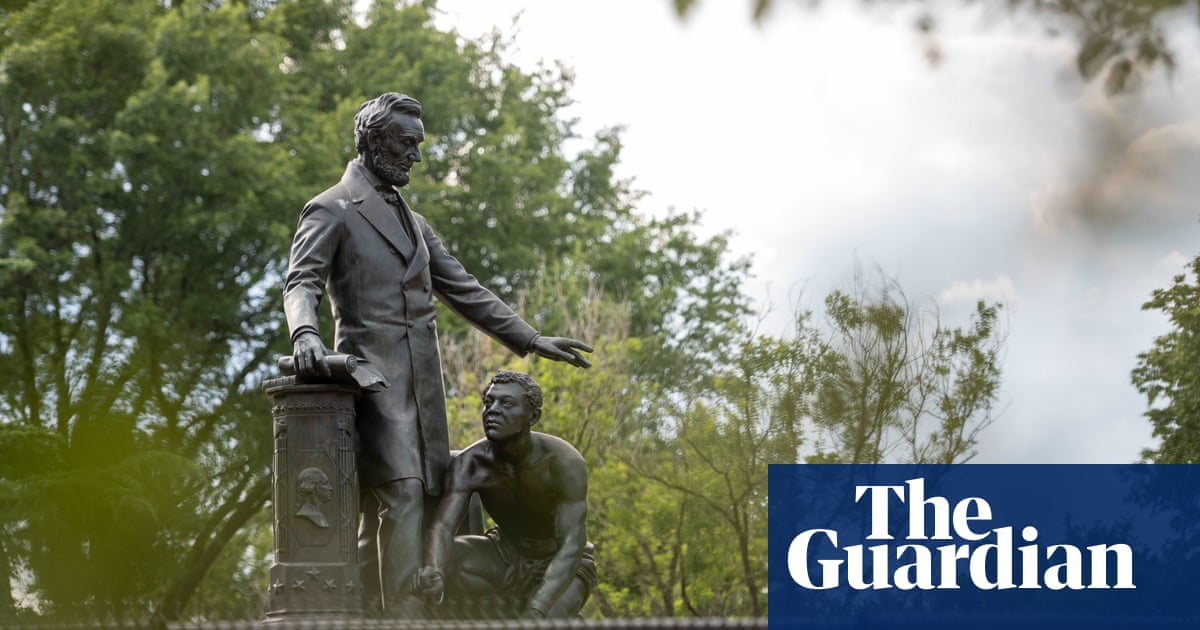 A discussion among history professors about a statue that many protesters say should be removed from Lincoln Park in Washington led to the discovery of a letter in which Frederick Douglass described his feelings about it.

“The black here, though he is getting up, is still on his knees and naked,” the civil rights activist wrote to the national republican newspaper in 1876, about the statue of Abraham Lincoln, the sixteenth president, standing over a man who broke his chains. . .

“What I want to see before I die is a monument that represents the black, not kneeling like a four-legged animal, but standing as a man.”

Amid protests over structural racism and police brutality, debate over such statues has erupted. Donald Trump has made defending the monuments to Confederate leaders and figures with outmoded views on race a central part of his campaign for reelection.

Until now, accounts of Douglass’ views on the Lincoln statue have been based on an assistant’s description of his presentation, but written 40 years later. The exchange that led to the discovery of Douglass’s letter was between Jonathan White of Christopher Newport University in Virginia, advocating for the preservation of the statue, and Scott Standage of Carnegie Mellon University in Pennsylvania, saying it should go down.

Standage found the letter through newspaper.com searches using “couchant,” a distinctive adjective that Douglass appreciated. He told the Wall Street Journal that Yale’s David Blight, who won a Pulitzer Prize for his 2018 Douglass biography, was “practically stunned” when told of the discovery.

Douglass was born into slavery in 1818, but escaped and became a dominant figure in American public life. He died in 1895.

The statue in Lincoln Park was largely paid for by African Americans and dedicated 13 years after the Emancipation Proclamation of 1863 and 11 years after the Lincoln assassination and the end of the civil war.

This week, Eleanor Holmes Norton, a non-voting member of Congress from the District of Columbia, said: “Although previously enslaved Americans paid for the construction of this statue, the design and sculpture process was done without their input, and it shows. . The statue in no way notices how enslaved African Americans pushed for their own emancipation. ”

A copy of Thomas Ball’s work will be removed from the exhibition in Boston, but on Sunday Lincoln biographer Sidney Blumenthal pointed out why the sculptor used the now controversial pose: it was a development of the symbol of the abolitionist movement, adopted by Americans from the British. . anti-slavery activist Josiah Wedgwood.

Although Ball did not produce “much of a statue,” Blumenthal said, “it is ironic that people have lost the historical memory of abolitionism. The kneeling slave was at the head of the Liberator,” the abolitionist newspaper of William Lloyd Garrison, “and it was a very widespread image. “

Blumenthal also noted that, contrary to Holmes Norton’s assertion, Douglass was part of the committee that approved Ball’s design.

In his newly discovered letter, Douglass writes: “Admirable as is the monument of Mr. Ball in Lincoln Park, it does not seem to me that it tells the whole truth, and perhaps no monument could be made to tell the whole truth of any subject that may be designed to illustrate. “

He goes on to point out what is now a complicated political reality.

“The very act of breaking the chains of blacks was the act of Abraham Lincoln and is beautifully expressed in this monument. But the act by which the black became a citizen of the United States and invested in the elective franchise was pre-eminently the act of the president [Ulysses] S Grant and is nowhere to be seen at the Lincoln Memorial.

Grant commanded the Union armies that defeated the Confederacy in the civil war. As president, he oversaw constitutional amendments that gave African American citizenship and African American men the vote, fought the Ku Klux Klan, and championed Reconstruction.

But Grant also married a slave-owning family and at one point owned and released a enslaved man. In San Francisco last month, a statue of Grant fell.

Blumenthal pointed out a possible motivation for Douglass’s thoughts about Grant. By 1876, Douglass had painfully parted ways with Garrison and had become a “Republican Party stalker or even a party pirate” who wanted Grant to win a third term and then be appointed Minister of Haiti and Marshal of the United States to the District of Columbia.

Some historians, including Blumenthal, advocate adding figures in Lincoln Park, perhaps from Douglass, black Union soldiers, or Charlotte Scott, a formerly enslaved woman who led the fundraiser for the Lincoln statue. In his letter, Douglass offers such a suggestion.

“There is room in Lincoln Park for another monument,” he writes, “and I discard this suggestion until the end so that it can be taken and put into practice.”

In fact, there is another statue in Lincoln Park, for African American educator and civil rights activist Mary McLeod Bethune.

On its website, the US National Park Service acknowledges that “for many people, including Frederick Douglass, [Lincoln] The monument perpetuates many stereotypes about the ability and participation of African Americans in anti-slavery activity. “

But also notice a previous change. The Lincoln statue was originally facing west toward the United States Capitol. In 1974 he was turned east, to face Bethune.