Did McCloskeys have the right to aim guns at protesters?

June 30, 2020 U.S. Comments Off on Did McCloskeys have the right to aim guns at protesters? 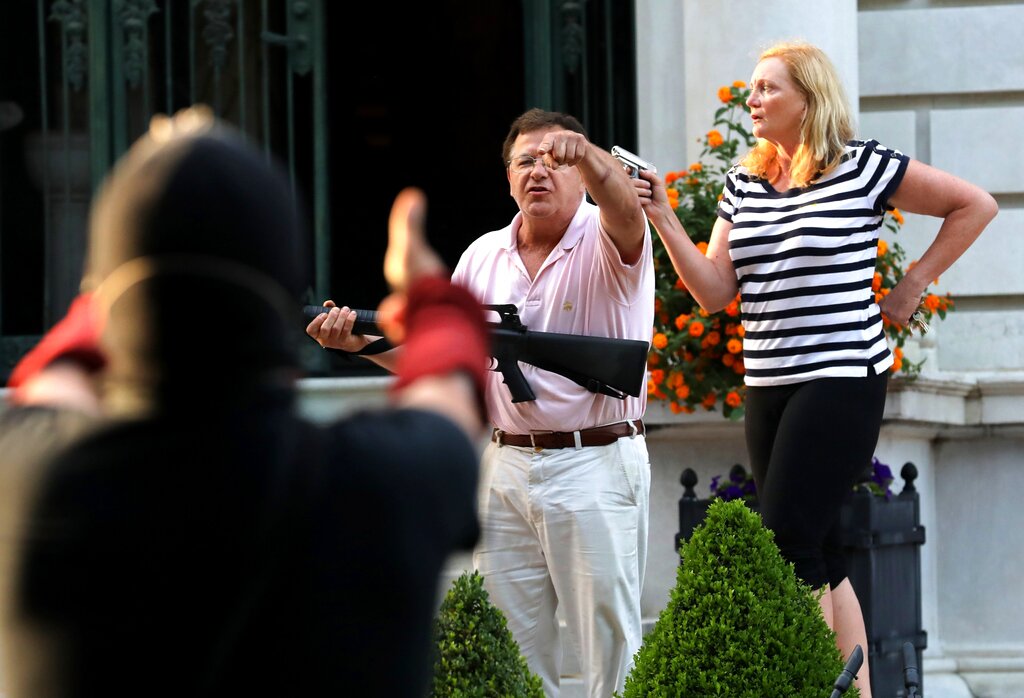 The St. Louis couple who pointed pistols at protesters passing their house say they feared for their lives because of the “angry crowd.”

Mark McCloskey, 63, and his wife, Patricia, 61, both personal injury attorneys, were caught on video brandishing weapons and yelling at protesters who were due to demonstrate in front of the mayor’s house on Sunday night.

Daniel Shular, a reporter, took one of the videos and said he watched the entire incident over the course of 10 minutes. He said the crowd of protesters (estimates range from 300 to 500) had entered the gated neighborhood and were passing the McCloskeys’ home. The front yard is not fenced.

Mark McCloskey told CNN affiliate KMOV that “a crowd of at least 100 went through the historic wrought-iron gates of Portland Place, destroying them, rushed to my house where my family was dining outside and made us fear for our lives “

Shular, however, told CNN that protesters entered through an open door. It was not damaged at the time, he said.

McCloskey told KMOV that the entire neighborhood is private property, with signs prohibiting anyone who is not a resident from entering. “There are no public sidewalks or public streets,” he said. “… We were alone in front of an angry crowd.”

In the Shular and Avery Risch videos, the McCloskeys yell, “Get out! This is private property! He’s holding a rifle and she’s holding a gun.

It also appears that the couple and the protesters exchange words, but what is said is not clear. Mark McCloskey claims that some protesters made death threats.

But in a series of tweets that address the McCloskey topic, University of Kansas law professor Corey Yung said Missouri law “does not allow lethal force to be used to merely defend private property (except the home)”.

The St. Louis Metropolitan Police Department told CNN that it is investigating the incident. City Circuit Attorney Kimberly M. Gardner released a statement that she was alarmed by the events and that her office is investigating.

Protesters walking down Portland Place were heading to the nearby home of Mayor Lyda Krewson. They intended to speak out against an incident on Friday in which she read aloud at a press conference the names and addresses of people who had written letters calling for police reform.

A couple left their home and pointed weapons at protesters in their neighborhood #StLouis #lydakrewson pic.twitter.com/ZJ8a553PAU

The McCloskey House (white stone) is beyond the gates that block access to Portland Place.