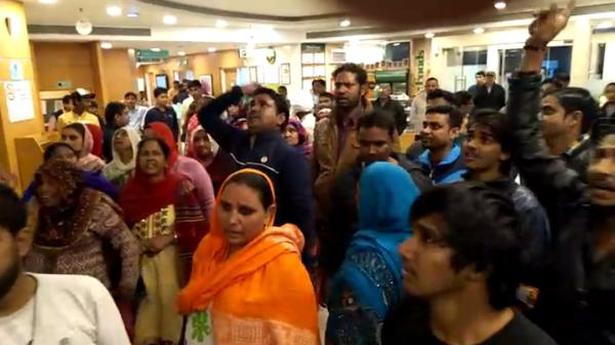 In a shocking incident, the premature twins were allegedly declared dead by the doctors of the Max Hospital in Shalimar Bagh and handed over to their parents, who realized that one of them was alive only when they were on their way to perform the last rites Police recorded a case on Friday based on a complaint filed by the family.

The family said that their daughter-in-law Varsha, 20, gave birth to twins, a boy and a girl, on November 30 in the morning. The doctors allegedly declared that the girl was stillborn. The boy was pronounced dead a couple of hours later.

Deepak, the woman's brother-in-law, said that Varsha, who was six months pregnant, had complained of stomach pain on November 28. She was taken to a nursing home in Nangloi where the doctors said her condition was critical.

"It was then that we took her to the Max Hospital in Shalimar Bagh," he added.

On November 29, the doctors allegedly told the family that there was a threat to Varsha's life and that she needs to be operated on for delivery of the children.

"Early in the morning, they told us about the operation and we told them they should do whatever is important for their safety," he said.

The twins were born around 7.30 in the morning. The doctors allegedly told the family that the girl was born dead.

"We were told that the child was alive and they will keep him under observation, they said they would charge ₹ 50,000 per day at the daycare and that he should stay there for three months." We agreed, "Deepak said.

However, around 12.30 p.m., a doctor allegedly told the family that the child did not survive.

Deepak said the two twins were supposedly wrapped in sheets and plastic and handed over to the family after an hour.

"We were taking the twins for the last rites and we had reached Madhuban Chowk, the child was in the lap of a relative when he felt some movement, we quickly unwrapped the baby and discovered that he was breathing heavily," he said.

The family took the child to a nursing home in Pitampura, where they are monitoring him.

"He is in support of life, the doctors in the nursing home told us that the boy had several infections because he was exposed to the environment and had been wrapped in plastic, they have not told us if he will survive," said Deepak, adding that the family was calling the child & # 39; Champ & # 39 ;.

"We are registering a case under Section 308 (Attempt to commit culpable homicide)," he added.

The family claimed that although the police had cooperated with them, the FIR was registered after they organized a protest on Thursday and Friday calls for strict action against the doctors.

"This should not happen to any other family, it has been extremely traumatic for us," Deepak said.

Meanwhile, Max Hospital, in a statement, said they are "shocked and worried about this rare incident" and have begun a detailed investigation.