May 26, 2020 Health Comments Off on Defects in developing frog brain can be prevented or repaired with bioelectric drugs 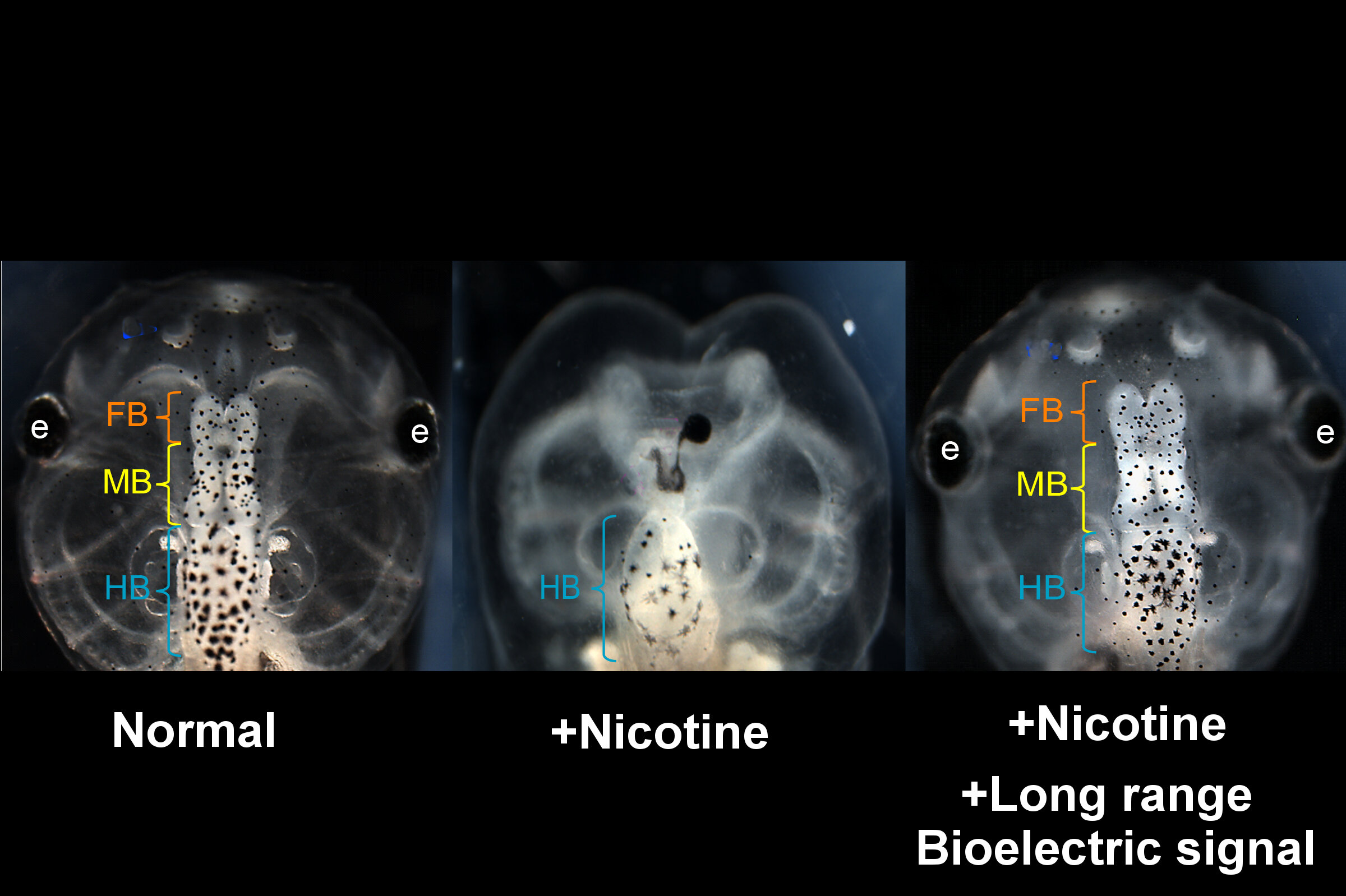 Researchers led by biologists at Tufts University have discovered that the brains of developing frog embryos damaged by nicotine exposure can be repaired by treatment with certain drugs called “ionoceuticals” that drive the recovery of bioelectric patterns in the embryo, followed by repair of normal anatomy, gene expression and brain function in the growing tadpole. The research, published today in Frontiers in Neuroscience, introduce intervention strategies based on restoring the bioelectric “blueprint” for embryonic development, which the researchers suggest could provide a roadmap for the exploration of therapeutic drugs to help repair birth defects.

Earlier studies had shown that nicotine disrupts the normal electrical patterns in the brain of the growing embryo, basically washing out, or reducing the contrast of the bioelectric blueprint—a “map” of varying voltage levels around the cells that guides the pattern and growth of tissues and organs. Nicotine in humans has been linked to prenatal morbidity, sudden infant death, attention deficit hypersensitivity disorder (ADHD), and other deficits in cognitive function, learning, and memory, but many questions had remained about how this molecule you encourage structural defects in the brain.

The authors applied nicotine to developing frog embryos to create neural defects with the intention of identifying specific interventions that could reverse the chemical’s harmful effects. Their previous research identified one particular element in the natural electric signalling that controls brain development, hyperpolarization-activated cyclic nucleotide gated channel 2 (HCN2), which was able to restore the bioelectric patterns—much like dialing up the contrast with a photo edit tool—and protect against nicotine-induced defects.

There are two major new discoveries in this study. First, unlike the prior work in which a form of gene therapy modifying the expression of HCN2 was used to repair the defects, the new experiments showed that the same effect can be achieved without introducing a gene—instead, small molecule drugs were used to activate HCN2 channels already present in the frog embryo. Second, the researchers demonstrated that the electrical patterning information that governs brain development can be reset from a distant location on the embryo.

“What was remarkable about the experiments in this study is that when we increased expression of HCN2 at a distance from the brain, in non-neural regions, the defects in the brain were still repaired or prevented,” said Michael Levin, Vannevar Bush Professor of Biology at Tufts University’s School of Arts and Sciences and director of the Allen Discovery Center at Tufts. “We saw that HCN2 in one part of the embryo could restore the bioelectric pattern not only locally, but at a distance as well.”

“The instructions to build a fully grown animal, including organs as complex as the brain, are distributed among all the cells of the embryo,” he added. “These results suggest that we might not have to directly target the damaged region, and we can use drugs instead of genetic manipulation, which opens a lot of opportunities for biomedical deployment.”

In a developing embryo, the bioelectric signals to help guide the patterning of tissue and organ formation, as well as regeneration after injury. They are formed by electrically charged ions moving in and out of cells to create voltage differences across the cell membranes. The pattern of voltage differences among the entire ensemble of cells in the embryo helps guide asymmetry between left and right sides of the body, the formation and development of the heart, muscle, limbs and face, and of course the growth and organization of the most complex organ in the body—the brain.

A computational model of an ensemble of cells representing an embryo and its electrical patterns confirmed that rescuing normal brain development from nicotine damage did not require specific targeting of the damaged region. HCN2 increases the hyperpolarization of a cell (increased internal negative charges), so when the model was asked to hyperpolarize a small patch of tissue far from the brain, that patch could propagate and restore polarization of regions all the way to the brain, setting the stage for normal development.

“When thinking about birth defects, especially involving the brain, these results suggest that we don’t need to target the specific region that is damaged. We can place the fix almost anywhere in the embryo, and the information will communicate with the rest of the embryo to reset the body’s instructions back to normal,” said Vaibhav Pai, Ph.D., research scientist at the Allen Discovery Center at Tufts university and first author of the study. “That led us to think, could we find a drug that activated HCN2, and use that to prevent defects anywhere in the embryo, or even repair defects that are already underway?”

Drugs that activate HCN2 exist—lamotrigine and gabapentin—and they are already FDA approved for other indications. The researchers again exposed the frog embryos to nicotine, and then treated them with the drugs at different stages of embryonic development. Nicotine-exposed embryos that were not treated with drugs led to about 68% of tadpoles with brain defects. By comparison, treatment of nicotine exposed embryos with lamotrigine or gabapentin led to significant reduction in brain defects (as few as 10% and 16% of tadpoles with brain defects, respectively).

Restoration extended beyond electrical and physically observed defects, as the authors demonstrated that the nicotine-exposed tadpoles treated with the drugs not only restored expression of genetic markers of normal brain development, but remarkably, exhibited normal learning capacity (e.g. training to avoid red light), which is lost in untreated nicotine-exposed tadpoles, showing a very complete rescue from molecular histology to behavior.

Citation:
Defects in developing frog brain can be prevented or repaired with bioelectric drugs (2020, May 26)
retrieved 26 May 2020
from https://medicalxpress.com/news/2020-05-defects-frog-brain-bioelectric-drugs.html

This document is subject to copyright. Apart from any fair dealing for the purpose of private study or research, is not
part may be reproduced without the written permission of. The content is provided for information purposes only.