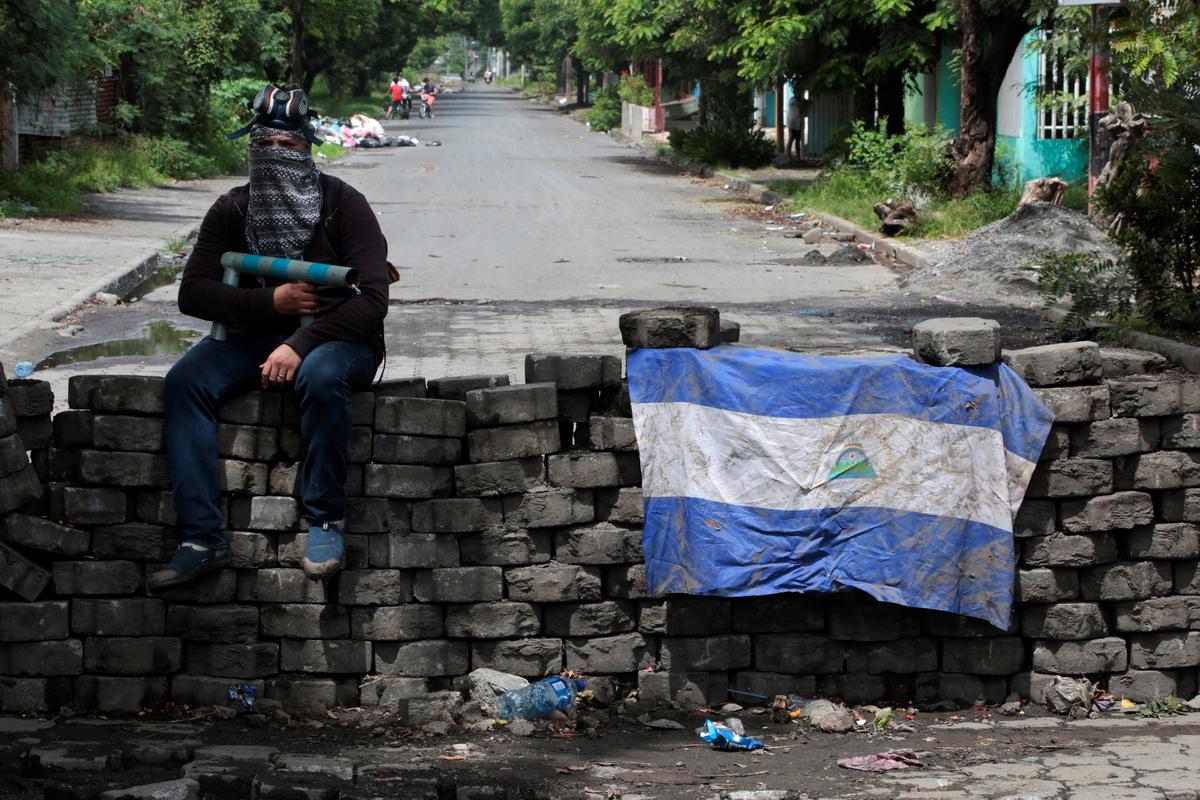 MANAGUA, Nicaragua (Reuters) – Eight people were killed on Saturday in a shootout and fire that broke a truce reached hours earlier between President Daniel Ortega and protesters, and civic leaders condemned the violence while pledging to continue talks with the president. government .

A man holding a homemade mortar sits on a barricade in Managua, Nicaragua on June 16, 2018. REUTERS / Oswaldo Rivas

The crisis in Nicaragua, the bloodiest confrontations since the end of the civil war in 1990 , has lasted two months and claimed at least 170 lives The riots in the morning came hours after Ortega and the protesters reached an agreement to end hostilities, clear obstacles and allow a foreign investigation.

Michael Healy, president of the union of agricultural producers, blamed the government and the authorities for the death of six people, including two children, while the flames consumed his house in Managua after a confrontation with the police. Two others died in the shooting.

"We went to sleep in peace and tranquility, and the sad thing was to wake up to the death of this family, how they were burned," Healy said at the end of conversations with the government moderated by the Catholic Church.

"The government wants us to leave this table, and we're not going to let that happen … it's the only way to end this," he added.

A woman is outside the jail while holding a photograph of her son who was detained during recent protests, in Managua, Nicaragua, on June 16, 2018. REUTERS / Oswaldo Rivas NOT ENDORSED. WITHOUT ARCHIVES.

The dialogue proceeded as scheduled, with the government and civic leaders agreeing to establish working groups to debate proposals, including democratic reforms, the mediators said in a statement. The talks will resume on Monday.

Responding to the unexpected outbreak on Saturday, the national police in a statement attributed the morning's shots to the demonstrators, and said that two men had died.

Police also said that firefighters fighting the fire were attacked by masked "criminals" and would investigate the cause of the fire.

The government did not respond to a request for comments on the reports.

The head of the Organization of American States, Luis Almagro, said in a tweet that his organization "condemns this act of terror that is a crime against humanity."

"This is a mbadacre, outrageous, these policemen surrounded the house and burned it after my nephew refused to allow snipers to be put on the roof," José María Hernández, uncle of the building's owner, told Reuters. He died in the fire, in front of the smoking remains.

Ortega's surprise decision in April to cut pension benefits to cover a growing social security breach caused demonstrations that quickly became fatal and led to demands for his resignation.

The Nicaraguan Center for Human Rights said that at least 170 people died in eight weeks of clashes between pro-Ortega forces armed with badault rifles and pistols and demonstrators armed with stones, slingshots and homemade mortars.