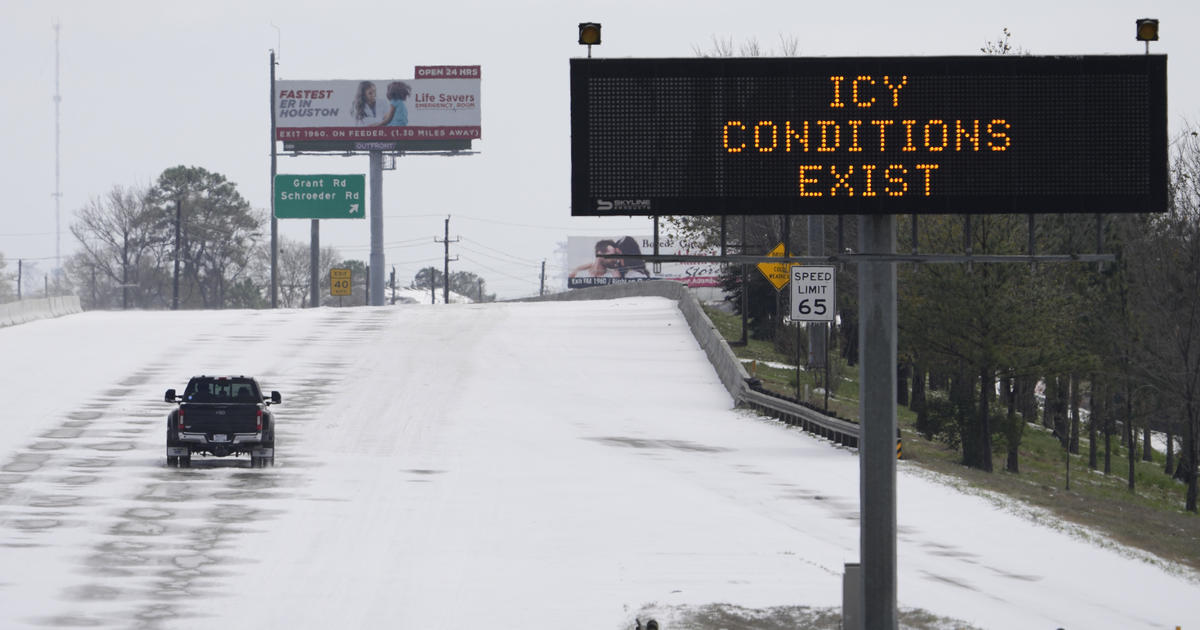 At least eleven deaths have been linked to a dangerous winter storm system that is breaking records across the country. About four million homes and businesses in Texas were without power early Tuesday as the electrical system struggled to keep up with demand, according to poweroutage.us.

Among the dead were a woman and a girl who were in an attached garage in Houston where a car was being run because the lack of power meant there was no heat in the house, reports the CBS affiliate there, KHOU-TV. Authorities said they suffered carbon monoxide poisoning. So did a man and a boy from the same family, who were hospitalized. There was no word on his condition.

In Fort Worth, two people were in critical condition and one was in serious condition from what was believed to be carbon monoxide poisoning, reports CBS Dallas. A child was also among those outmatched, but was said to be in good condition.

Also in Texas, a 78-year-old man died after falling in the front yard and being trapped in the cold for two hours.

Two people lost their lives in Tennessee, two in Kentucky and one in Louisiana, authorities said.

Abilene, Texas, tweeted that it “shut off the water as a result of power outages from both power sources at the three (city’s) water treatment plants.” It was not known when service would be restored.

The record cold snap turned Texas into a tundra. The gusts hit South Texas, blanketing Galveston’s sandy beaches. The Galveston city manager has warned that infrastructure damage caused by extreme temperatures could rival the cost of a hurricane.

Frozen roads caused an 18-wheeler to spin out of control near Austin. A man nearly lost his life, jumping a few seconds before a car lost control and crashed into a police patrol car.

“Ultra-low temperatures will last for several days, which means that what is frozen will remain frozen for a long period of time,” said Texas Governor Greg Abbott.

He tweeted that the National Guard was “deployed across the state to help move vulnerable Texans to warm shelters.”

The historic storm also caused problems across the country.

Vermont firefighters rescued a young man from the freezing waters after he fell through the ice. Tennessee’s highways turned to ice rinks after freezing rains fell. In Little Rock, Arkansas, cars were stopped on a slippery road, trapping nurses who had just finished their shift.

The temperature in parts of Oklahoma fell below 20 degrees for five days in a row for the third time in history. With another storm looming, crews worked to clear the snow as quickly as they could.

In Louisiana, the cold caused a transformer to explode and a fireball to smash through power lines.

The agency that oversees the Texas power grid has declared its highest emergency level in more than a decade.

Power outages are also complicating the fight against the pandemic. After a medical center that stocked vaccines in Houston ran out of power, medical officials rushed to use them before they went bad.