So many spooks puns, so little time!

Dancing With the Stars celebrated Halloween on Monday night, always one of the ABC reality hit’s craziest episodes of the year, with a bunch of pranks, inventive routines and the first team dances of the season. Unfortunately, with some treats came a nasty trick, as another couple was eliminated  from the competition.

The couples that found themselves in jeopardy? Nikki Bella and Artem Chigvintsev, Vanessa Lachey and Maksim Chmerkovskiy, Terrell Owens and Cheryl Burke, and Drew Scott and Emma Slater.

And the pair that was eliminated in the seventh week of the competition was…Nikki and Artem AND Vanessa and Maks. It was a surprise double elimination shocker! (NOT COOL, DWTS. NOT COOL.)

Here’s a rundown of the night’s performances:

Victoria Arlen and Val Chmerkovskiy: 27/30
After finding themselves in jeopardy last week, the pressure was on for the couple’s ghostly Viennese waltz. “Victoria survived death, I think she can survive Jordan and Lindsey,” Val said, noting the two frontrunners have dance experience. The stress lead to a bit of tension during the couple’s rehearsal, with Victoria finally admitting she was feeling closed off and was struggling to “let her guard down.”

But she was able to! “I thought the routine was super and I thought you danced with a naturalness…it was beautiful,” Len Goodman said. 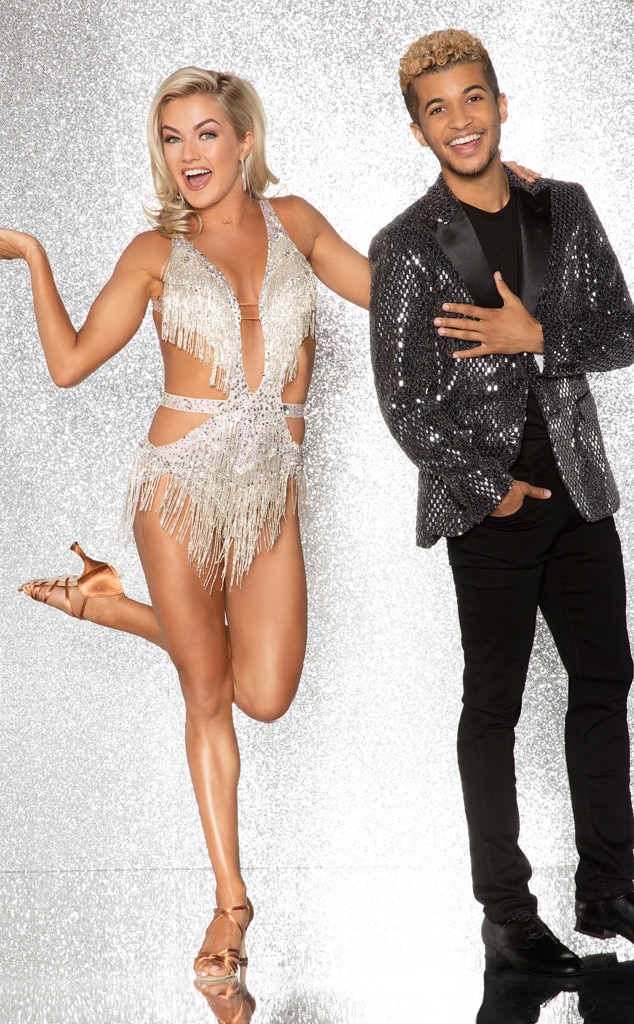 Jordan Fisher and Lindsay Arnold: 30/30
The frontrunners decided to bring a fairy tale to the ballroom, giving their paso doble a Little Red Riding Hood spin. (Fun fact: Mark Ballas used to train Lindsay Arnold, so it’s now mentor vs. student, as their two celebs seem to be battling it out for best in the competition.)

Despite a hiccup (the door Lindsay was supposed to enter through didn’t open!), the judges loved it. Bruno Tonioli called Jordan “the undisputed leader of the pack.” Len said, “You little devil, you dance like an angel!”

Nikki Bella and Artem Chigvintsev: 24/30
The duo is clearly getting along, as Nikki was trying to get Artem a date in their pre-performance package. As for their jive, they put an over-caffeinated spin on “I Put A Spell on You,” courtesy of coffee from “Spellbucks.” (HA, get it?!)

Vanessa Lachey and Maksim Chmerkovkiy: 24/ 30
Another couple, another reference about Jordan and Lindsey being the best. But Maks thinks they are still in the conversation for the finals. Unfortunately, their zombiefied paso doble didn’t wow the judges. “It’s hard because I have such high hopes for you,” Carrie Ann Inaba said. “Sometimes, you lose your balance.”

Terrell Owens and Cheryl Burke: 25/30
LOL, never forget that Shania Twain gave T.O. a 10. But his trick-or-treating tango impressed the judges, with all three noting how well Cheryl has learned to with the football star, who is much taller. Lindsey Stirling and Mark Ballas: 27/30
Coming off of their perfect score from last week, the golden couple was dealing with her painful rib injury, which resulted in a trip to the hospital on Sunday night. “I’m trying to find the balance of taking it easy or rehearsing,” Lindsey said. I’ve got this rib that I feel in pretty much every moment.”

While she wasn’t sure if she was going to perform, Lindsey managed to get through her routine, a paso doble set to her own song. But Tom Bergeron even needed to help her off the ground by the end of it, then sitting on the floor with her to rest during judges’ remarks. “I’m in pain, I’m not going to lie,” Lindsey admitted. Fortunately, it wasn’t all-pain, no-gain, as the judges were impressed by Lindsey and Mark’s paso.

Frankie Muniz and Witney Carson: 30/30
While he called last week’s performance “a disaster,” the partners were hoping to shake it off, collaborating on their creative contemporary dance. Or should we say creepy, as Frankie took on the role of Witney’s stalker in the dance, set to “Every Breath You Take.” But the judges were all about it, Len called it “fantastic,” and Bruno commended the storytelling and dramatic tension. Cue his first perfect score of the season! Malcolm isn’t in the middle, he’s out in front!

Drew Scott and Emma Slater: 27/30
Due to his intense filming schedule for Property Brothers‘ three shows, Drew and Emma were feeling the pressure during their rehearsals…especially after landing at the bottom of the leaderboard last week. But all the 5 a.m. wake-up calls were worth it, as their Charleston was a hit with the judges. “It was one of your best dances so far,” Carrie Ann said. Len added, “You’ve come back to life…I loved every minute of it!”

Next up, the team dances!

First up, Team Monster Mash, which consisted of Jordan and Lindsay, Lindsey and Mark, Terrell and Cheryl, and Nikki and Artem. While we loved the concept (the celebs were kids, the pros were monsters), it was  too “messy” for Len. They received a 24 out of 30, which is added to their individual scores.

Team Phantom of the Ballroom included Frankie and Witney, Vanessa and Maks, Victoria and Val, and Drew and Emma. A truly theatrical performance, the judges felt this team was more in sync with each other and could not stop gushing over the routine. “It was flawless in construction,” Bruno said, while Carrie Ann called it the best team dance in the show’s history. We agree! Of course, they received a 30 out of 30.

Were you shocked by the double elimination? Do you think the right couples went home?