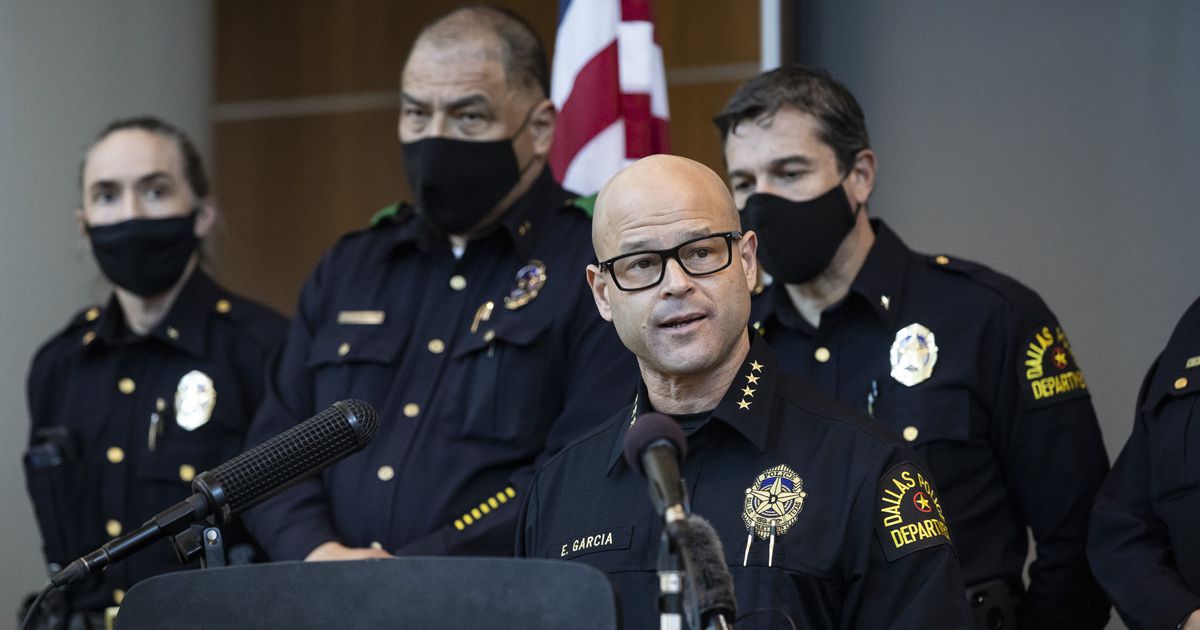 A Dallas police officer was arrested Thursday on two counts of capital murder after authorities said he ordered two hits in 2017.

Dallas morning news obtained an internal note from Police Chief Eddie Garcia, who told the department that Officer Bryan Riser, 36, was in custody.

He had not yet been booked into the Dallas County jail Thursday afternoon, according to a Sheriff’s Department spokesman. It was not clear if he had a lawyer.

“The actions of this officer not only tarnished the plaque, but they hinder the efforts of those who go out every day to inspire public confidence and create respect for the police profession,” Garcia said.

Riser, who joined the department in August 2008, is assigned to the South Central Patrol Division, according to a news release. He is currently on administrative leave pending the outcome of an internal investigation, the department said.

One of the victims, Liza Saenz, 30, was found dead in the Trinity River in March 2017, Garcia said at a news conference Thursday afternoon. The other victim, Albert Douglas, was kidnapped and killed on Riser’s orders, Garcia said.

Garcia said Riser was in a relationship with at least one of the victims.

“This individual doesn’t have to wear this uniform,” Garcia said, adding that the department was moving toward firing Riser. “I can’t be any clearer than that.”

Garcia added that former Dallas police chief U. Reneé Hall was aware of the allegations.

Hall confirmed to News who informed him that Riser was a “person of interest” in the murders. But being named a person of interest is not enough to secure a probable cause arrest warrant, he said.

Hall said a strategic decision was made, with guidance from federal police, homicide detectives and the Dallas County district attorney’s office, not to place Riser on administrative leave so authorities would not compromise the investigation of the murder. murder. She said that telling Riser he was under investigation might have given him a chance to cover his tracks.

He said he took credit to the work of detectives for today’s arrest.

“By doing something different, we may not have been able to do justice to the families today,” he said.

Boaters found Saenz’s body at Trinity, near the 200 block of Santa Fe Avenue, south of downtown Dallas, after hearing multiple gunshots on the night of March 10, 2017.

The mother of two was born in Corpus Christi and raised in Aransas Pass, according to her obituary.

Saenz’s mother, Mary Hodge, said Thursday that she had not learned of Riser’s arrest and said she was expecting a call from a detective. Hodge confirmed that Saenz knew Riser, but was unaware of the extent of their relationship.

Six months after Saenz’s death, in September 2017, three men, Kevin Kidd, Emmanuel Kilpatrick and Jermon Simmons, were arrested on capital murder charges in his death. Police said an anonymous informant led them to the suspects.

Kidd at the time told police that he encountered Kilpatrick and Simmons at the bottom of the river, after Kilpatrick had forced Saenz into a car at gunpoint. Kidd said he saw Kilpatrick shoot Saenz on the riverbank.

The trio were charged with three other murders that took place within a span of four days.

According to the affidavit for Riser’s arrest warrant, one of the three men (police did not say which one) came forward in August 2019 and said Riser was involved in Saenz’s murder as well as Douglas’s death.

The man said Riser came up with a plan to give him and his associates information about the drug houses, which they would rob and then split the proceeds, according to the affidavit. But that plan never came true.

Instead, the man told authorities, Riser identified a man he wanted to kill and offered to pay $ 3,500, the affidavit says. The man and one of his associates kidnapped that man, Douglas, and killed him, then dumped his body at Trinity, according to the affidavit.

Douglas was reported missing in February 2017 and his body has not been found, police said.

Several weeks later, Riser approached the man again and offered him $ 6,000 to kill Saenz, who he said was an informant, according to the affidavit. He and his associates took her to the same place where Douglas was killed, the affidavit says.

Police said data from Riser’s cell phone and patrol car placed him at the locations where the witness said they had gathered to plan the killings.

Dallas Mayor Eric Johnson said he was “sick” hearing the allegations against Riser.

“But I am grateful to our homicide detectives, who have worked to ensure that justice is served,” Johnson said. “My heart goes out to the loved ones of the victims. I cannot imagine the anguish they have endured. They, and all the people of Dallas, deserve answers in this case. “

Sergeant. Mike Mata, president of the Dallas Police Association, said Riser was placed on paid administrative leave pending a termination hearing. He said it was “devastating that a member of this police department was charged with something as horrible as capital murder.”

He said Riser should be held accountable if convicted.

“We do our best to make sure we hire the best human beings possible,” he said. “But just like any profession, we have people who don’t honor the insignia and they don’t honor the uniform.”

Terrance Hopkins, president of the Greater Dallas Black Police Association, said “this is a very unfortunate incident and, if true, unacceptable.” Riser was not a member of that police group, Hopkins said.

Neighbors said that Riser and his family moved in about a year ago and they were nice. They said there hadn’t been much unusual activity at the home before a patrol car pulled over Thursday.

Riser was charged in 2017 with a misdemeanor felony assault with family violence that caused bodily injury.

According to an arrest warrant affidavit, Riser’s girlfriend had an argument with him about a post on his Facebook page that said their relationship was over.

She told police that she wanted to post a photo of him on Facebook, but he did not want her to and asked her to leave her apartment, according to the affidavit. He said that she refused to go and hit him on the hand and head.

Riser said the woman struck him again after he called a patrol sergeant to ask for officers to be sent to his home and grabbed her arm, according to police documents.

The woman told police that Riser hit her arm and took away a cell phone that she had lent to a neighbor to call 911. According to the affidavit, she said he grabbed her arms, pulled her out of bed. and knocked her to the ground, and then dragged her and kicked her. He also said that he picked her up, brought her to the door of the apartment and threw her out.

The outcome of that case was not immediately clear; it does not appear in the Dallas County court records.