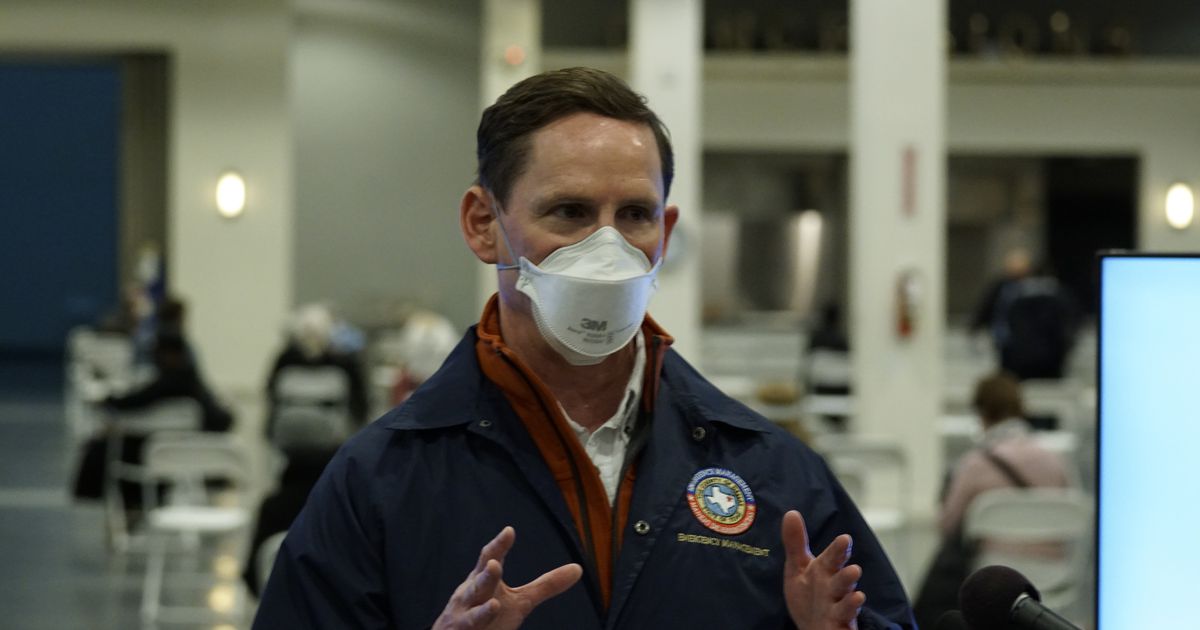 The state is penalizing tens of thousands of people waiting for the COVID-19 vaccine after drastically reducing the number of doses it shipped to North Texas’ two largest counties, Dallas County Judge Clay Jenkins said Monday.

The Texas Department of Health and Human Services announced last week that it would dramatically reduce the number of vaccines it shipped to Dallas and Tarrant counties, as the federal government was ready to open sites here that will vaccinate 126,000 people.

Jenkins said the cut means Texans across the state will have to wait at least three weeks for a chance to get vaccinated in Dallas or Tarrant counties.

That’s because vaccines for North Texas from the Federal Emergency Management Agency for the next three weeks are reserved for the region’s most vulnerable residents in specific neighborhoods. Meanwhile, state-licensed providers, such as the Dallas County Health Department, must vaccinate anyone who meets the state’s eligibility requirements, regardless of where they live.

“North Texas should not be punished,” Jenkins said, criticizing the state for its decision during a virtual meeting with The Dallas Morning News Editorial board. “There is no reason why our effort to get more vaccines that does not harm the state for a vaccine should result in the state effectively defrauding our residents.”

A spokesman for the Texas department of health said last week that new federal resources in Dallas and Tarrant counties allowed the state to ship vaccines to other counties that had not received an equitable allocation.

However, the state this week did not cut the number of vaccines it shipped to Harris County, which includes Houston, where a third FEMA-run site is expected to open this week. The health department said the state’s largest county had not received a good number of vaccinations based on population.

The launch of federal distribution programs this week represents a dramatic escalation in vaccines for the state, which has already inoculated more than 3 million people with at least one of two doses. Including vaccines distributed directly by FEMA, Dallas and Tarrant counties are expected to see a slight increase in the total number of vaccines. It’s not the dose windfall, however, that North Texas leaders expected.

The state’s decision to reduce the number of doses is not a surprise. State officials, in the days after the announcement of the federal program, telegraphed that a reduction would be possible.

The state sets the number of doses each county center receives each week. And, Jenkins said, the state health department has already signaled its willingness to restore the county’s allocation. A department spokesman did not confirm any conversations between Jenkins and the health department, but said no decisions had yet been made about next week’s doses.

At one point during Jenkins’ meeting with News’ editorial board, suggested without evidence that Gov. Greg Abbott had a role in reducing shots fired.

“This governor, you know, is very interested in the day-to-day running of things,” Jenkins said. “But I don’t have a window that I can share in the ongoing conversations with the governor and his team about these vaccine allocations.”

An Abbott spokesperson said it was the health department’s Vaccine Allocation Expert Panel, not the governor’s office, that decides how many vaccines each provider receives. The panel is made up of a group of 17 doctors, state officials and legislators.

Jenkins and Abbott have been at odds since the beginning of the pandemic.

All three FEMA sites are expected to open on Wednesday and by appointment only.

In Dallas, residents of 17 zip codes from all corners of the county will be invited to get vaccinated. The areas were selected based on a variety of factors, including age and concentration of chronic diseases.

Neighborhoods in selected zip codes based on federal government criteria include: Forest Meadow at 75243 on the north side of town; in the east, the Club Estates and Casa Ridge Heights sub-developments at 75150 Mesquite; in the south, Joppa and Dallas College Cedar Valley Campus at 75241; and in the west, the Plymouth Park and Irving Heights neighborhoods at Irving’s 75061.

So far, Dallas County has identified about 18,000 people who qualify for the vaccine in those zip codes, Jenkins said. It was unclear Monday how many people had booked appointments.

Registering Black and Latino residents, those who are older or who do not have access to the Internet has been difficult for the county. Jenkins was scheduled to lead a conference call with City Council members and religious leaders Monday night to discuss ways to enroll residents in those neighborhoods.

If the county cannot cover all appointments with residents in the 17 zip codes, they will expand to other neighborhoods using the same criteria, Jenkins said.