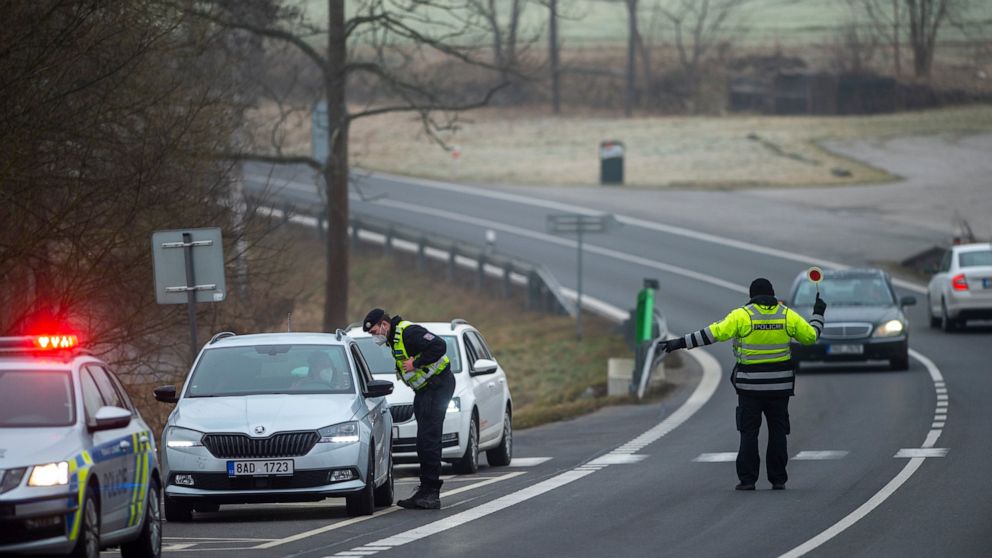 Czech police and military forces have set up 500 checkpoints across the country to enforce strict new limits on free movement.

PRAGUE – The Czech Republic’s police and military forces set up 500 checkpoints across the country as one of the worst-hit nations in the European Union marked the first anniversary of its coronavirus outbreak on Monday by significantly limiting free movement. .

Some 30,000 officers participated in an unprecedented operation to enforce a new strict restriction that prohibits people from traveling to other counties unless they are going to work or have to care for relatives.

It is part of a series of measures that took effect on Monday as the Central European nation seeks to curb the spread of a highly contagious variant of the virus that was first found in Britain.

Prime Minister Andrej Babis said the goal of the move was to prevent the country’s hospitals from collapsing under the stress of caring for COVID-19 patients.

Amid a flurry of UK variant infections, of the 7,049 COVID-19 patients in Czech hospitals on Sunday, 1,507 required intensive care. Both numbers are close to the records set early last week.

Since the Czech Republic recorded the first three people infected with coronavirus on March 1 of last year, the nation of 10.7 million has seen more than 1.24 million confirmed cases with 20,469 deaths.

As of Monday, people in the Czech Republic who go out to exercise should not leave their municipality. Kindergartens and schools for children with disabilities were also closed, while only stores selling basic goods remain open.

Experts, however, say the measures do not go far enough to stop the virus.

“I consider the most important measures to be those that have not been applied,” biochemist Jan Trnka told Czech public radio. “That is to limit contacts at work, especially in industry.”

The government also approved a plan to require mandatory mass testing of employees. It will start at companies with more than 250 workers on Wednesday followed by those with at least 50 employees on Friday.

Industry and Commerce Minister Karel Havlicek said around 10,000 firms and companies are expected to test 2.1 million workers in the next two weeks.

Havlicek has previously rejected calls to close at least some plants and factories as “unrealistic.”

Meanwhile, the country is accelerating its vaccination program with general practitioners joining the vaccination centers. More than 650,000 doses of vaccines have been distributed. Babis said 1 million vaccines were expected to arrive through an EU program in March and another 2.6 million in April.

As a sign of solidarity, three states in neighboring Germany have sent 15,000 doses of the AstraZeneca vaccine to the Czech Republic to try to control the contagion at the border.

Babis and pro-Russian President Milos Zeman also said they would use the Russian Sputnik V vaccine even if it is not approved by the European Medicines Agency.