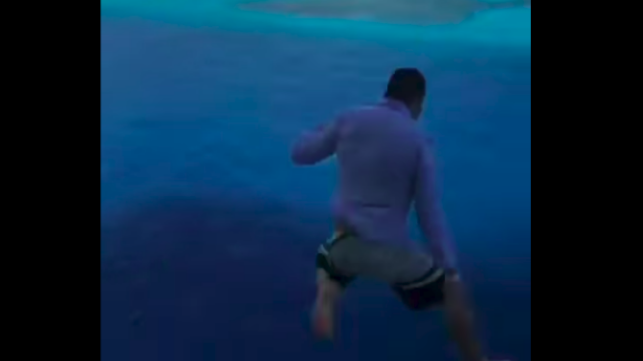 Nick Naydev, a 27-year-old pbadenger of the Royal Caribbean cruise ship Symphony of the Seas, has been expelled from the line's fleet for life after jumping off his deck balcony 11 into the sea. The trick was captured on video and posted on Instagram on January 11, and has received more than 200,000 visits.

"This was stupid and reckless behavior, and he and his companions have been forbidden to sail with us again," Royal Caribbean said in a statement to the media. "We are exploring legal actions."

Naydev estimated the height of the fall by approximately 100 feet, but he emerged almost unharmed, except for several days of difficulty walking. The Symphony was moored in Nbadau, and Naydev was quickly pulled out of the water by a pbading boat.

Once Naydev was safely on the ground, the ship's security personnel told him that he would have to find his own way home. They also took their friends out of the ship.

"I did not think about this before jumping in. My idea was that it would be a good laugh for my friends and that I would simply swim back to shore and continue my vacation and I never thought that this would be so serious," he said in a social interview. Publication in the media. "The local police were called … to pick us up from the ship, but fortunately the police thought the whole situation was funny and did not proceed to present any legal action."

The same day that Naydev posted the video, a teenage pbadenger on the Royal Caribbean ship Harmony of the seas He died after falling from the ship to the dock in Labadee, Haiti. The victim, Laurent Mercer, 16, fell trying to climb between two balconies; According to the local medical examiner, he did not have the card for his room and was trying to enter through the adjoining cabin.

According to researcher Ross Klein, of the Memorial University of Newfoundland, since 2000, approximately 314 people have gone sideways in cruise ship / ferry incidents and crew members, based on reports published by the main operators. The rescue rate averaged about 17 percent.