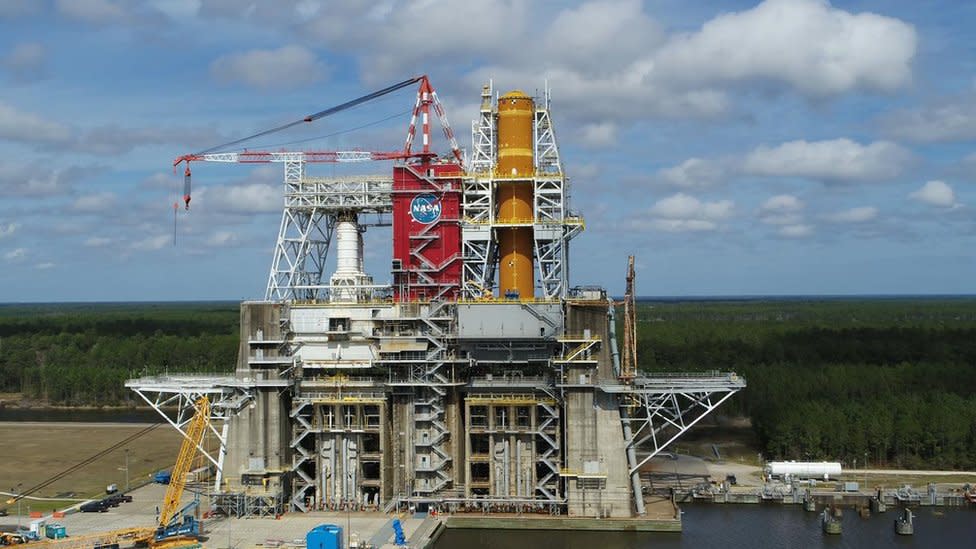 The core of the giant NASA rocket that returned astronauts to the moon has undergone a critical test.

For the first time, engineers fully loaded a main stage of the Space Launch System (SLS) rocket with super-cold liquid propellant, controlled it and then dried the tanks.

It is propellant fuel and an oxidizer – a chemical that burns the fuel.

Engineers wanted to test what was expected of SLS before making its first flight in about a year’s time.

It was part of a test program known as Green Run, which was being performed at NASA’s Stennis Space Center near Bay St. Louis in Mississippi.

This assessment, known as the Wet Dress Rehearsal (WDR), was the seventh of eight trials on the core stage. NASA said the rocket responds well to loaded propellants. But minutes before the trial was planned, an unexpected shutdown was experienced.

However, the completion of the WDR should lead to the installation of the eighth and final test – a “hotfire” – where all four RS-25 engines will be fired simultaneously for the first time, depending on the core.

This very rocket segment will be the first mission known as NASA’s Moon Exploration Plan – Artemis. The mission, scheduled for November 2021, will send the next generation Orion spacecraft on a loop around Earth’s only natural satellite.

There will be no crew for this test flight. But the third Artemis mission, in 2024, will land the first humans on the lunar surface since the Apollo 17 mission in 1972.

The Green Rocket Run helps ensure any issues before the complex rocket segment is taken to Florida to prepare for launch.

Over the course of several hours, Stenson’s engineers loaded the core phase with 700,000 gallons (roughly 2.6 million liters) of liquid hydrogen and oxygen.

“This is an incredibly exciting time,” said Jim Messer, senior vice president of Aerojet Rocketdyne, which built the AR-25 engine. “We’re really getting to some of the most important aspects of the testing program.”

The rocket section is anchored to a massive steel structure called the B-2 test stand, which was once used to test engines for the giant Saturn V rocket carrying astronauts to the moon in the 1960s and 70s. Was.

The propellant was brought through the waterway to the site on six badges that winds through the grounds of the Stannis Space Center.

The bar stand was placed near the test stand, while the super-cold (cryogenic) propellant was placed in the core stage.

Hydrogen and oxygen are gaseous at room temperature, but gases take up a lot of space. Turning them into liquids allows a small amount to be stored in a similar amount.

After being filled, the tanks need to be kept up – refill – continuously because at such low temperatures the liquids boil over time.

During the test, the fluids were caused by the flow through the turbopump – which feeds the propellant to the engine combustion chambers – and the engine itself. This helps prepare the system for starting.

It is all possible what happens in the hour before an actual flight. “We’re just trying to get as much data as we can so that, on the next run, we move on. And we want to find anything that can improve during this wet costume to get the hotfire ready, “Ryan McKibben, Green told BBC News, run test conductor for NASA.

On its Artemis blog, NASA stated: “At first the data appears to have performed well during the propellant loading and refill process.”

When all this was happening, NASA and Boeing – SLS’s prime contractors – performed a fake launch countdown. All of those calculations were due to T-minus (remaining time) moving to the 33 second point.

But NASA said the test ended minutes after the planned countdown period. Teams are evaluating the data to pinpoint the exact cause of the initial closure.

In October, John Shannon, Boeing’s vice president and SLS program manager, reported, “We will spend about two weeks looking at the data to ensure that all systems behave as expected.

“We will go out and inspect the vehicle, making sure there are no surprises.”

If the data looks good, the engineers will proceed with the “hotfire”.

The SLS rocket consists of a huge core stage consisting of two small boosters pulled to the sides. Based on this, four powerful RS-25 engines are of the same type now used by retired spacecraft orbiters.

The projector provides the raw power needed to send Orion into space and then propel it toward the moon.

Last month, Stannis engineers removed a component called a clutch on one of the four former valves and supplied liquid hydrogen to the RS-25 engine. The pre-valve had shown inconsistent performance during the tests.

Officials plan to ship the giant core to keep SLS at its launch site by 14 January at Kennedy Space Center in Florida.

Last week, NASA said the Artemis-1 mission was on track to launch in November 2021

Green Run has progressed quite smoothly; There was a five-week halt due to Kovid-19. In addition, on-site work had to be stopped six times due to tropical weather, especially given the active storm season.

“It is very important for us to organize this event,” NASA’s SLS manager John Hancutt said during a press conference in October.