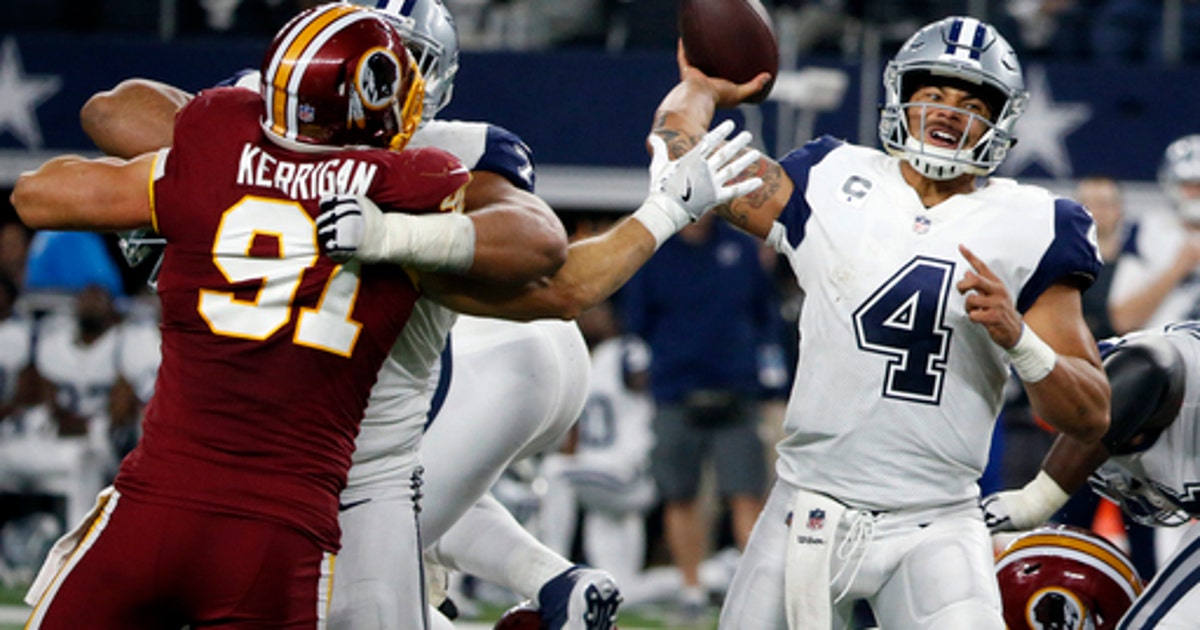 EAST RUTHERFORD, N.J. (AP) The New York Giants' firing of coach Ben McAdoo and general manager Jerry Reese may have made things tougher on the Dallas Cowboys in their fight to stay in the playoff race.

A week ago, the Cowboys (6-6) ) Probably looked forward to playing the Giants (2-10) at MetLife Stadium with either Geno Smith or rookie Davis Webb running New York's offense under McAdoo's plan with his quarterbacks after benching Eli Manning.

The Monday upheaval in the Meadowlands that.

Defensive coordinator Steve Spagnuolo was the interim head coach after the firings and his first decision was to restore the 36-year-old Manning to his familiar starting role. [19659002] "It's our hope to unite, restore and find a way to win football games," Spagnuolo said. "When I mean restore, you know, restore Giant pride. It's hard to be real prideful when you do not win a lot of football games. But, I think the guys feel that. They understand it and we'll function that way going forward. "

Having the Cowboys in town will be the ante for the Giants. They are probably New York's biggest rival and all the players have to remember this dreadful season kicked off with a loss in Dallas.

"I'm sure they'll have a different energy," Cowboys quarterback Dak Prescott said. "Like you said, it's some changes up there. New coach, Eli back in there. It's also Cowboys-Giants. It's going to be there, and it's going to be there, because it's a rivalry, it's a division and it's two teams that are playing for pride, a lot of pride and then obviously playoffs. "

The Cowboys are two games out of a wild-card spot with four games left in the regular season. Besides the Giants, they also face Oakland (6-6), Seattle (8-4) and Philadelphia (10-2). They had 10 days to prepare for this game.

"I mean it's just playoff starts now," said Prescott, who threw two touchdowns in a big win over Washington on Nov. 30.

"Simple as that. You've got to embrace it. If you play this game and you do not love … If you do not love the fact that your back is against the wall and it's about what you do every week or every day that it pays off on Sunday, that's what makes this game fun . "

Manning is also looking to have a little fun after seeing his streak of 210 consecutive starts snapped last week in Oakland. He ran the scout team in practice last week and served as the backup to Smith.

"I'm excited," said Manning, who has started 27 games in his 14-year career against the Cowboys and thrown 50 touchdowns. 19659002] "Excited about the opportunity to play this week, get back on the field with teammates and go play against the Dallas Cowboys. I've played these guys a bunch and I look forward to going out there in our home stadium and trying to get a win. "

Here are some things to watch Sunday:

BACK IN THE SADDLE: Dallas linebacker Sean Lee is expected to return after missing three straight games with a hamstring injury. The 2016 All-Pro missed two games earlier in the season as well. The Cowboys missed him badly after he had left at the Atlanta with the injury, and then he had lopsided defeats against the LA Chargers and Philadelphia.

The defense turned to the corner against the Redskins with a season-high four takeaways and key stops to help put the game away. Dallas was 0-5 in games Lee 19: 599002 TIGHT END SOLVED: The Giants allowed an opposing tight end to catch a touchdown in each of their first nine games, starting with Jason Witten of the Cowboys. They have stopped that streak in the past three games. Witten is a problem. He has 153 receptions and 14 TDs against Giants, his most against any opponent.

PAIR IN PAIN: Dallas tackles Tyron Smith (left) and La'el Collins (right) both are battling back problems that have limited their practice time. Collins did not practice at all last week, but played against Washington.

Smith had issues last season and missed two games this season when he was also battling a groin injury. Collins has not missed a game and says he does not expect that to change against the Giants.

ENGRAM EVERY DOWN: Rookie Evan Engram has become the go-to guy for the Giants. The first-round draft pick leads the team with 51 catches for 569 yards. His six touchdown catches are a team record for a tight end rookie.

PLAY CALLING: With McAdoo gone, coordinator Mike Sullivan will continue calling the plays for the offense.

Spagnuolo has called the defenses since returning here in 2015. He will probably call the plays Sunday. If not, expect Dave Merritt, who coaches the safeties, to make the calls