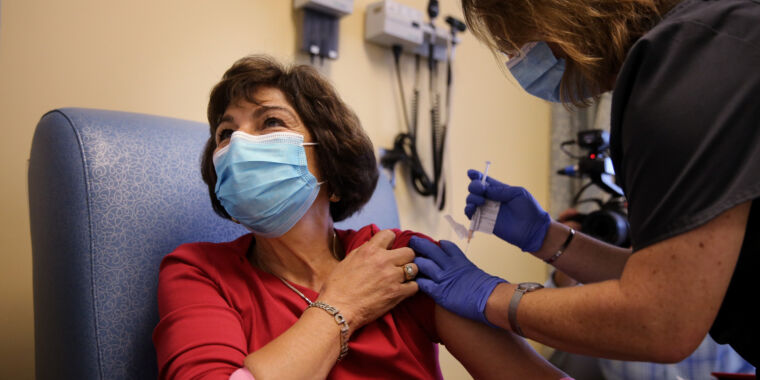 In an extraordinary move on Tuesday, nine top pharmaceutical officials made a public pledge that they would not release a COVID-19 vaccine prematurely and they only received federal approval to deliver the vaccine only after meeting strict ethical and scientific standards Will explore

The pledge was signed by the CEOs of AstraZeneca, Bayonet, GlaxoSmithKline, Johnson & Johnson, Merck, Modern, Novavex, Pfizer and Sanofi. All represented companies are working on COVID-19 and Char-AstraZeneca, a vaccine against Moderna, and vaccines in Phase 3 clinical trials in a joint venture between BioNTech and Pfizer.

The tone appears to be a coordinated resistance to pressure from the Trump administration, pushing for the rollout of a vaccine until November 1, just before the presidential election. Last week, the Centers for Disease Control and Prevention asked states to get ready to distribute vaccines by 1 November.

Critics have called the timeline unrealistic, noting that it is unlikely vaccine developers will have enough data from Phase 3 trials until that time, let alone create the necessary vaccine manufacturing and distribution infrastructure. He also said that the pre-election goal of releasing the vaccine appears to be entirely based on politics, not public health.

At a press conference on Monday, President Trump denied that he was pushing for the distribution of the vaccine or pre-election release for political reasons. However, his refusal was undermined in the context of pre-election releases. In his opening remarks, Trump said that we could ” [a vaccine] During the month of October … the vaccine will be very safe and very effective, and will be delivered very soon. You can – you can be a huge surprise.

At one point in the question-and-answer session with reporters, Trump apparently said on Election Day, “So we’re going to have a vaccine very soon, maybe even before a very special date. You know what I I am talking about the date. ”

Such politicization of public health efforts amid the epidemic has already taken its toll. Public confidence in the CDC and the Food and Drug Administration has eroded following dubious decisions and vicissitudes. And although COVID-19 vaccines are still in various stages of testing, several surveys have already indicated that the public is wary of the vaccine that eventually receives federal approval.

Nine pharmaceutical companies are trying to politicize their potential vaccines as well as calm public concern that a final vaccine will be thoroughly tested for safety and efficacy.

For example, the companies noted that the FDA stated that scientific evidence for regulatory approval must derive from large, high-quality clinical trials that are randomized and observer-blind, significant for participants with diverse populations. Expect appropriately designed studies with no. . ”

He pledged to “just submit” [a potential vaccine] For approval or emergency use authorization after demonstrating safety and efficacy through Phase 3 clinical studies to meet the requirements of specialist regulatory authorities such as FDA. ”

The companies said: “We believe that this pledge will help ensure public confidence in the rigorous scientific and regulatory process by which COVID-19 vaccines are evaluated and ultimately approved.”

Such a message was recommended in another open letter released last week by the trade organization Biotechnology Innovation Organization (BIO). The letter called for biotechnology companies to exclude “key principles” to ensure “integrity, transparency, and objective evaluation” of COVID-19 treatments and vaccines. With this, the organization also pressured that the FDA “must maintain its historical independence as a gold-standard international regulatory body, free from outside influence.”

“Political views should be set aside by Republicans and Democrats alike,” the letter said. “Our nation’s leaders must assure the public that politics will not affect the development and approval of new drugs.”