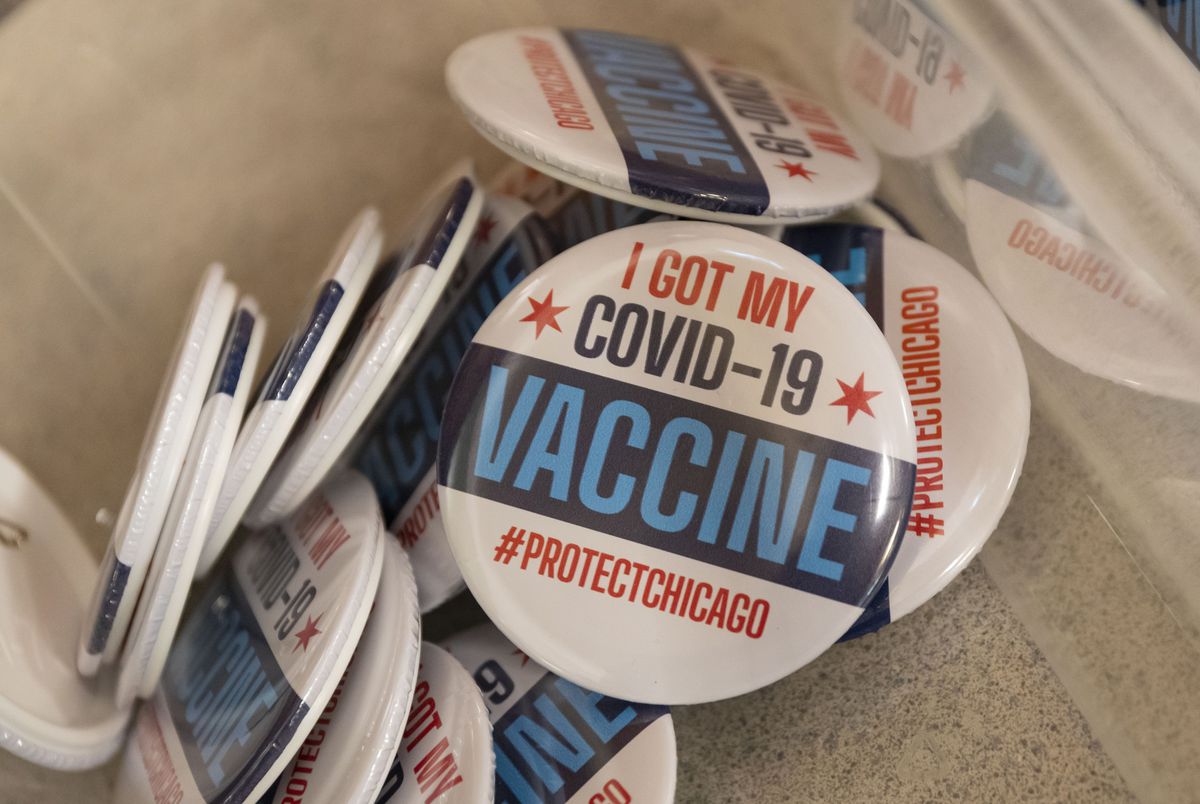 The number of Illinois residents who have been fully vaccinated, who received the two required vaccinations, reached 906,490, or 7.11% of the total population.

Governor JB Pritzker announced that the state will open mass vaccination centers in Des Plaines and Quincy on Thursday. The sites are expected to deliver 4,000 combined doses per day when at full capacity.

Also, Chicago may be getting another mass vaccination site. The Chicago Cubs and Advocate Aurora Health said Tuesday that they are partnering on a plan to provide COVID-19 vaccines at Wrigley Field.

Advocate and the Chicago Cubs confirmed they were working to bring another mass inoculation center to the ballpark in Wrigleyville to the nation’s third-largest city, as hundreds of thousands of residents are still waiting for their first dose based on current eligibility requirements.

Meanwhile, residents 65 and older can begin scheduling appointments Thursday for vaccinations at the United Center, the city’s first mass vaccination site, capable of inoculating up to 6,000 people per day. The site will open next week.

Officials also said Illinois is expected to receive more than 100,000 doses of the newly approved Johnson & Johnson vaccine this week. State officials said more than 90% of its 83,000-dose supply will be distributed to mass vaccination sites. The city of Chicago, which sources its own supply of vaccines, is receiving 22,300 doses.

Here’s what’s happening with COVID-19 in the Chicago and Illinois area on Wednesday:

Transportation workers, from train operators to rideshare drivers, will be able to obtain COVID-19 vaccines at new distribution sites at O’Hare International Airport, and some airline employees will be able to get vaccinated starting Thursday.

A vaccination site at the Hilton Chicago O’Hare Airport Hotel open to all transit workers will be able to administer 2,500 vaccinations per week, said Matt McGrath, a spokesman for the Chicago Department of Aviation. To add capacity, O’Hare’s largest airlines, United Airlines and American Airlines, will operate separate vaccination sites at the airport for their employees and contractors.

All O’Hare sites will administer doses of Johnson & Johnson vaccine obtained from the Chicago Department of Public Health.

At the O’Hare Hilton site, Federal Emergency Management Agency staff will begin vaccinating first responders and security workers on Friday before expanding access on Monday. All O’Hare and Midway Airport employees, including those who do not work for airlines, will be eligible, as will Metra, CTA and Pace employees, taxi drivers and rideshare drivers who live or work in Chicago.

Two Memorial Health System pharmacists were fired after one of them brought COVID-19 vaccines home to family members and inappropriately mixed doses at the system’s Decatur hospital in December, according to recently released emails. from the Illinois Department of Public Health.

A pharmacist “took the doses home at the end of the day and administered them to her family,” according to an email sent to federal officials Jan. 20 by Heidi Clark, chief of the health department’s Infectious Diseases Division. of the state. The pharmacist also “pooled the doses in the Pfizer vials to extract more vaccines beyond the six doses,” at Decatur Memorial Hospital, according to the email.

Angie Muhs, a spokeswoman for the Memorial Health System, confirmed in an email that one of the pharmacists diverted two doses. Family members of that pharmacist were not eligible for vaccinations at the time, he said.

She declined to answer a question about the other pharmacist’s involvement in the incidents.

12:49 pm: More than 2.9 million doses of COVID-19 vaccine have been administered in Illinois as the state prepares two new mass vaccination sites

The number of Illinois residents who have been fully vaccinated, who received the two required vaccinations, reached 906,490, or 7.11% of the total population.

During the past seven days, the state’s daily average of vaccinations was 84,202.

Illinois health officials announced 2,104 new confirmed and probable COVID-19 cases and 44 additional deaths on Wednesday, bringing the total number of known infections in Illinois to 1,191,520 and the death toll statewide to 20,626 since the start of the pandemic.

President Joe Biden and Democrats agreed on Wednesday to tighten income limits above which people could qualify for stimulus checks, a Democratic official said, an important concession for moderates as party leaders prepare to pass their $ 1.9 trillion coronavirus relief bill through the Senate.

The COVID-19 relief measure that Senate Democrats planned to unveil will also retain weekly $ 400 emergency unemployment benefits that were included in a version of the legislation passed by the House, the official said. The person spoke on condition of anonymity to describe Democratic internal conversations.

The changes came with Republicans, who may unanimously oppose the legislation, criticizing the bill as an overrated Democratic wish list that lavishes help for many who don’t really need it.

In a 50-50 Senate where Democrats must stand together, moderate parties have been pushing to refocus spending on the bill more closely on those who should be affected by the pandemic and the resulting economic slowdown.

6 am: The pandemic is crushing sleep. Here are 5 tips to help you sleep better.

This pandemic has impacted everything, so it is not surprising that it has also interrupted our sleep.

We are concerned for everyone in our lives, we drink too much alcohol and coffee, and even when we are in bed, we often do not experience good quality sleep.

Those are just a few of the reasons psychologist Michael Breus points out that it makes perfect sense for people to deal with sleep problems. Studies have revealed insomnia and other sleep problems during the pandemic.

“We just aren’t able to handle this level of stress, and of course it comes out while we sleep,” Breus said.

Here are some recent stories related to COVID-19.