COVID-19 Tracking in Alaska: 346 Cases and 1 Death Reported Since Friday 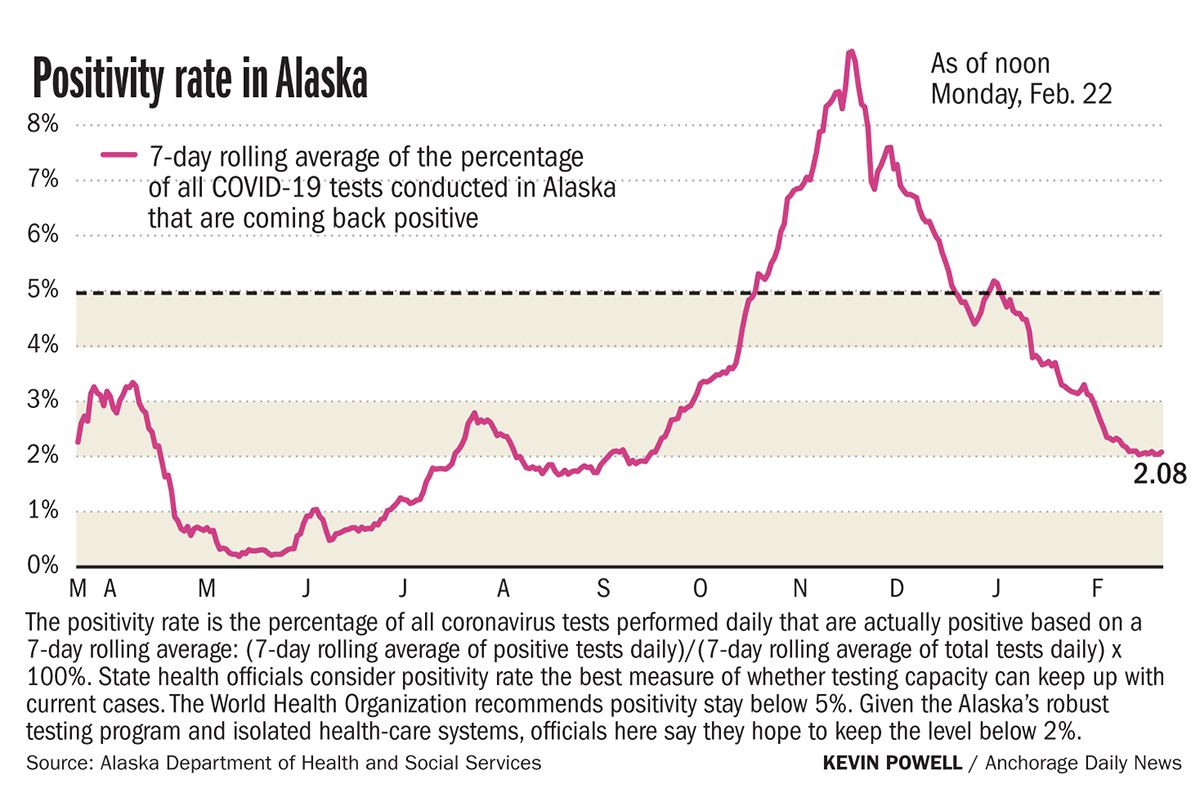 The department no longer updates its coronavirus dashboard on the weekend or on holidays. Monday’s update includes cases that would have been reported over the weekend.

The coronavirus-related death of an Anchorage woman who was in her 70s was reported over the weekend. In all, 287 Alaskans and two non-residents with COVID-19 have died since the pandemic hit the state in March.

Alaska’s per capita death rate remains among the lowest in the country, but the size of the state and the vulnerable health care system complicate national comparisons.

The case count in Alaska has been steadily declining for the past two months, following a spike in November and early December that exhausted the hospital’s capacity before stabilizing. Hospitalizations in Alaska are now less than a quarter of what they were during the peak in November and December.

By Monday, there were 35 people with COVID-19 in hospitals across the state, including five they were on fans. Other four the patients were believed to have the virus.

The COVID-19 vaccine arrived in Alaska in mid-December. By Monday, 142,531 people – nearly 20% of Alaska’s total population – had received at least their first vaccination, according to the state’s vaccine control panel. That is well above the national average of 13.1%.

Healthcare workers and nursing home staff and residents were the first people prioritized for the vaccine. Alaskans 65 and older became eligible in early January, and the state further expanded the eligibility criteria this month to include educators, people age 50 and older with a high-risk medical condition, essential first-class workers. line 50 years or older and people who live or work in congregation. settings such as shelters and prisons.

Despite the lowercase numbers, all but four of Alaska’s regions are still in the highest alert category based on the current per capita infection rate, and public health officials continue to encourage Alaskans to keep up with personal virus mitigation efforts, such as hand washing, wearing masks, and social distancing. A highly contagious variant of the virus arrived in Alaska last month.

Of the 311 cases reported among Alaska residents on Monday, there were 74 in Anchorage, plus seven in Eagle River, four in Chugiak and three in Girdwood; 65 in Wasilla; 32 in Fairbanks plus 11 in the North Pole; 22 in Palmer; 18 in Juneau; seven in Ketchikan; seven in Petersburg; four at Bethel; three at Dillingham; three in Soldotna; two in Córdoba; two in Kenai; two in Sitka; one in Big Lake; one in Homer; one in Hooper Bay; one in Seward; one in Utqiagvik; and one in Wrangell.

Among communities with populations of fewer than 1,000 residents unnamed to protect privacy, 16 cases were reported in the Bethel census area; seven in the Yukon-Koyukuk census area; six in the Kusilvak census area; three in Denali Borough; two in the municipality of Matanuska-Susitna; two in the northwestern Arctic district; one in the Copper River census area; one in Fairbanks North Star Borough; and one in the Yakutat region plus Hoonah-Angoon.

35 cases were also identified among non-residents: 24 in Unalaska, three in Aleutians East Borough; one in Anchorage, two Fairbanks, one in Prudhoe Bay and two in an unidentified region of the state.

Of all the tests done in the past week, 2.08% came back positive. Officials have said that a positivity rate greater than 5% indicates high rates of spread in the community and there is insufficient evidence.