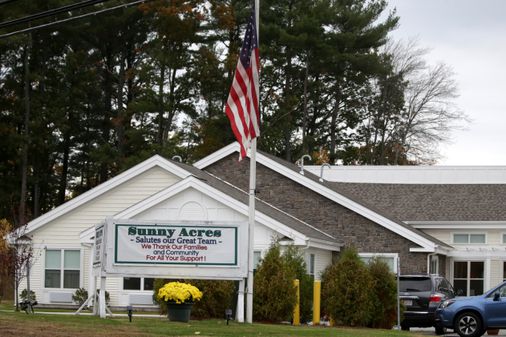 According to a city official and the State Executive Office of Health and Human Services, five residents of a Chelmsford nursing home have died since October 15 in connection with a COMID-19 outbreak, infecting dozens more residents and staff is.

Soo Rosa, director of public health in Chelmsford, confirmed that 47 residents and 17 staff members at the Sunny Acre Nursing Home and Rehabilitation Center tested positive for coronovirus, which infected about 145,000 residents in Massachusetts.

“A quick response team from the Department of Public Health is working closely with Sunny Acre,” Rosa said in an e-mail Friday night.

He deferred to the facility director for further comment. The state’s rapid response team has been in place since 9 October

In a brief telephone interview Friday afternoon, Jeff Schwartz, administrator of the Sunny Acre Nursing Home and Rehabilitation Center, said five residents died between October 15 and Thursday. He added that the facility has now “approved the separation period.”

Schwartz declined further questions and referred to posting on the facility’s website, signed by Schwartz and the administration.

“During routine COVID-19 surveillance testing in recent September, it was indicated that several residents had tested positive for COVID-19,” the statement said. “Unfortunately, it has proved impossible to keep a fast-spreading and highly contagious virus outside this center.”

Long-term care facilities such as residents of nursing homes among the population most hit by COVID-19. At the onset of the epidemic, the virus passed through facilities across the state, resulting in a high number of deaths. According to the state’s Department of Public Health, there were potentially 25,452 possible or confirmed cases of COVID-19 in residents and workers across the state on Friday, and 6,323 deaths.

In its statement, Sunny Acre said it has conducted more than 1,600 PCR tests on residents and staff and has not reported a positive test result for 15 weeks until this September.

“We are following all state and CDC guidelines for the safety of our residents and employees,” the statement said. “All family members receive regular updates on the status of their family member, and administration staff has provided operational communication to families and employees, revealing the situation.”

According to an executive office for Health and Human Services spokesperson, the state sent a rapid COVID response team to the Chelmsford facility on 9 October, and the team helps operators work towards preventing further spread of the disease. Two shipments of PPE from state reserves have also been delivered to the facility in recent weeks.

According to Schwartz, the facility has completed its 14-day period of isolation.

“The good news is that many of our residents have passed their 14-day separation period, and are on the road to recovery,” he wrote. “We are monitoring their progress very closely.”

Schwartz also commended our courageous staff for their commitment and dedication in providing the highest quality of care to all our residents during very challenging and difficult periods. He is a true hero. We would like to thank our families for their support. “

Chelmsford is one of 77 cities and towns in Massachusetts to specify a higher risk in this week’s data, meaning they have more than 8 new cases per 100,000 residents in the past 14 days, which is a result of public health The department has reported. Last week’s report there were 63 communities in the Red Zone, up from 40 weeks ago. The statewide average also remained in the Red Zone.

Travis Anderson and Emily Sweeney of the Globe Staff.